Pasadena mayor says no to 710 extension

Press conference starts at 8:30. You can leave at 9am.

Meeting place: Outside, in front of Metro Headquarters Building,
next to the LAX bus circle @ 8am.

There is parking under the Metro Headquarters Building, not free.
The Gold Line is a great option, since the end of the line is next door to Metro's building.
(behind Union Station)

(This appeared in The Source, Metro's Blog.)


The 710: spine of the L.A. freeway system and its missing link (San Gabriel Valley Tribune)

A very long story takes a more comprehensive look at the 710 freeway and issues facing it, including two Metro studies underway to improve traffic on the southern end by adding truck lanes and a study in the north end that seeks to improve traffic in the gap in the 710 between Alhambra and Pasadena. One big issue: how to cope with freight from the ports? Another issue: not everyone agrees there is a gap, with those opposing a potential tunnel saying it would be a freeway “extension,” not a gap closure. Putting aside arguments over semantics and facts — it’s a fact there is gap in the northern 710 — the real issue being debated is this: can we ever improve freeway performance or is it all for naught because new roads tend to quickly fill up with traffic?

If the 710 extension push is about freight traffic, how come there are no freight-only alternatives being considered? E.g. an expansion of freight rail or a 2-to-4-lane truck-only tunnel.


Saying there is a “gap” at the north end of the 710 is like saying there is a gap anywhere else where the once-planned LA freeway system was not “completed.” There is a gap between the 2 and the 101, which was never completed. And in fact, a gap between the 2/101 and the 405, since that freeway was supposed to cut straight through Beverly Hills and junction with the 405. Now that would probably “ease congestion on [westside] surface streets,” which Metro is touting the 710 extension would do for west SGV surface streets. There’s also a gap between the 90 and the 110. How about we complete that by turning Slauson into a freeway, as once planned? That would also remove all those surface street cars on Slauson and put them in a freeway instead. Sounds great right? We’ll remove LOTS of surface street congestion!
Oh, oops, you mean we’ll just take them from surface streets and put them on a freeway instead? And that even more cars would join in the fray? And lots of trucks too? Oh, and that the freeway will operate at Level F from day one, as Metro’s own studies show? Hmm… doesn’t sound so great after all…


Yu-Han, technically there is a bit of the 710 in Pasadena, from the 210/134 down to almost California (as a freeway), and then to Columbia as a surface street.
http://en.wikipedia.org/wiki/Interstate_710


Hi Yu-Han;
This is undoubtedly a controversial project and the issue of the 710 in the northwestern San Gabriel Valley has been controversial for many decades. Everyone, of course, is entitled to their opinion about what, if anything, should be done about car traffic and congestion in the area. As you know, studies are underway to see what different alternatives may accomplish in terms of improving travel times (among other things) in the study area. It’s being studied because nearly 68 percent of voters in L.A. County approved the Measure R slate of transportation projects. I think it’s good that Metro is respecting the will of the voters and studying the issue. Decisions on what, if anything, will be built will come later and be made by the Metro Board of Directors, most of whom are elected to office.
While opinions are one thing, facts are another. And the fact is that the original plans were to build the 710 from Long Beach to Pasadena. And the fact is that there is a gap in the 710 between Valley Boulevard and the short stub of the freeway built south of the 210/134 junction in Pasadena. This is something you can see clearly on maps and this is something you can see clearly in person. It’s somewhat of a different situation than the 2 freeway, which ends at Glendale Boulevard. There is no other part of the 2 freeway west of its western terminus.
I do understand there’s a broader issue here — the issue of adding to the freeway system and what that might accomplish. Some people say it will bring further traffic, others say that done strategically it can help improve bottlenecks. That’s a public policy issue worthy of debate and you articulate some of the arguments against in your comment. But let’s debate the real issues and not divert to whether or not something actually exists.
Steve Hymon
Editor, The Source 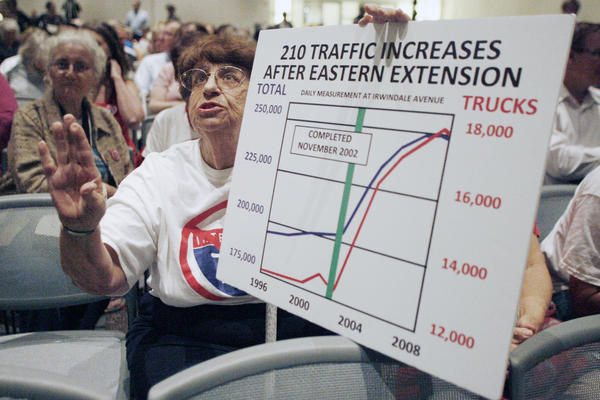