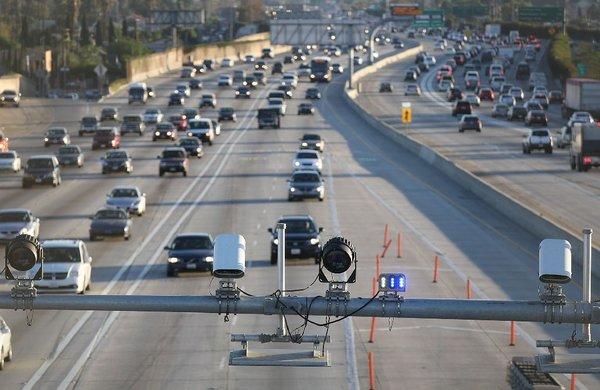 Cameras and electronic sensors stand over the express lane south of the Slauson Avenue transit station on the 110 Freeway.

Rush-hour traffic in the new 110 Freeway toll lanes are moving faster, but traffic in other lanes has slowed slightly, according to the first report on the project.

The Metro and Caltrans data is the first evaluation of the county's initial attempt at "congestion pricing"— charging solo drivers to use the carpool lane to reduce backups. The high-occupancy or "HOT" lanes run from the Harbor Gateway Transit Center at 182nd Street to Adams Boulevard.
Transit officials have sold more than 105,000 transponders—the devices drivers need to use the HOT lanes. Tolls have brought in $3.2 million in revenue as of Feb. 28.

Average speeds in the northbound express lanes have increased 10 mph to an average of 45 mph between 7 and 8 a.m., the report said. To keep $210 million in grant money provided for the project by the U.S. Department of Transportation, Los Angeles must show that cars can travel 45 mph at least 90% of the time during rush hour.

Non-toll lane traffic in the most congested segment of the northbound 110 slowed by more than 8 mph during morning rush hour, the report said. At the most congested point in non-toll southbound lanes, traffic slowed 3.6 mph on average.

The number of cars taking the 110 Freeway has dropped slightly since the toll lanes opened, to about 96% of the volume measured in November, the report said.

Between Nov. 10 and Feb. 28, the California Highway Patrol cited 307 drivers and warned 412 more for not paying tolls or not having a transponder.

Metro and Caltrans will periodically evaluate the toll lanes, and next year an independent group will assess the experiment's performance.
Newer Post Older Post Home