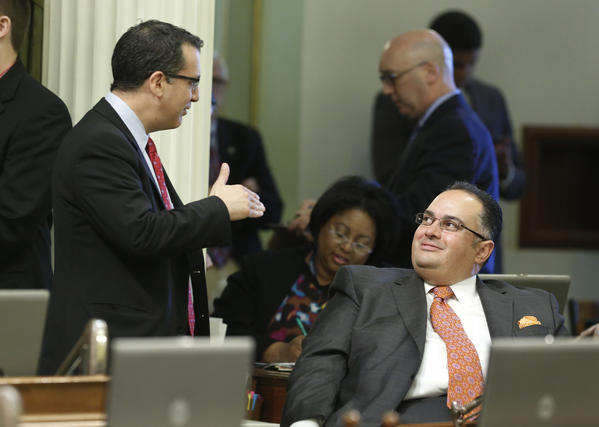 Assemblyman Bob Blumenfield (D-Woodland Hills), left, speaks with Assembly Speaker John A. Perez (D-Los Angeles) at the Capitol in May. Blumenfield is proposing a constitutional amendment that would make it easier for cities and counties to raise property taxes or issue bonds.

SACRAMENTO -- The budget won't be the only big issue being considered by the Assembly on Friday.

Democrats have scheduled a vote on a controversial constitutional amendment that would make it easier for cities and counties to raise property taxes or issue bonds to pay for infrastructure improvements.

Under the amendment, bond issue proposals would need only 55% of the vote to pass, rather than the current two-thirds. The same reduced threshold would apply to votes on raising property taxes to cover the cost of the borrowing.

The Howard Jarvis Taxpayers Assn. said the decision to hold a vote on the measure on the same day as the budget was a "sneak attack on property owners" and Proposition 13, the 1978 constitutional amendment limiting property taxes.

The measure's author, Assemblyman Bob Blumenfield (D-Woodland Hills), noted that school districts can already pass bonds with 55% of the vote. He said in a statement that his amendment would provide cities "with new tools to invest in their prosperity."

He added, "California is in an untenable position that jeopardizes our economy, jobs and way of life. Most of our infrastructure was designed and built over 40 years ago to accommodate a much smaller population."

The amendment is, in part, a response to the failure of Measure J, a Los Angeles tax initiative that fell barely short of the two-thirds vote needed to pass.

If Blumenfield's amendment is approved by the Assembly, it could still face opposition in the upper house. Senate leader Darrell Steinberg (D-Sacramento) has said lawmakers should hold off on tinkering with local tax laws until at least next year.

The amendment would also need to be approved by California voters, and could wind up on the next June primary ballot unless lawmakers schedule it differently.
Newer Post Older Post Home