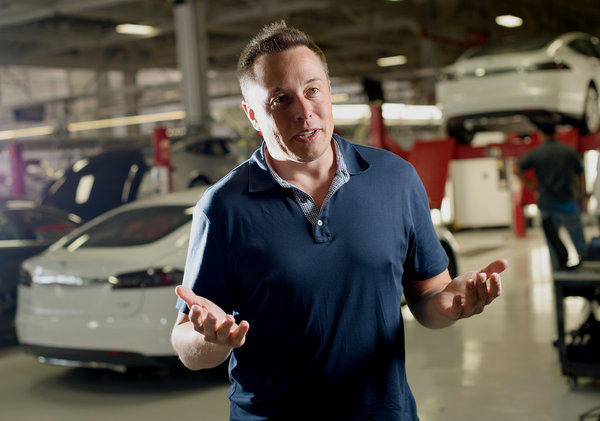 Never one to think small, tech mogul Elon Musk -- founder of Tesla Motors and Space X -- says he's working on a "fifth mode" of transportation that can zip you from Los Angeles to San Francisco in half an hour.

"Will publish Hyperloop alpha design by Aug 12. Critical feedback for improvements would be much appreciated," Musk said in a tweet, which he prefers to the news release or the interview. A Tesla spokeswoman said Musk would have no further comment.

The Hyperloop, Musk has said previously and cryptically, would resemble a "cross between a Concorde and a railgun and an air hockey table."  He’s also said it would be immune to both crashes and inclement weather conditions, suggesting it would be fully enclosed.

But Musk clarified it won’t be the same as a vacuum tunnel, an as-of-yet unconstructed idea for high-speed rail that sucks the air out of tunnels so that trains can move rapidly using little power.

PHOTOS: 10 cheapest cars that get 35 mpg or better

Musk first mentioned the Hyperloop during a “fireside chat” in July 2012. At the time, he estimated it would cost around $6 billion. For comparison, Phase 1 of the proposed California high-speed rail system will cost an estimated $68 billion to connect San Francisco to Los Angeles through the Central Valley and Palmdale, according to an April 2012 report by the rail authority.

Though Musk’s announcements are generally met with plenty of fanfare, it remains to be seen how receptive California’s transportation authorities will be to Musk's latest big idea.

But it would be a mistake to dismiss Musk's seeming far-fetched notion, said Rod Diridon, executive director of Mineta Transportation Institute at San Jose State University. “Mr. Musk has a reputation for state-of-the-art problem-solving, most clearly shown with the Tesla,” Diridon said. “We look forward to helping mature his concept to a practical application as quickly as possible.”

That might not be fast enough for California. Diridon detailed the lengthy process a transit solution this extensive would have to navigate, from land-use approval, funding, development to construction. “The problem is that this can’t be built within the time frame the state needs in order to meet the huge influx in population over the next 25 years,” he said.

Diridon spoke highly of Musk, and said he plans to buy a Tesla Model S when the lease on his electric Nissan Leaf is up.

“It’s a good thing, and we need to have it as the next move beyond high speed rail. But if we try to use it instead, we’re going to have nothing in the middle of a population influx like no state has seen in the past,” he said. “I’m not critical -- I’m practical.”

Andy Kunz, chief executive of the U.S. High Speed Rail Assn., said he was keeping an open mind.
“I’m not sure what he’s going to come up with,” Kunz said, noting his organization has seen plenty of high-tech high-speed rail variations come out of the woodwork over the last several years. “These proposals look good on a website, but you gotta get out and build some test tracks.… [Musk] is a smart guy. Maybe he’s putting together something brilliant.”

But, Kunz said, that shouldn’t stop progress on the U.S. development of high-speed rail systems, which have already been successful in countries such as France and China. “It’s off-the-shelf technology, ready to go, proven," he said. "We’re promoting what we can build today. We need this now. We don’t want [Hyperloop] to be a distraction.”
Newer Post Older Post Home