California Supreme Court says the environmental review complies with the law. The ruling is a loss for homeowners associations fighting the project. 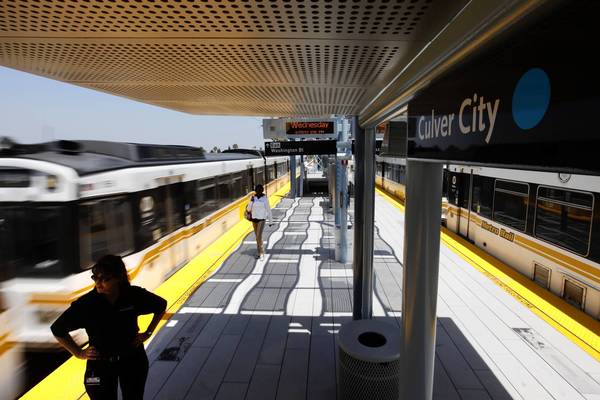 The Culver City Expo Line station, above, opened in 2012. The extension from Culver City to Santa Monica is scheduled to start operating in 2015.

SAN FRANCISCO — The California Supreme Court refused Monday to hold up extension of the Expo Line to Santa Monica for further review.

The state high court's fractured decision was a loss for a group of homeowners associations that had argued the project's environmental impact report failed to comply with state law.

The Exposition Metro Line Construction Authority approved the rail line from Culver City to Santa Monica even though the review of traffic and air-quality effects relied on a base line of conditions in the year 2030. The Expo Line segment to Santa Monica is scheduled to start operating in 2015.
A group called Neighbors for Smart Rail, supported by homeowners' groups, challenged the environmental impact report in court.

Four of the Supreme Court's seven members said environmental reviews generally should include analysis of a project's immediate effect, but only one justice was willing to reject the report.
In the lead opinion, written by Justice Kathryn Mickle Werdegar and signed by two justices, the court found that agencies generally should do an analysis of a project's effect on existing conditions.

But Werdegar wrote that the report's omission was not significant enough to reject the review because an analysis of traffic and air impacts in the transit line's early years of operation would not have produced "substantially different" information.

Justice Goodwin Liu agreed with Werdegar's opinion but said he would have ruled for the challengers because of the report's failure to assess immediate effects.

"Without knowing how significant this transient impact on traffic congestion might be, how are the public and decision-makers to decide whether the short-term pain is worth the long-term gain promised by the light-rail project?" Liu asked.

Three of the court's seven justices argued in a separate opinion that the rail line's environmental analysis complied fully with the law.