Concrete flyover in San Bernardino County was constructed to speed up cargo and lessen diesel emissions from waiting trains. The project came in under budget and ahead of schedule. 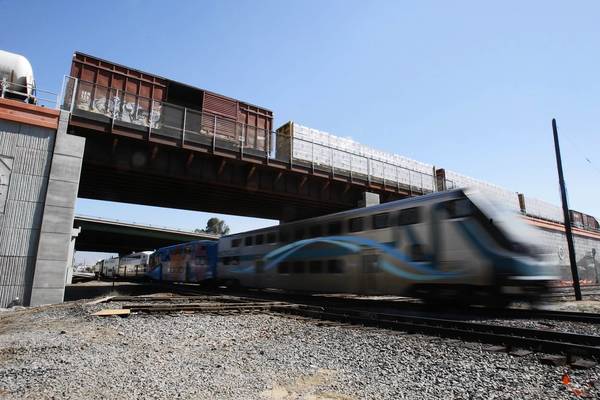 One of the worst railway chokepoints in the nation was eliminated Wednesday with the opening of a $93-million overpass that separated two busy tracks at historic Colton Crossing in San Bernardino County.

Under a hot morning sun, federal, state and local officials cut the ribbon for the 1.4-mile concrete flyover designed to speed cargo through Southern California and stop harmful diesel emissions from trains that used to wait up to four hours for their turn to go through the old street-level crossing.

"Nov. 8, 2011, was the groundbreaking," said Raymond W. Wolfe, executive director of the San Bernardino Assn. of Governments. "Two short years later, we are now celebrating a new era in railroading. It's truly an engineering feat for those who build infrastructure."

Originally estimated to cost $202 million, the project was completed well under budget and eight months ahead of schedule. Officials attributed the cost and time savings to innovative construction techniques, cooperation among government agencies and a competitive market that produced bids that were lower than expected.

The 43-foot-high span replaces Colton Crossing, built in 1883. It is about 57 miles east of Los Angeles. Over the years, the crossing for what became the main tracks of the Union Pacific Railroad and the Burlington Northern Santa Fe Railway Co. remained largely unchanged, except for modern track and signals.

Located off Interstate 10 near Rancho Avenue, the old crossing saw Burlington Northern's north-south tracks intersect Union Pacific's east-west tracks at right angles, forcing trains to proceed one at a time. More than 100 trains use the tracks daily, including those of the Metrolink commuter service, which shares the Union Pacific route.

Because Burlington Northern controlled the crossing for years and gave its trains priority, Union Pacific suffered the vast majority of delays, with many of its trains halted just short of West Colton Yard, one of the Union's Pacific's largest freight facilities.

Robert Kern, a veteran Union Pacific engineer who is now a senior operations manager, recalled that he could make a run from Yuma, Ariz., to Colton — about 200 miles — in seven or eight hours only to be stopped at the crossing for one to two more hours before he could proceed into nearby Colton yard. Occasionally, he said, the delay lasted four hours.

"You can't imagine how disheartening that was," Kern said. "This project will be a godsend."

Regional transportation planners say the chronic delays in rail shipments made the Colton flyover a priority for goods movement in Southern California, especially for the ports of Los Angeles and Long Beach, the largest combined harbor in the United States.

Almost half of all U.S. imports shipped in cargo containers flow through Los Angeles and Long Beach before they travel by truck and train to other parts of the country. If trends continue, the amount of containerized cargo handled by both ports is projected to increase from 5% to 6.6% annually until 2020.

The flyover project is a public-private partnership involving Caltrans, the San Bernardino Assn. of Governments, the city of Colton, Union Pacific and Burlington Northern. Funding came from the railroads as well as state and federal sources, including the American Recovery and Reinvestment Act and Proposition 1B, which provides money for goods-movement projects in California.
Newer Post Older Post Home