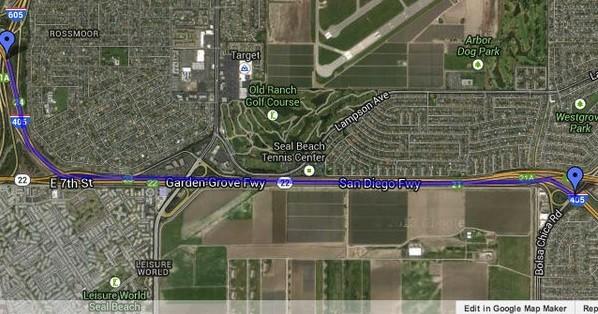 It happened in Los Angeles -- twice -- and now Orange County can brace for its own 'Carmageddon': the 405 Freeway will be closed in both directions for 20 hours.

The closure is scheduled to begin at 9 p.m. on Saturday, Aug. 17, and last through 5 p.m. on Sunday, Aug. 18. The freeway will be shut down between the 605 Freeway and Valley View Street in Westminster, according to a news release from the Orange County Transportation Authority.

"We know this 'Bridge Bash' has the potential to disrupt traffic for the hundreds of thousands of people who use the I-405 on a typical summer weekend and we are encouraging drivers to avoid the freeway in this area," Greg Winterbottom, OCTA chairman, said in the release.

Officials said the closure is needed to demolish a bridge that links the southbound 405 to the eastbound 22 Freeway as part of a larger $277-million traffic improvement project.