A cyclist asks: What are the rules of the road? 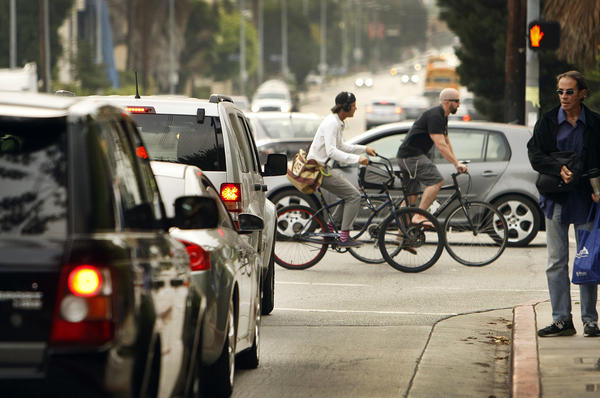 Cyclists at the intersection of Bundy Drive and Idaho Avenue in West Los Angeles.


When I ride each weekend from my house to Griffith Park, I tend to ride, like most bicyclists, on the right side of the street, next to the parked cars, allowing traffic to pass me on the left. But is that really what I’m supposed to do, or am I supposed to ride in the middle of the lane, with cars behind me and in front of me? And if I want to make a left turn, how am I supposed to get from the right lane to the left-turn lane -- at what speed and where am I supposed to cross the rest of the traffic? Sometimes I find that it’s safer and easier to ride on the sidewalk, where there are no dangerous moving cars and, to be honest, no pedestrians either. But is that legal?

I’m not a brand-new bicyclist in Los Angeles. I’ve been riding through the city for at least three years. But I do so by adhering to a code of my own, made up for the most part in my own head on the basis of common sense, experience and fear. There is no DMV for bicyclists, there is no official manual given out to every new rider that explains the rules, and there is no test to make sure you’ve learned those rules.

Yet the rules exist. It doesn’t take much work to find at least some of them online. I should have done it sooner. For instance, the California Vehicle Code makes it clear that if you’re riding a bike at the speed of traffic, you may ride in the middle of the lane, but if you’re riding more slowly, you should ride as close as practicable to the right-hand curb (except under certain circumstances, such as when passing another bicycle or preparing to turn left). That’s pretty much what I do.

Under city law, it is legal to ride on the sidewalks of Los Angeles as long as one does not do it with “willful or wanton disregard” of life and property. I don’t ride willfully or wantonly, so I think I’m OK. If I run into a police officer, I hope he or she agrees.

And for those who are interested in what laws ought to be passed or changed, a bunch of suggestions -- some more controversial than others -- are posted at the blog BikingInLA.

It turns out that my common sense was pretty good, and by and large I got it right. But I wish the rules were easier to find and that everyone on a bike knew them. I see too many people going through stop signs, which I am quite sure is not legal. I see (and share) great confusion about the rights of bike riders in bike lanes, including how drivers are supposed to behave when they have to cross bike lanes. Clarity for all would go a long way toward reducing the number of accidents in Los Angeles.
Newer Post Older Post Home