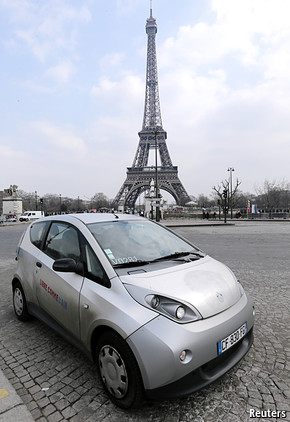 
GROUPE BOLLORÉ is one of those family-owned European firms that seem to have jumped like mountain goats from foothold to industrial foothold down the decades. For more than a century it specialised in making paper, before branching out into plastic films for condensers and then advanced batteries. Now it is taking the electric-car market by stealth, if not yet by storm.

On September 12th Bolloré and Renault said they would collaborate in the field of electric vehicles. The idea is to extend urban car-sharing schemes and perhaps to produce Bolloré’s existing electric Bluecar at Renault’s factory in Dieppe, as well as a new, smaller version. The French carmaker claims about half of the meagre European market for electric cars but competition is hotting up, with big rivals such as BMW and Volkswagen piling in. Arnaud Montebourg, France’s minister for industrial recovery, welcomed the accord as just the sort of French-French partnership that is needed to restore his country’s fading economy to global greatness.
Bolloré is not yet as big a star as Tesla, a ten-year-old Californian maker of high-end electric cars led by Elon Musk, a serial entrepreneur. Boosted by the success of its glamorous Model S car, Tesla declared its first profit earlier this year, and now has a stockmarket value several times that of PSA (Peugeot-Citroën). Instead Bolloré, a big, diversified company nearly two centuries old, has been beavering away in a less flashy bit of the market: the management and storage of energy.

The company believes its lithium-metal-polymer batteries are more powerful and more resistant to external temperatures than the lithium-ion ones in common use. In 2007 it went into business with Pininfarina, a designer and manufacturer, to produce battery-powered Bluecars in Italy. Almost all of them have been deployed in Autolib, a successful electric-car-sharing scheme launched by Bolloré and the Paris authorities in December 2011. Similar schemes will start in October in Lyon and by year-end in Bordeaux. Indianapolis in America is due to take 500 Bluecars in 2014.

Vincent Bolloré, the group’s boss, likes to describe himself as a “stubborn Breton”, and Bolloré has yet to make money on its big battery bet. It has spent at least €1.7 billion ($2.3 billion) on battery-related development over the past decade or so, and will spend more expanding capacity at new plants in Brittany and in Canada. In October Bolloré plans to float 10% of “Blue Solutions”, which groups its various battery activities other than Autolib itself, on NYSE Euronext—not so much to raise capital, says Mr Bolloré, as to expose the division to the marketplace. New sources of financing are nonetheless likely to emerge.

The deal with Renault may allow Bolloré to increase its production of Bluecars at a time when Autolib-style schemes are growing fast. It is clear that one of Bolloré’s big attractions for Renault is its mastery of car-sharing, right down to running recharging-point networks and tracking electronically the whereabouts of the vehicles. But it is unclear if Renault will use Bolloré’s batteries in its own line-up, instead of, or in addition to, those currently supplied by LG, a South Korean firm, and Renault’s Japanese partner, Nissan.

Renault is careful to make clear that the relationship is at an early stage. The French carmaker also has a chequered reputation where visionary battery partners are concerned. It once agreed to collaborate with Better Place, an Israeli firm developing a swappable-battery approach; in May Better Place declared bankruptcy, apparently unmourned and certainly unrescued by Renault. However, Bolloré may be made of sterner stuff.

The broader question is where electric cars, notoriously slow to gain adherents, are heading. Sales in the first half of 2013 were up in most rich countries. The European Commission has recently proposed common standards for recharging plugs, which would help. And regulations forcing manufacturers to reduce carbon-dioxide emissions are encouraging them to take the electric option seriously.

But carmakers are also cleaning up internal-combustion engines and producing more small, low-consumption conventional cars, notes Daniel Schwarz, a motor-industry analyst at Commerzbank. Electrics and hybrids account for a tiny fraction of car sales; Mr Musk’s prediction that they will make up half before long raises eyebrows even among his fans. Electric cars may make most sense in cities where noise and pollution are big concerns and recharging networks can be dense. Small wonder that urban electric-car-sharing schemes like Bolloré’s are taking off.
Newer Post Older Post Home