And Now, Here Is The Sunday News 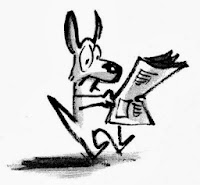 Mod: We have had so much success with our Saturday posted "Weekend News" concept that we decided it would be best to return this feature back to its less popular Sunday slot. I know this might seem counterintuitive to some, but there is a reason for it. However, I'd rather not discuss that with you right now. It's not that the matter is particularly sensitive, or that there are any big secrets involved. It is just that I don't see why I need to tell you everything. One other matter while I have you. Most of the news we've posted here today is not particularly good. Why that is I do not know. I would have hoped things would have been better, but sometimes they just don't seem to turn out that way. This clearly is not my fault. Here is the Sunday News.

Homeless used to buy iPhones in Pasadena left stranded, unpaid (The Los Angeles Times link): Dozens of people picked up on skid row by an enterprising man hoping to secure a load of new iPhones said they were left unpaid and stranded at the Pasadena Apple store.

Dominoe Moody, 43, said he was taken to Pasadena from a downtown Los Angeles homeless mission with several van-loads of people to wait in line overnight for the latest iPhone. He was promised $40, but said he wasn’t paid because after handing the man the iPhone, the man was taken away by police when people became upset with him.

“It didn’t go right. I stood out here all night,” he said, adding that he has no way to get home.

Pasadena Police Lt. Jason Clawson confirmed that a fight broke out about 9 a.m. as a man left the store with multiple iPhones. Other people who were in line and hired by the man began fighting with him because they said they weren’t being paid enough, Clawson said. Police escorted the man from the scene, he said.

Most people weren’t paid by the man, Moody said, estimating that 70 to 80 were recruited and driven to the store to wait in line.

“They need to bring him back ... to pick up the people that he brought here,” said Vivian Fields, 49. “We have no way to get home.”

Fields, who is in a wheelchair, said she was approached by recruiters at a homeless shelter on skid row and arrived in Pasadena on Thursday about 7 p.m. She waited overnight at the store.

Pasadena police are not investigating the incident, Clawson said. "It's not a police issue. It's a business issue," he said.

(Mod: I stood in a long line once at the Pasadena Apple store to get an iPhone, but unlike these people I got to kept it. I hope they at least got to visit the Cheesecake Factory.)

No peaceful, easy feeling after N. Chas. woman accused of stabbing roommate (The Post & Courier link): A North Charleston woman is accused of wielding a knife in an assault on her roommate after he refused to stop listening to rock music by the Eagles Monday night. Vernett Bader, 54, of Brossy Circle, is charged with criminal domestic violence of a high and aggravated nature.

The woman's 64-year-old roommate was nursing stab wounds to his arm, hand and elbow, police said. The wounded man told police that Bader grew angry with him while he was listening to the Eagles and watching television with his brother.

Bader told her roommate she didn't want to listen to the band. He responded by telling her to shut up, the report states.

Bader grabbed a serrated knife from a kitchen drawer and swung it at the man, police said. When the two men wrestled the knife away from Bader, she went back into the kitchen and found another, the report states.

(Mod: The Eagles? No jury will convict her.)

A Green Car Named Desire - Electric car subsidies for the rich are now a drain on California's budget (The Wall Street Journal link): California's green regulations often drive national policies, so it's worth pointing out how its programs to cut vehicle emissions have become a gravy train for the 1%. You'll enjoy this if you live in the other 49 states.

To meet the state's goal of cutting its greenhouse emissions to 80% below 1990 levels, effectively all new cars sold in California by 2040 will have to be electric or plug-in hybrids. As a regulatory weigh station, Governor Jerry Brown has ordered that 1.5 million zero-emission vehicles "be on California roads" by 2025. That last bit is the immediate rub.

Car makers are compelled by the California Air Resources Board to increase their electric fleets to meet these mandates. However, the battery-powered cars have been duds with most consumers. So the board has graciously allowed manufacturers to comply with its diktats by buying "credits." Palo Alto-based electric car maker Tesla has made a $119.5 million killing (300% of its net income) this year from hawking its excess credits.

To get more electric cars on the road, the state also offers consumers $2,500 rebates financed by a $20 "smog abatement fee," which all drivers in the state must pay for their first six registration years. The rebate is on top of the $7,500 federal tax credit and $1,000 or more the state pays drivers to retire their gas guzzlers. The combined government incentives can reduce the price of a Nissan electric Leaf to about $18,000.

(Mod: Speaking of counterintuitive, we just bought a Chevy Spark EV. Which, in its country of origin, is called a Daewoo Matiz. And yes, we got a $7,500 tax credit from Uncle Sugar, plus we expect to receive a $2,500 check from Jerry Brown in the next couple of weeks. It really is a great car, and we love it. No gas stations, no oil changes, no smog tests, no tune ups, plus significantly more driving range than that absurd Nissan thing. Plus the government practically paid us to take it, so why not? Powered by coal generated electricity. It is hardly my fault they're crazy.)

Coca-Cola Apologizes for Offensive Bottle Cap (Good Morning America via Yahoo link): Pardon their French? Coca-Cola recently issued an apology to a family after one member purchased a Vitaminwater with a bottle cap bearing an offensive message.

Blake Loates of Edmonton in Alberta, Canada told Metro Calgary she was shocked when she opened her beverage and read the words "YOU RETARD," written inside of the cap. The language was particularly painful to her and her family as one of Loates' younger sisters, Fiona, 11, has cerebral palsy and autism.

The cap inspired Loates' father, who lives in Tacoma, Wash., to issue a lengthy letter of complaint to Vitaminwater's parent company Coca-Cola.

"What would you do if you opened up your bottle of Vitamin Water and on the bottom of the lid it read, "YOU RETARD"?" Doug Loates wrote in his letter swearing off the beverage company for life. "Think about it. I bet you'd be pissed off if you had a Fiona in your life… Can you imagine if SHE had opened this bottle?"

The Loates family did not immediately respond to ABC News' requests for comment.

Representatives for Coca-Cola have since stated that the language inside of the cap was the product of a competition pairing one random English word with a second random French word. In French, "retard" means "late" or "delayed." The word's English connotation was missed during the review process, said a spokesperson.

(Mod: There you go, blame the French guy.)

US nearly detonated atomic bomb over North Carolina – secret document (The Guardian link): A secret document, published in declassified form for the first time by the Guardian today, reveals that the US Air Force came dramatically close to detonating an atom bomb over North Carolina that would have been 260 times more powerful than the device that devastated Hiroshima.

The document, obtained by the investigative journalist Eric Schlosser under the Freedom of Information Act, gives the first conclusive evidence that the US was narrowly spared a disaster of monumental proportions when two Mark 39 hydrogen bombs were accidentally dropped over Goldsboro, North Carolina on 23 January 1961. The bombs fell to earth after a B-52 bomber broke up in mid-air, and one of the devices behaved precisely as a nuclear weapon was designed to behave in warfare: its parachute opened, its trigger mechanisms engaged, and only one low-voltage switch prevented untold carnage.

Each bomb carried a payload of 4 megatons – the equivalent of 4 million tons of TNT explosive. Had the device detonated, lethal fallout could have been deposited over Washington, Baltimore, Philadelphia and as far north as New York city – putting millions of lives at risk.

(Mod: That certainly would have taken care of the problem they have in North Carolina with people listening to The Eagles.)

DWP says it can't track millions in ratepayer money (The Los Angeles Times link): The Los Angeles Department of Water and Power has directed an estimated $40 million in ratepayer money to two nonprofit groups charged with improving relations with the utility's largest employee union, but the agency claims to have scant information on how the public funds have been spent.

The Joint Training Institute and the Joint Safety Institute, controlled by DWP managers and union leaders, have received up to $4 million per year since their creation more than a decade ago after a contentious round of job cutbacks at one of the nation's largest municipal utilities.

Nearly all of the nonprofits' money comes from DWP ratepayers, records show. About $1 million per year has been used to pay the salaries of a handful of administrators, according to the limited records the utility has provided to The Times under the California Public Records Act. Separate federal tax records offer only summaries of the organizations' outlays, including more than $360,000 spent on travel from 2009 to 2011.

Officials at the nonprofits, the DWP and the employees' union, Local 18 of the International Brotherhood of Electrical Workers, declined to be interviewed about the institutes' activities and spending.

(Mod: Maybe it went out with the recycling. Did they check in the blue can?)

Now federal authorities are, too – and they say it was Johnson’s new bride who allegedly pushed him over a cliff, and to his death, during an argument on July 7.

Johnson’s widow, 22-year-old Jordan Linn Graham of Kalispell, was taken into custody in Kalispell Monday morning and made an initial appearance in U.S. District Court in Missoula Monday afternoon on a complaint alleging second-degree murder.

The couple had been married for eight days when Johnson was killed, according to Johnson family friend Tracey Maness.

“Nobody is shocked at all” that Graham is suspected in her husband’s murder, according to Maness. “She’d been telling people she knew she never wanted to be married, she just wanted to have a wedding, and that’s apparently what they were arguing about.”

According to an affidavit in support of the complaint, Graham allegedly confessed to the killing to FBI special agent Steven Liss in mid-July. Graham had initially told law enforcement her husband had gotten into a dark car with Washington plates on July 7 and never returned home.

Johnson’s body was located on July 12 below The Loop, a switchback and parking area on Glacier’s famous Going-to-the-Sun Road.

(Mod: At least it wasn't because he refused to wash the dishes.)