Resident asks for more details on the proposed upgrades to 83-year-old facility. 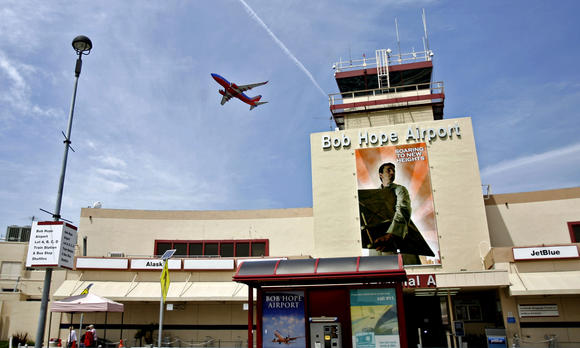 A Southwest Airlines plane takes off as the airline celebrates its 20th anniversary at Bob Hope Airport in Burbank on April 15, 2010. Burbank-Glendale-Pasadena Airport Authority revealed their plan for a new 14-gate terminal this week.


The Burbank-Glendale-Pasadena Airport Authority revealed its plan for a new 14-gate terminal this week.

In a pair of meetings held Monday morning and evening, airport officials presented their vision for a new, larger terminal, meant to replace the airport’s current 83-year-old building.

“We are being totally transparent with you saying it’s going to be a bigger building,” Authority Commissioner Susan Georgino told attendees at the Monday night meeting.

Airport officials say a new terminal is needed because the current building is too close to the runways — 250 feet instead of the required 750 feet — to meet Federal Aviation Administration safety standards.

The proposed terminal would keep the same number of gates, but would lose the “L” shape of the current building in favor of a symmetrically configured rectangularly shaped terminal.

Due to provisions in Measure B, which was approved by Burbank voters in 2000, finalized plans for a new terminal must be approved by residents at the polls.

Burbank resident Mike Nolan said at the Monday evening meeting he thought the Airport Authority should have presented more details on the exact size and location of the proposed terminal.

“I’m disappointed that you’re having this meeting now and we can’t get definitive answers,” he said. “People want to know where new terminal is going to be, what’s the footprint.”

Airport Executive Director Dan Feger said that more details will be presented at the next study session on the new terminal, to be held on Sept. 26, and will be made plain before the airport starts its environmental review process.

The environmental review is slated to begin at the end of the year, and to be completed in early 2015.
Nolan said the authority needs to provide specific information on the new terminal if it wants to succeed.

“If you listen to my concerns you will work to get credibility from the public, which will be essential for you to pull this off,” he said.

More information: In addition to the September 26 meeting, to held at the Burbank Marriott at 5:30 p.m, the Burbank City Council will host a town hall meeting about the project at Burbank Middle School on October 1 at 7 p.m.

To learn more about the meetings or to submit a question or comment about the process, visit the airport’s website, www.burbankairport.com, and select the link “The Future of the Airport: Ground Transportation and Land Use Study.”

LAX and beleaguered LA/Ontario have been hogging all the airport headlines for a while now, but Burbank's Bob Hope Airport is now trying to horn in on the action. Last week, officials presented rough plans for a brand new, two-story, 14-gate terminal to replace the 83-year-old L-shaped building they're currently using. While the proposal wouldn't add any gates, it calls for a larger building that would have space for more shops and restaurants, larger passenger waiting areas, better accessibility, and room for more large planes. The old terminal building would be demolished to extend the runway taxi area. Exactly how much larger the new building will be is still unknown--and was a source of some consternation at last week's meeting, according to the Burbank Leader. There are more public meetings on the future of the airport planned in advance of an environmental review, which will kick off early next year but won't be completed until 2015. Once finalized, the plans will go to Burbank voters for approval. Funding for the project would come from the airlines, FAA, airport authority, and passengers.