California getting more of its oil by rail


The oil boom in North Dakota has fueled a shift for California away from in-state, Alaskan and foreign sources. The move comes at a time of heightened scrutiny of oil shipped by train. 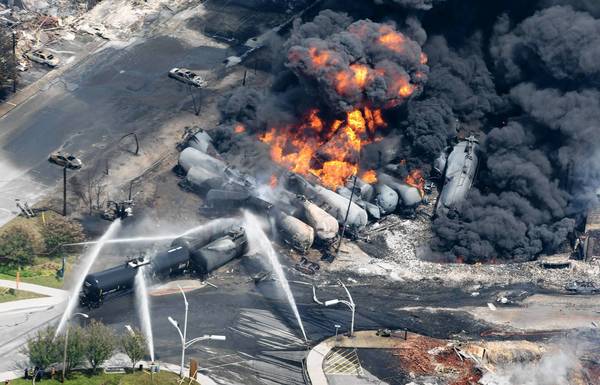 The July oil train disaster in Lac-Megantic, Quebec, in Canada has fueled heightened scrutiny in the U.S. of transporting crude by rail.


Oil extracted from massive new fields in North Dakota and other states is rolling into California in growing quantities aboard long-haul freight trains, paralleling a surge in crude moving on rail across North America.

More than 200,000 barrels of crude per month were imported into California this summer, a fourfold increase from early 2012, according to data compiled by the California Energy Commission. Though the total amount is still small, it marks a little-noticed departure from the state's reliance on its own declining oil patches, the Alaskan North Slope and foreign nations, led by Saudi Arabia.

But the use of rail to move oil amid rapidly expanding U.S. production is coming under growing regulatory scrutiny after the horrific explosion of an oil train in Canada's Lac-Megantic, Quebec, killed at least 42 residents in July. An unattended train with 72 tank cars hauling crude from North Dakota's Bakken Shale fields rolled downhill into the city and ignited an inferno that destroyed half of downtown.

Canadian investigators and U.S. oil experts have identified a number of grievous safety lapses tied to the accident. In its aftermath, the Federal Railroad Administration issued an emergency order that requires new safety procedures for hauling crude. And the Pipeline and Hazardous Materials Safety Administration said it may demand more puncture-resistant tank cars.

Hauling crude into California involves traversing some of the most challenging mountain passes in the nation. And though runaway freight trains are rare events, they have the potential to cause big damage. A 31-car train rolled downhill for about 30 miles in 2003, crashing in Commerce with a load of lumber that damaged property and injured a dozen people. If it had been highly volatile Bakken crude, which can burn like gasoline, the damage would have been far greater.

The rise in rail shipments in part reflects successful opposition to new pipelines to accommodate U.S. oil production, which has jumped 41% since 2006. Environmentalists have fought the construction of new pipelines, such as the Keystone XL that would link Canadian and North Dakota production fields to refineries in Texas. Railroads, meanwhile, are carrying 25 times more crude than they were five years ago.

Though railroads have sharply improved their safety in recent years, moving oil on tank cars is still only about half as safe as in pipelines, according to Eric Smith, associate director of the Tulane University Energy Institute.

"You can make the argument that the pipeline fights have forced the industry to revert to rail that is less safe," Smith said.

The shift to rail is not entirely the result of the inability to build pipelines, however. Refiners increasingly like the flexibility of buying crude even when there isn't a pipeline to carry it.
Tesoro and Valero Energy, both based in Texas, say they plan to start or increase their use of crude brought in by rail at their California refineries. Valero is seeking a permit to build a new rail terminal at its Bay Area refinery. Some North Dakota crude is also being shipped aboard barges down the West Coast to California, after arriving on rail in Seattle. Phillips 66, which owns refineries in Northern and Southern California, said it had received barged shipments of Bakken crude.

"Right now, North American crudes are the lowest cost and highest quality anywhere in the world," said Valero spokesman Bill Day. "California is at a disadvantage because it doesn't have pipelines that can bring in crude from North Dakota or Texas."

It is widely expected that a large new rail terminal somewhere in the Central Valley will be built to tie into California's pipeline network, which mainly serves the state's own crude oil industry, according to Philip Verleger, an oil industry consultant.

The import of shale oil from North Dakota, Colorado and other states is something of a teaser for the California oil industry, which is focused on its massive resource, the Monterey Shale. The vast formation under the Central Valley contains an estimated 15 billon barrels of oil, three to four times larger than North Dakota's Bakken field.

Though California still ranks as the third-largest oil producing state, its output is only half as much as it was two decades ago. Exploiting the deposits by hydraulic fracturing, known as fracking, would face sharp opposition by environmental groups, and recently enacted state legislation on the practice could throw a chill on its development when new regulations are implemented in two years.

"We have the opportunity to develop oil domestically and we should avail ourselves of it," said Western States Petroleum Assn. spokesman Tupper Hull. The group says that development of the Monterey field would create up to 2.8 million jobs and add $222 billion to the state economy. Hull said tapping California's oil makes more sense for public safety and the environment than importing out-of-state oil by rail.

In the Pacific Northwest, where as many as 11 refineries are planning oil-by-rail shipments, hundreds of protesters gathered near the Washington-Oregon border in August to protest the plan. A new terminal to transfer rail oil to ships on the Columbia River would threaten schools and a newly developed waterfront in the event of an accident like that in Quebec, said Trip Jennings, an organizer at the environmental group Portland Rising Tide.

"The corporations want to push the public safety aspects of this under the table," he said. "We are talking about a ticking time-bomb moving through our cities."

The shift to rail has grown over the last five years. In 2012, U.S. railroads transported 234,000 rail cars of crude, each containing about 30,000 gallons, up from 9,500 rail car loads in 2008, according to the Assn. of American Railroads. In the first and second quarters of this year, the volume doubled over similar periods in 2012.

The growth gained little attention until the Quebec accident, which occurred on the Montreal, Maine and Atlantic Railway, a short-line railroad that is privately owned. The train was parked overnight on a hill on the main line, rather than on a siding, while the engineer went to a hotel. One locomotive was left idling to provide power for the train's air brakes. At some point, a fire broke out in the locomotive and disabled the air brakes, which had not been set properly to compensate, investigators believe.

Canadian investigators also have determined that the crude was mislabeled on the cars as having a lower volatility, though it was nearly as combustible as gasoline.

"This Quebec accident ranks as one of the most incompetent industrial accidents I have ever heard of," said Verleger, the oil industry consultant.

The Federal Railroad Administration in the U.S. issued an emergency order in early August, prohibiting railroads from leaving crude oil trains unattended without getting prior regulatory approval. It also now requires train crews to confirm with dispatchers the number of hand brakes applied to parked trains, as well as the grade, tonnage and length of the train. Railroad administration spokesman Kevin Thompson noted that rail accidents had dropped by 43% over the last decade.

Meanwhile, the Pipeline and Hazardous Material Safety Administration moved this month to begin tightening safety standards on tank cars, specifically to make them more resistant to punctures. The current rule generally requires a loaded car be able to resist impacts at up to 18 mph. Whether stronger tank cars could have prevented the devastation in Lac-Megantic is unclear, though some kind of action seems warranted, officials said.

"Now is the time to make sure safety regulations are robust enough for the increased hazmat movement on our rails, roads and in our pipelines," agency chief Cynthia Quarterman said.

Not since the early days of the oil industry, Verleger said, when John D. Rockefeller helped pioneer oil pipelines, has the transportation of crude been so much in flux.
Newer Post Older Post Home