Coalition of L.A. and Pasadena residents wants a safer and slower Avenue 64 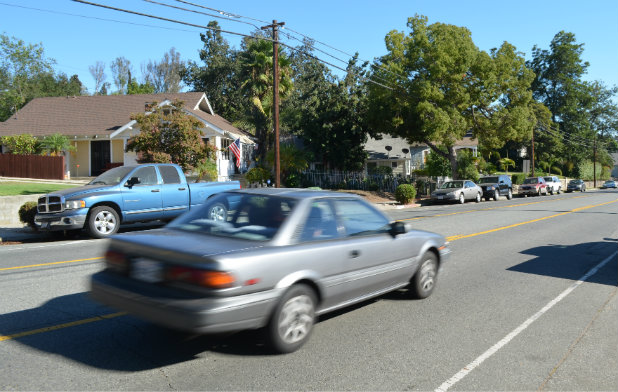 The wide roadway of Avenue 64 is a well-used commuter route through Garvanza, Highland Park and Pasadena for drivers either getting onto or coming off the 110 Freeway. The downward slope from La Loma Road in Pasadena to York Boulevard in Los Angeles naturally speeds up cars heading southbound. But, now, some residents in both cities want to slow down traffic and make Avenue 64 safer.

“I live on Avenue 64 on the Highland Park side and when we moved in, we didn’t realize how crazy the traffic was,” said Pilar Reynaldo. “At first I thought it was me, but talking to neighbors and people I have met out walking, I discover this is a problem that has been going on for 45 years. Now is the time to finally fix this for everyone in Pasadena and Highland Park.”

Reynaldo is a member of the Avenue 64 Coalition, which made a presentation last week before  the San Rafael Neighborhood Association in Pasadena to garner support for their effort to make Avenue 64 a safer street. The coalition will be making a similar presentation to the Historic Highland Park Neighborhood Council on Thursday, Sept. 19  from 6:30 pm – 8:30 pm at the Highland Park Senior Center, 6152 N. Figueroa St. 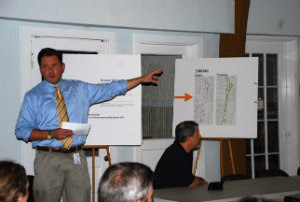 Sam Morrissey of the Avenue 64 Coalition led the evening discussion on what he and his fellow members see as problems and possible solutions regarding the roadway that bisects the boundaries of Pasadena and Los Angeles.

A traffic engineer for the City of Santa Monica, Morrissey worked with the coalition earlier this year to draft a presentation that outlined issues and offered ways to slow down traffic and potentially save lives.

“In 15 years, there has been six documented deaths on the street and numerous collisions at the intersection of Avenue 64 and Church Street,” he said at the San Rafael meeting, citing frequent speeding violations and unsafe vehicle maneuvers such as passing on the medians and in parking lanes.

Morrissey then described the environment of Avenue 64 which includes  homes as well as two community hubs: the Hillsides School and Church of the Angels; limited parking at both results in churchgoers and school staff and families parking on the west side of the street and walking across at Church Street – which has proven to be potentially dangerous.

The downward slope from La Loma to York and a confusing stop sign at Church Street has been a problem for years, Morrissey said. Also, the lack of pedestrian walkways – especially for the church and school – needs to be addressed.

Narrowing the road is part of the Avenue 64 Coalition’s solutions, with Morrissey offering both interim and long term versions. Some ways to narrow the street would be to repaint lane stripes, add a center, landscaped median, add more cross walks and install a round-about at Burleigh and Avenue 64. All in all, Morrissey estimated that the cost could be as high as $10 million.

Currently, the coalition has support from Pasadena councilman Steve Madison, whose area includes Avenue 64. This week, San Rafael area residents are being asked to fill out a neighborhood traffic survey as part of Pasadena’s Complete Streets Program which would give officials a better idea on what conditions exist on area streets. No such plans are in the works to survey Highland Park residents who live on Avenue 64.

Recently, Pasadena has earmarked $750,000 in grant money to implement the Avenue 64 Coalition proposal, but L.A.’s Councilman Jose Huizar “has not made any steps toward this project,” says coalition member Reynaldo.

Back in July, the coalition made a formal presentation to the Historic Highland Park Land Use Committee to get their support for the proposal. At the upcoming Sept. 19 meeting of the general neighborhood council, Reynaldo hopes to make an impression for action to council members.

“This is a street governed by both cities and one side cannot move without the other,” she said.
Newer Post Older Post Home