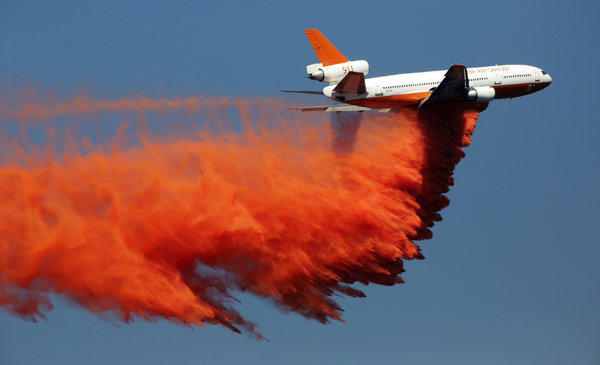 A DC-10 drops retardant Tuesday on the Madre fire in the Angeles National Forest above Azusa. A DC-10 was also used to battle the Sierra fire in the Cajon Pass.

In the Madre fire above Azusa, about 450 firefighters had the blaze 70% contained and were continuing to make headway, the U.S. Forest Service said.

The blaze broke out Monday afternoon north of California 39 in San Gabriel Canyon and briefly threatened several homes before ground crews and aircraft were able to knock down flames.

The Sierra fire in the Cajon Pass broke out Tuesday afternoon and quickly spread to 200 acres west of the 15 Freeway near Glen Helen Road, the U.S. Forest Service said.

Firefighters were dispatched to protect 20 to 30 mobile homes threatened by flames on Glen Helen Road between the 15 Freeway and Swarthout Canyon Road.

Mandatory evacuations were ordered Tuesday evening for that area, officials said. The evacuation orders would become voluntary at midnight.

The Forest Service credited an aggressive air attack in helping nearly 400 firefighters on the ground battle the blaze. The aerial assault involved five helicopters and six air tankers. The tankers included a DC-10, which drops thousands of gallons of fire retardant during bombing runs.

The fire was expected to be fully contained by Friday evening, according to the Forest Service.
Newer Post Older Post Home