Gov. Brown extends use of carpool lanes for electric cars, others 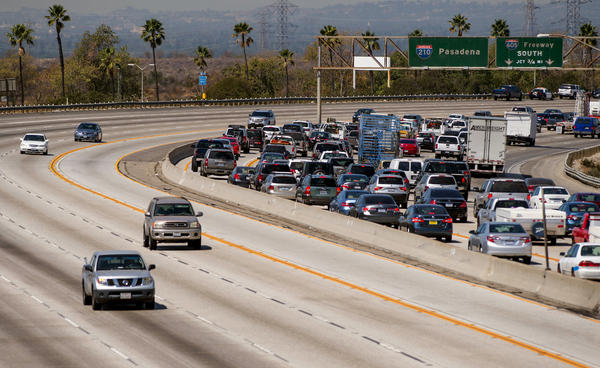 Traffic is backed up along the 210 Freeway in Irwindale after an accident earlier last month. Gov. Jerry Brown acted Saturday on a trio of bills that affect who can use the carpool lanes and when.


SACRAMENTO -- Gov. Jerry Brown on Saturday approved a four-year extension of carpool lane access for electric cars and low-emission vehicles, but vetoed a bill that would have allowed solo motorists access to those lanes on two Los Angeles County freeways during off-peak hours.

All together, the governor signed 20 pieces of legislation Saturday, including six bills promoting the use of low- and zero-emission cars.

“Today, we reaffirm our commitment in California to an electric vehicle future,” Brown said in a statement.

Under one bill approved by Brown, cars with white vehicle stickers from the state -- including electric, hydrogen fuel cell and compressed natural-gas vehicles — will be able to use carpool lanes until Jan. 1, 2019. Without Brown’s signature, the access would have expired Jan. 1, 2015. Former Assemblyman Robert Blumenfield (D-Woodland Hills) introduced AB 266.

Related bills signed by the governor make electric-vehicle charging stations more accessible to all drivers, develop new rules to include charging stations in apartment buildings and non-residential structures and provide $30 million in incentives for hybrid and zero-emission trucks and buses.

But Brown vetoed a bill by Assemblyman Mike Gatto (D-Los Angeles) that would have allowed lone motorists in regular cars to use the carpool lanes on a 13-mile stretch of the 134 Freeway in Los Angeles County during off-peak hours, the rule in much of the state.  The bill also would have allowed solo drivers to use a section of the 210 Freeway when it was not rush hour.

Brown suggested traffic in the area justifies the special rules. “Carpool lanes are especially important in Los Angeles County to reduce pollution and maximize use of freeways,” Brown wrote in his veto message. “We should retain the current 24/7 carpool lane control.”
Newer Post Older Post Home