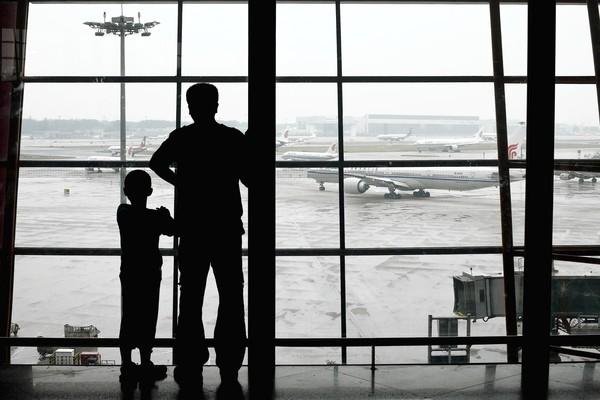 Travelers at Beijing Capital International Airport look outside at planes waiting to take off. Chinese authorities threatened to penalize airlines for excessive delays, so airlines tend to hustle passengers into planes that then pull away from the gate, making it look like the flight is on time, but don’t leave until later.


TAIYUAN, China — Air China Flight 1236 was supposed to take off at 8:10 p.m. for Beijing from Xian, hometown of China's famous terra cotta warriors.

It felt like the warriors could have marched faster. What was supposed to be a 100-minute flight last month ended up delayed, diverted and canceled to the point that it took passengers 18 hours to get to Beijing.

China's skies are in a state of almost permanent gridlock. During the month of July, only 17.8% of flights departing from Beijing's airport were on time, according to FlightStats. In August, on-time departures improved, but only to a miserable 28.8%. The U.S. website ranked Beijing worst out of 35 top international airports for punctuality, with Shanghai close behind.

The maddening delays have become a drag on the economy and the trigger for near-riots. In a nation that prides itself on social order, state media reported 26 brawls at Chinese airports between May and August. One Hong Kong airline has started teaching its flight attendants kung fu.

Flights here are delayed for pretty much the same reason highways are backed up: Explosive economic growth has produced traffic faster than infrastructure has improved.

Since 2003, the number of airline passengers in China has nearly quadrupled, to 319 million last year.
Meanwhile, airspace is limited by the People's Liberation Army, which controls most of the skies above China. In a 2011 interview with state news media, Li Jiaxiang, head of the Civil Aviation Administration of China, revealed that the military controlled 80% of the airspace. In the U.S., roughly 17% is federally controlled.

Air traffic controllers in China also err on the side of caution, the result of strict regulations imposed after a spate of accidents in the early 1990s. Flights are spaced about six to nine nautical miles apart, which means 20 to 40 planes can land on a runway every hour (as opposed to 60 in the United States).

In preparation for the 2008 Summer Olympics, China spent more than $3.5 billion building its showcase Terminal 3 at Beijing Capital International Airport. The glass-atrium vanity project, the world's second-largest airport terminal, made Beijing look rich but did nothing to alleviate the congestion in the air.

"It is like building a bigger parking lot. It didn't expand the airspace, so things only got worse," said Xu Hongjun, a professor at the Civil Aviation University of China.

Xu said it would require a decision at the highest level of the Chinese Communist Party — probably from President Xi Jinping, who is also head of the military — to prioritize civil aviation over military use.

"Airspace is a sensitive topic. You have to figure out how to divide the airspace and balance national security with economic growth, and that has to be done at the highest level of government," Xu said.

With its vast distances, mountains and gorges, China is better suited for travel by air than rail. Under a five-year plan released in 2011, China said it would invest $230 billion to construct 55 airports. A new airport, as yet unnamed but expected to be the world's largest, is planned for Beijing's Daxing neighborhood.

For the time being, more passengers have meant more delays and frustration. A new genre of cellphone video on YouTube shows airport brawls in which stools become projectiles and irate passengers smash telephones and computers.

One stormy night in July, there were three separate incidents at Shanghai Hongqiao International Airport in which passengers beat up airport staff members, some of whom suffered injuries that required hospitalization. The following weekend, 30 passengers stormed a runway in Nanchang, in Jiangxi province, after a seven-hour delay.

"The airlines are always coming up with different excuses. You never find the right person to ask, and the passengers just get angrier," said Tao Yuanyong, a Beijing travel agent.

The stock answer when passengers ask why a flight is delayed is "air traffic control," a vague phrase implying there's no clearance for an airplane to take off or land.

The crisis hit a breaking point this summer, the worst time of year for delays because of the rainy season. Stung by a flurry of bad publicity, civil aviation authorities on July 18 enacted a policy known as "unlimited takeoff," which lets planes from the busiest airports take off regardless of whether a landing strip is available. Aviation authorities have also threatened airlines with penalties and loss of routes if they incur excessive delays.

The result is that airlines tend to hustle passengers into planes that then pull away from the gate, making it look like the flight is on time. The passengers end up strapped in their seats on the tarmac waiting for a runway — or in flight, circling an airport, wasting fuel and polluting the environment.
The Air China flight from Xian last month, already delayed nearly two hours in boarding and taxiing on the tarmac, landed in Taiyuan rather than Beijing. A thunderstorm was the cause, passengers were told.

After an hour on the runway in the coal-mining capital, the flight to Beijing was canceled and passengers placed for the night in shared rooms in a guest house run by the provincial water authority.

Many, no longer trusting Air China, took a train for the remaining 300-mile journey and arrived in Beijing at 3 p.m. Those who gambled, waiting for a plane, did only slightly better, making it to Beijing at 1:30 p.m., roughly 18 hours after checking in for what was supposed to be a less-than-two-hour flight.
Newer Post Older Post Home