Is Chris Holden the Best State Assembly Majority Whip that Money Can Buy? 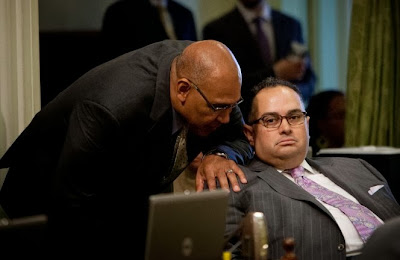 Our State Assemblyman Chris Holden will be stopping by to speak to Sierra Madre at tonight's City Council meeting. He is slated to talk about how things are going up in Sacramento, and all the many wonderful things that are being done there for us, the hardworking citizen taxpayers of California. It is being called a "State of the State" speech. And perhaps Chris will also take a moment to describe exactly how he achieved the august position of State Assembly Majority Whip mere weeks after being elected to that legislative body for the very first time last November. It would be an interesting tale to hear him tell.

But since I don't think Assemblyman Holden will have enough time to cover that particular topic this evening, I am going to discuss it for him here on The Tattler.

You would think that a legislator would need to get at least one term in the California State Assembly under his belt before assuming so senior post as State Assembly Majority Whip. As the sixth ranking power player in our de facto one party State Assembly, someone who works directly with the Speaker of the Assembly in helping to create and enact important legislation on behalf of the people of California, it really is quite a plum position.

Most folks would naturally assume that an office as powerful as that would only be given to someone with years of hard earned experience and seniority, right?

Yet Chris Holden, freshman Assemblyman from our very own 41st Assembly District, was given the prestigious and very senior position of State Assembly Majority Whip (link) only weeks after being elected to the Assembly for the very first time. And had a few other rather influential assignments thrown his way as well. Here is how the happy news is celebrated in a press release from Chris's very own official State Assembly website (link):

"I am pleased and honored to participate in these important committee assignments to improve the lives of all Californians," said Assemblymember Holden. "Many of these committees are areas in which I have some experience from my years working in the Pasadena City Council, the Burbank Airport Authority, and with Metro Gold Line. I look forward to putting that experience to work dealing with the challenges facing our district and our state."

So how did Chris manage to get all of that? The press release doesn't actually say. But according to the Center for Investigative Reporting (link), newly elected freshman Assemblyman Chris Holden could have very well paid Speaker John Perez $199,000 in specially targeted campaign donations in order to obtain his prestigious and influential positions.

It seems that this is how things get done in our vastly corrupt State Assembly.

In an article titled "California speaker gives Assembly's juiciest jobs to biggest fundraisers," here is how the Center for Investigative Reporting describes this, er, "process:"

In May 2012 and again in June, Speaker John A. Pérez wrote memos to Democrats in the California Assembly. He wanted millions in campaign cash to win a handful of key races.

At stake, Pérez wrote, was their party’s control of the Assembly – and, as it turned out, the perks and power enjoyed by the lawmakers themselves.

“It is critical that we band together to maximize our financial resources,” the burly Los Angeles legislative leader wrote in the memos, copies of which were obtained by the Center for Investigative Reporting.

Exploiting loopholes in a law enacted to stanch the flow of big money in state politics, the Assembly Democrats pumped $5.8 million into the campaigns Pérez designated, a CIR data analysis shows. The infusion of cash helped the Democrats win a supermajority in the Capitol: two-thirds control of the Legislature for the first time since 1883.

The system also paid off for the speaker’s biggest fundraisers in the Assembly.

According to the data, Pérez gave lawmakers who raised the most money the best assignments in the new Legislature – posts on the speaker’s leadership team and seats on the powerful “juice committees.”

These are seven of the Assembly’s 30 standing policy committees. They control bills affecting the financial bottom line for the Capitol’s wealthiest interest groups: from banks, insurance companies and public utilities to casinos, racetracks and liquor distributors. For lawmakers who serve on them, the committees are a source of political campaign “juice”: abundant donations.

“There is absolutely no connection, zero connection, between Speaker Pérez’s leadership selections and any political considerations, including fundraising,” he said.

“Speaker Pérez chooses his leadership team based on their ability to serve the people of California” and nothing else, Vigna added.

CIR’s analysis of more than 38,000 contributions to Assembly Democrats in the 2011-12 campaign shows a link between donations to the speaker’s targeted races and a lawmaker’s prospects for important legislative assignments.

The mega-donors to Pérez’s targets – three lawmakers who gave more than $250,000 – obtained positions of power. Each was named to either a leadership post or chairmanship of a juice committee, along with a seat on at least one juice committee. The top donor, Toni Atkins of San Diego, was named Assembly majority floor leader – next to the speaker, the top leadership post.

So does Chris Holden, our apparently paid up power player in the State Assembly, give preferential treatment to the interests of those who fronted him the dough required to buy all that influence in Sacramento?

Let me put it to you this way, chances are you are not someone who has given Chris any substantial checks lately. Have you received any phone calls from your State Assemblyman?

And if you had given our brand new State Assembly Majority Whip a large check in the last year or so, do you think that maybe you would be able to get him on the phone if there was something you needed? Of course you could. Isn't that kind of access what you were really paying for?

Without that money Chris Holden could have been just another rank and file freshman backbencher with little of value to sell. Access costs money and money is power in Sacramento.

Who helped Holden buy his influence in Sacramento? Thanks to Follow the Money.org, that information is only one click away (link). Just to whet your appetite, Sacramento made man Holden has received over $1,000,000 in campaign donations, most of it from influence hungry organizations. It really is quite a roster.

And who is right there among Chris's top campaign donors? The California Association of Realtors.

Now there is a coincidence.

For a hilarious video that accompanies the CfIR's expose', click here. Chris has a neat cameo.

Welcome to Sierra Madre, State Assembly Majority Whip Holden! We have been following your career closely. I don't know how much you know about our town, but we take this kind of stuff rather seriously here. And we do enjoy talking it over with our neighbors.
This isn't Pasadena. Just so you know.
Newer Post Older Post Home