It's Not Just Crazy Drivers: LA Streets Are Designed For Road Rage 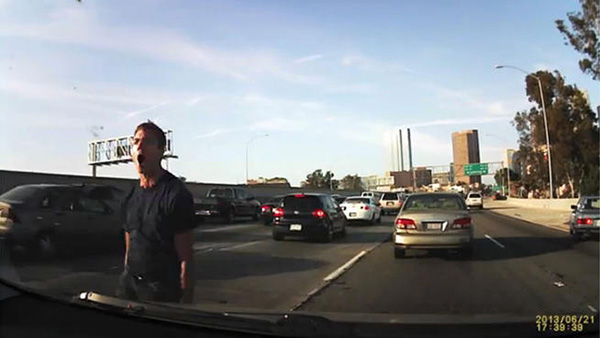 Still shot from viral video of a man seriously raging on an LA freeway.

One of my fellow classmates moved to Los Angeles recently, and this was how she summarized her experience thus far: "People here are all so laid back, but as soon as they get in their cars they go insane!" She's from New York, so I'm sure "laid back" is relative, but she's right: people change when they get in their cars here, becoming more aggressive, easily (and visibly) frustrated, and meaner. Highway congestion tends to get the brunt of the blame for this, and that's understandable, given that it's the worst in the nation.

Often overlooked, however, are the local and arterial streets in the region, which seem to be designed with the specific intent of frustrating drivers, pedestrians, and bicyclists alike. They often encourage dangerous, aggressive behavior and breed animosity between those in vehicles and those on foot. I've been in LA a month; here's what I've seen so far.

This was by far the most surprising difference between LA and other cities I've been to. In most cities, if left turns are allowed at major intersections they have left-turn arrows that turn green for a few seconds, then they turn red and the forward-traveling traffic is given the green. Here, when you need to take a left turn at an intersection, you are usually given a turn lane, but no light to accompany it. You wait until all the traffic in the opposing lanes clears out, then you go. Or, if it never clears, as is the case at hundreds if not thousands of intersections across the city, you wait until the light turns red and then you go, as do one or two people behind you. If you don't run the red light, expect to be honked at vigorously and angrily, because obeying the traffic signals while making a left turn in LA is just not done. 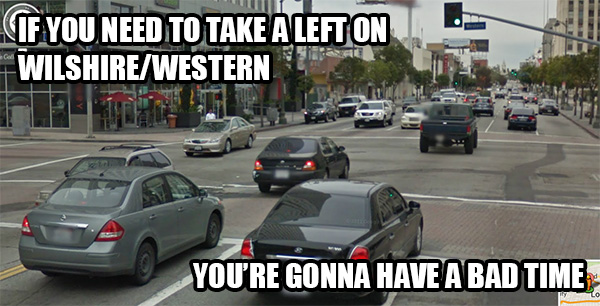 I'm kind of making light of the situation here, but make no mistake, this is an incredible dereliction of duty on the part of city traffic engineers (or whoever is ultimately responsible). Not only does it make drivers needlessly anxious and angry with one another, it's also ridiculously dangerous. The city has given drivers literally no alternative but to blatantly ignore traffic laws, at great peril to themselves, other drivers, and pedestrians. I've already seen several very near misses as a result of this—it's just a matter of time before someone really slips up and gets themselves or someone else killed.

I assume the reason this is so common is throughput: several lanes of traffic can travel at once with a catch-all green light, rather than giving an extra signal turn to a single lane of left-turning drivers. It probably does have some positive effect on traffic. (At least, if you ignore delays caused by collisions with other cars or people.) But—and I really shouldn't even have to say this—encouraging people to illegally drive through several lanes of green-lighted cross-traffic and a crosswalk that people may have already started moving through is not the way to improve traffic flow.

People may not give much thought to these since they show up all over the city, even very pedestrian-heavy areas like downtown and Koreatown. If you don't walk often, or don't really think very hard about how these buttons work, as a pedestrian you might think these buttons are in place for your benefit. In truth, they exist to optimize vehicle travel, not that of pedestrians. (Gary Kavanagh at Streetsblog LA has a good recent writeup on the subject.)

In cities with good walking infrastructure it's taken for granted that there will be pedestrians waiting to cross the street, so they're automatically given a turn when traffic moving in the parallel direction is given the green light. This does have an impact on traffic. Since pedestrians cross the intersection slower than cars, the green light for cars may often stay green longer than it takes for all the cars to get through. This slows things down for cars waiting in the perpendicular directions, but it gives pedestrians sufficient time and safety to cross the street.

By comparison, at many intersections in Los Angeles there are buttons you must hit if you want to be given the walk signal. If you don't manage to hit it before the parallel traffic gets a green light, you're out of luck. The green light will be shorter for cars, and you're instructed to wait for a whole new light cycle. The thing is, there's no functional difference in the way traffic is moving through the intersection when you don't get to the button in time—the difference is that you have less time to cross, cars see you have a red "don't walk" signal at the crosswalk, and they don't necessarily expect you to walk. I and many others still do because it's completely safe, so long as we're aware of what the cars around us are doing and we're across by the time the cross-direction traffic is given the green. But drivers who see a pedestrian walking against a stop signal may get angry that they're being blocked from turning since they're unlikely to understand how the signal works. Combine this with a busy intersection with no left-turn arrow for cars and you've got a recipe for road rage. And that's to say nothing of how unnecessarily dangerous this can be.

As a side note, getting rid of all of these crosswalk buttons would also be cheaper in the long run, as no more would need to be installed, nor would they need to be maintained any longer. And when they do break, what are pedestrians to do? In those cases they're left with no safe means of crossing the road.

This is by no means unique to LA, but in tandem with other street design problems in the city, right turns on red just add to the madness. They don't belong in big cities, LA or otherwise. 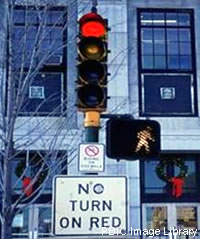 If you're waiting in your car at a red light in Los Angeles you can take a free right as long as the crosswalk and the lane you're turning into are clear. This causes a huge amount of collisions with other drivers and with pedestrians, which is problem enough, but it also causes endless annoyance and frustration to drivers in pedestrian-heavy areas.

The reason is that rather than just wait 20 seconds, drivers are encouraged to try to inch through the intersection when a gap in pedestrian traffic shows up, but anyone who's tried to navigate this delicate maneuver is familiar with the heart-in-your-throat feeling you get when someone seems to jump out of nowhere and you have to stop abruptly (or when someone just needs to hurry the hell up and get through the crosswalk). Now there's a pedestrian angry with you—and rightly so, since they probably feel like you could have seriously injured them—or you're angry at the inconsiderate ped, or both.

It may sound counter-intuitive that limiting the rights of drivers would make them better off, but in this case some paternalism is warranted. The time savings you get from threading the needle through a group of pedestrians is meager, of course. More generally, this fits with a street design ethos that seems to expect professional-level driving skill from the entire population—as does the lack of left-turn signals at intersections. If the 90% of drivers who think they're above average were actually correct, this might be okay, but in the real world building your roads so that only the most skilled can use them safely is a recipe for disaster. (As a side note, this might also discourage people from "cruising" in high-traffic areas looking for parking—estimated to be responsible for as much as 74% of downtown traffic—since the penalty for constantly circling around the block taking right turns would be much higher if you had to wait at every light.)

In either case this just adds to the stress of driving. If you've tried driving in an area like downtown you've almost certainly been yelled at by a pedestrian; it was probably as you blocked the crosswalk and they flipped you off and walked around your car. It wasn't intentional, and you felt appropriately contrite, but I can almost guarantee you ended up in that position while trying to take a free right turn. Once again, the city's design pitted you against the pedestrian and the results were predictable.

These are mostly easy fixes in the grand scheme of things, both in technical difficulty and expense. Maybe some of the congestion savings yielded from the massive traffic light synchronization effort can be used to improve safety and reduce the tension and stress of commuting.

I'm still a new resident to Los Angeles and sure to have missed some things. What other street design problems have you seen here, or in other cities? Have you seen any particularly innovative solutions?
Newer Post Older Post Home