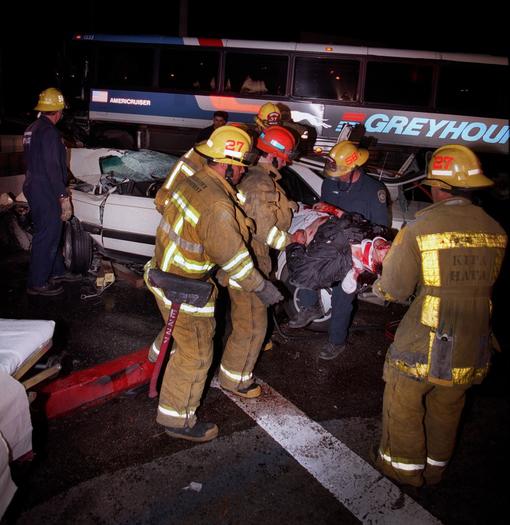 One person died and over a dozen people were injured after a hit-and-run driver crashed his car into a Greyhound bus at the intersection of Sunset Boulevard and Vine Street in Hollywood.

The council agreed to support state legislation to increase penalties for those caught after leaving the scene of an accident and expand the use of the police department's crime tracking network to evaluate hit-and-run incidents.

The council also asked the department and its oversight board to include  hit-and-run incidents in department crime tallies and require police reports on all such incidents, even if they are limited to property damage.

Councilman Tom LaBonge asked for several years of data that would show  whether hit-and-run incidents have increased.

LAPD Commander Mike Williams told the council that  more than 14,000 hit-and-run incidents have occurred in the city so far this year, a 3% rise over last year. "It is truly a crisis," Williams said.
Just last Friday night, a 16-year-old was killed in a marked crosswalk on Normandie Avenue as he walked home from church.

The driver of the white four-door sedan that struck the youth sped away northbound without stopping, police said.


LAPD to ramp up hit-and-run policies

Los Angeles city officials agreed Tuesday to take a tougher stance on how it treats and tracks hit-and-runs, dropping the perception that they are accidents and voting to adopt a longer statute of limitation for serious ones.

“We understand that accidents happen,” Councilman Joe Buscaino said. “But if you are in an accident and run away, you are a coward and a criminal. I’m tired of us having to vote to offer rewards because of hit-and-runs.”

The Los Angeles Police Department has estimated there are 20,000 hit-and-runs in the city each year, many involving property damage.

Cmdr. Mike Williams believes there need to be stronger penalties. “We are just as tired of seeing these hit-and-runs on the news as you are,” Williams said. “It is a crisis.”

He noted that the department is paying closer attention to the incidences to make sure officers investigate all cases.

The city will begin seeking the revocation of driver’s licenses for those involved and the forfeiture of their vehicles, Buscaino said. In addition, thanks to a new state law, the statute of limitations on hit-and-runs will be extended for six years.

The council also went on record in asking the state to have hit-and-runs always be declared a crime and never an accident.


Councilman Mitch Englander believes the most important thing is that the city will begin tracking hit-and-runs through its CompStat crime-mapping program, which will allow officers to focus on areas where there might be a higher ratio.