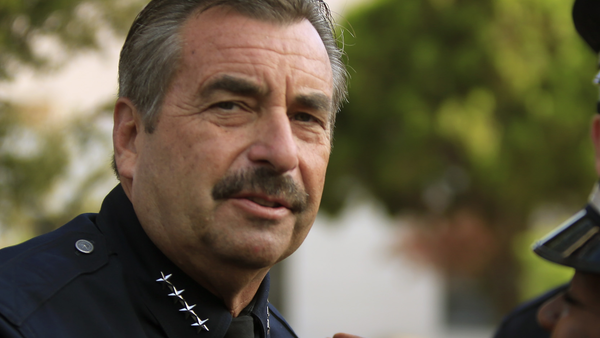 A day after rescinding the policy to adhere to a court ruling, Charlie Beck refuses to back down from his belief that the impound rules are legal and should be allowed to remain in place.

A day after he rescinded the LAPD's controversial car impound policy to adhere to a court ruling, police Chief Charlie Beck refused to back down from his belief that the impound rules are legal and should be allowed to remain in place.

On Friday, Beck quietly sent word to his officers that they should not follow the impound rules, called Special Order 7, in light of a recent decision by Los Angeles County Superior Court Judge Terry Green to strike down the policy because it violates state law.

In an interview Saturday, Beck declined to say outright whether lawyers for the city would appeal Green's ruling, saying that was a decision for City Atty. Mike Feuer to make. Beck, however, signaled strongly that an appeal was likely, saying he "looks forward to the next phase of the judicial process."

Beck also reaffirmed his stance that he acted within his powers when he implemented Special Order 7 and that Green's ruling "undermines the authority of the Police Department to regulate the conduct of its officers."

Despite his disagreement with the judge, Beck said he had no choice but to comply with Green's order to rescind the impound rules. Prior to Beck's move on Friday, it had been widely expected that city lawyers would try to keep Special Order 7 in place during the lengthy appeals process by asking a state appeals court to set Green's ruling aside pending their decision.

A spokesman for Feuer did not return calls for comment on whether he would still request the stay on Green's ruling from the appellate court. Michael Kaufman, an attorney for the American Civil Liberties Union, which has joined the city in defending the legality of the impound rules, said his group would do so with or without the city's help.

Under the terms of Special Order 7, if police stopped an unlicensed driver who met several requirements -- including having auto insurance, valid identification and no previous citations for unlicensed driving -- officers could no longer invoke the part of the state vehicle code that allowed them to confiscate the vehicle for 30 days, a punishment that came with fines and charges often exceeding $1,200.

In a city with an estimated 400,000 immigrants who are in the country illegally and forbidden by state law from obtaining driver's licenses, Beck and the LAPD’s civilian oversight board, which approved the policy, argued that Special Order 7 was needed for moral and practical reasons. The 30-day holds, they said, unfairly burdened such drivers, who often are poor and feel they have no choice but risk having their cars seized to drive to work or take their children to school. Beck said he expected that the policy would encourage unlicensed drivers to take steps such as buying insurance to avoid the monthlong holds.

“It's not so much that I am a dove on immigration,” Beck said in an earlier interview with The Times. “It's that I'm a realist. I recognize that this is the population that I police. If I can take steps -- legal steps -- to make them a better population to police, then I will.”

The union that represents rank-and-file officers and Judicial Watch, a conservative-leaning watchdog organization based in Washington, sued the department over the policy, arguing it improperly attempted to supersede the state’s impound laws that gave some discretion to officers on whether to use the 30-day hold on a car or not.

Tyler Izen, president of the police union, said in an interview Saturday, "I always believed that what the chief was doing was not the solution to a problem that I agree needs to be addressed."

"Letting people drive without driver's licenses is reckless, and that's what he was trying to allow," Izen said.

Emphasizing that the union has not taken an official position on a bill passed this month by the state Legislature that would allow immigrants in the country illegally to receive licenses, Izen said: "We've made the decision that healthcare and education are humanitarian issues. We should make the decision whether a driver's license ... is a humanitarian issue as well."

Beck issued a new directive Friday to replace Special Order 7. “The purpose of this Notice is to provide guidance to officers when making a vehicle impound/removal decision concerning drivers without a valid license,” he wrote on the department’s internal computer network. In perhaps what was an indication that the city still plans to appeal Green’s ruling, Beck added that officers should not adhere to Special Order 7 “until further notice.”

The switch from the order returns to officers some level of authority when deciding on impounds, but instructs them to take a common-sense approach spelled out in a legal principle called the Community Caretaking Doctrine. They should, Beck wrote, “take into account the ‘totality of the circumstances' to determine whether an impound/removal is appropriate.”

For example, Beck instructed, an impound is acceptable if there is no other way to prevent “the immediate and continued unlawful operation” of a car. However, according to the Caretaking Doctrine, if someone else in the car has a license or the unlicensed driver is already at his residence when he is pulled over, then the officer should not impound the car, Beck said.

Beck also tried to clarify for officers the multiple sections of the state vehicle code that authorize officers to use the 30-day hold in some cases and a less severe impound in others, under which a driver can retrieve his car immediately.

Beck repeated on Saturday his belief that the various sections of the code overlap with each other and are confusing for officers. The result, he said, is that unlicensed drivers are left at the mercy of individual officers, some of whom may take a more lenient approach than others.

“Officers should determine which statutory authority is most appropriate for the given circumstance,” Beck wrote.
Newer Post Older Post Home