A brush fire burning in the Angeles National Forest has charred between five to 10 acres by Monday night.

A dispatching supervisor with the Los Angeles County Fire Department said firefighters were working with the U.S. Forest Service on the blaze which has burned an estimated five to 10 acres by 6:30 p.m. and was heading north into the forest.

No injuries have been reported. 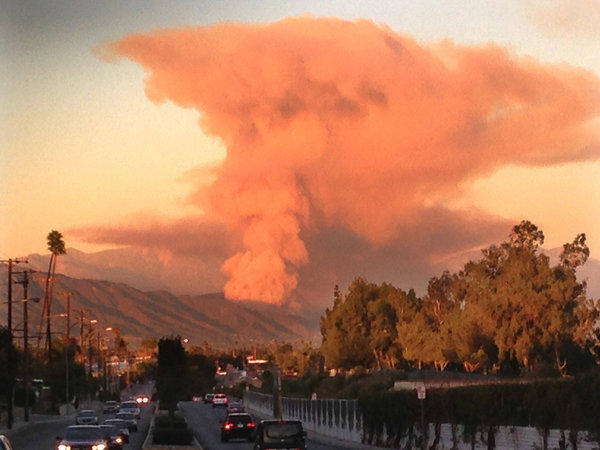 Voluntary evacuation orders were issued for residents of several homes in the San Gabriel Canyon in Azusa as firefighters continued to battle a brush fire that had scorched at least 40 acres.


The evacuation order came after 7 p.m. for the homes on Foxtail Court, which is part of a housing development on the north side of California 39, the Azusa Police Department said.

The highway was closed north of Foothill Boulevard to allow fire engines and other emergency vehicles to access the brush fire area, according to police.

More than 200 firefighters were battling the blaze Monday night.

Two water-dropping helicopters -- one with the U.S. Forest Service, the other with the Los Angeles County Fire Department -- were making nighttime water drops, according to fire officials.

"It's looking really good right now," said Nathan Judy, a spokesman for the Angeles National Forest. "There's not a whole lot of wind."

He said crews on the ground were working hot spots along the fire flanks. A hand crew had been taken by helicopter to the top of a ridge and was cutting a containment line ahead of advancing flames.
The blaze, called the Madre fire, quickly spread from less than an acre as flames raced up a mountainside after breaking out about 6 p.m., fire officials said.

Earlier, a Super Scooper aircraft was making repeated aerial assaults on the flames. The aircraft does not operate at night, officials said.

Thick clouds of smoke could be seen for miles.