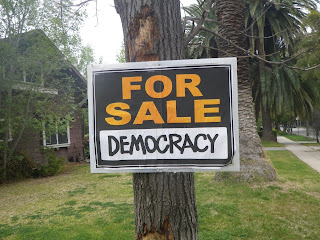 Ask a League representative for details

In case you are not aware, today kicks off this year's League of California Cities Conference in Sacramento. Our Mayor Nancy Walsh, along with an unidentified number of City of Sierra Madre officials (unidentified probably because the cost of sending them to this event has been a source of controversy in the recent past), are by now happily jetting off to the state capitol to participate in this yearly rite of advocacy and bonhomie, conducted for local officials by people who love them. Or, more likely, want something. And they always want something. Why else would they be throwing this shindig?

This conference is a key opportunity for many powerful statewide confabulations to sink their talons into tax money empowered local elected officials and get them to work in their interest. You know, rather than the interests of those folks back home who paid for all that airfare? And you do know that these very special interests will have come prepared to get exactly what it is they want. This has all been carefully planned for months. Think of it as a shark tank at the aquarium, with a feeding time that stretches over three days.

Another critter-centric metaphor would be "lambs to the slaughter." Do feel free to take your pick.

Of course, the Leaguers don't come right out and actually say any of that, and most officials such as our Mayor Walsh probably do believe that they are going there to do good by their constituents while networking with key government and private sector players over a couple of drinks. Just someone please try and keep the Buxton people away from her.

Here is how The League describes the event:

Join hundreds of city officials at the League’s 2013 Annual Conference & Expo for educational sessions and speakers that will provide innovative ideas to better serve your city and residents. Visit the Expo Hall to find state-of-the-art products and cost-saving services and explore the League Partner Speaker Theater.

The Expo will showcase nearly 230 exhibitors, including more than 50 first-time exhibitors. Make time to meet the vendors and learn how your city can benefit from their products, services and resources. The Expo Grand Opening, held in conjunction with the Host City Reception, is slated to run from 5:00 to 7:00 p.m. on Wednesday, Sept. 18. The Expo will be open on Thursday, Sept. 19, from 10:00 a.m. to 3:00 p.m.

A Grand Prize will be given away during this year’s conference. Your city could win a language-interpretation system ($4,000 value), provided compliments of SmartCitiesPrevail.org. These systems are typically used for city council meetings. The drawing will be held Friday, Sept. 20, during the Annual Business Meeting, which begins at noon. Be sure to look for entry details inside the Expo Hall entrance. You must be present at the Annual Business Meeting to win.

A language interpretation system would be very useful here in Sierra Madre. It could be used to help clear up what exactly our City officials mean when they use such words as "process," "local strategic partnerships," "paradigm," "sustainability" and "best practices."

As an example: "The process involves the creation of a new sustainable paradigm where best practices will help assure a lasting viability for all interested local strategic partnerships." It would take quite a miraculous piece of machinery indeed to make much sense of that one.

The big issue is, as usual, how to get more taxes out of the citizenry. It is always a key League of California Cities priority, and this conference is where they like to bring all of the latest strategies for separating the citizenry from their cash to the attention of the attendees. Here is this year's biggest bouncing baby (link):

Local Government: Special Taxes: Voter Approval - Lowers the vote threshold for a local agency to levy, increase, or extend any special tax from 2/3 to 55%.

The California Constitution states that taxes levied by local governments are either general taxes, subject to majority approval of its voters, or special taxes, subject to 2/3 vote (Article XIII C).  Proposition 13 (1978) required a 2/3 vote of each house of the Legislature for state tax increases, and 2/3 vote of local voters for local special taxes.  Proposition 62 (1986) prohibited local agencies from imposing general taxes without majority approval of local voters, and a 2/3 vote for special taxes.  Proposition 218 (1996) extended those vote thresholds to charter cities, and limited local agencies' powers to levy new assessments, fees, and taxes. Local agencies generally propose to increase taxes by adopting an ordinance or a resolution at a public hearing. The Constitution further bars school districts from imposing general taxes, but allows school districts, community college districts, and  county offices of education to issue bonded indebtedness for school facilities with 55% percent approval (Proposition 39, 2000).

Senate Constitutional Amendment 11 lowers the vote threshold for local agencies imposing, extending, or increasing any special tax from 2/3 to 55%.  The measure also makes conforming changes to the Constitution.

Do you recall last year's Measure J? It would have raised sales taxes in Los Angeles County had it received 2/3s of the vote. Fortunately it did not (Measure J failed by a mere 0.6%), with the result being that organizations like Metro were denied the extra funding they felt they needed to help bring forward such unfortunate projects as the godforsaken 710 Tunnel.

The statewide powers that operate the League of California Cities are never happy about taxpayers having any control over how much taxes they will pay, and this matter will be put before the voting representatives of cities like ours at this conference. How do you think Sierra Madre Mayor Nancy Walsh will be voting? Will she cast a ballot to make it easier to raise our taxes on a state and county level?

This should actually be a fairly easy matter for Nancy. Here is the link to how the League of California Cities would prefer her to vote. In the face of such an estimable level of persuasion whatever we might actually want probably won't matter. I'm not sure she ever even asked.

There is also Proposition 26, which thwarts the ability of the State of California to tax at a level they are comfortable with. It passed in 2010 (link), but apparently some people there are still pretty chapped about it. What this has to do with the interests of a so-called league of cities is anyone's guess, but that is hardly the point. Here is how the dummy sheet reads for this one (link):

Much effort has been expended trying to explain and analyze the purpose and effect of Proposition 26, the so-called “Stop Hidden Taxes Initiative.” Wading into the morass of municipal finance is a daunting task even for the expert, and Prop. 26 adds another layer of complexity to an already complicated area. This article provides the non-expert with tools to gain a working knowledge of Prop. 26.

Prop. 26’s genesis occurred in 1997 with the California Supreme Court’s decision in Sinclair Paint v. State Board of Equalization.1 In this case, Sinclair Paint challenged a state fee imposed on companies that utilized lead to manufacture paint and other products. The fee was used to fund various state programs to address the impact of lead exposure on children. Sinclair Paint argued that this was not a fee but rather a tax, because Sinclair Paint did not benefit from any of the programs funded by the fee.

Why is this distinction important? A fee may be adopted by the Legislature with a simple majority vote. A tax, on the other hand, requires a two-thirds vote of both houses for approval.

How will Nancy handle this issue when she is asked to express her opinions on the matter? The League will recommend to her how she should feel about Prop 26, and she will likely agree when called upon to do so. My guess is she will comply with their wishes and express concern.

Another topic that the League of California Cities frets over every year is how to pack more high density SCAG Housing (or ABAG Housing if you live up north) into cities where people not only don't want the stuff, but fight to oppose it in any way that they possibly can. Including not supporting the levying of higher taxes to help fund these purportedly planet forward imperatives. So how will Sierra Madre Mayor Nancy Walsh deal with this one (link)? Here is what the League has to say:

Compact development in existing urban areas requires an analysis of the existing parcel and the quality of the services that will be needed, whether it’s more sewer capacity, fire trucks that can make multi-story rescues, modern stormwater systems that can meet new federal requirements or improved schools to keep families from seeking higher performing school districts (as measured by test scores).

When cities approve development in "greenfields" (undeveloped land), much of the cost of infrastructure is captured through development fees because the new infrastructure will serve only the new development. The fees therefore meet the proportionality requirement of the Takings Clause of the federal and state constitutions, which in essence says you can charge fees only in proportion to the development’s impact. Likewise, Mello Roos financing districts can be created to cover the ongoing cost of providing services for schools, parks and other improvements.

This natural proportionality does not exist in urbanized areas. Any new infrastructure must serve old and new residents alike. But the proportionality requirement limits the amount that cities can charge developers --- new development can pay only its fair share. Cities are specifically prohibited from charging fees on new development to fix deficiencies in existing infrastructure (see California Government Code section 66001g).

Thus, cities must turn to other revenue sources. But they encounter another constitutional limitation: the two-thirds voting requirements of Props. 13 and 218 on property taxes and assessments.

In short, to fund the infrastructure needed to make infill work, local governments must get two-thirds of the existing residents within an urbanized area to approve a new assessment or tax in order to approve a project that will, in effect, create more density and traffic in their neighborhoods.

There really is all an awful lot to have to think about when you go to a League of California Cities conference. Fortunately there will be plenty of the buffets and social occasions needed to help take some of that pressure off.

Perhaps the key to having a good time at a League of California Cities Conference is to just cast your votes as you are told, and then head on out to the bar just as quickly as possible?

If so, then we are certainly sending the right people. Besides, isn't that really why most elected local officials go there?