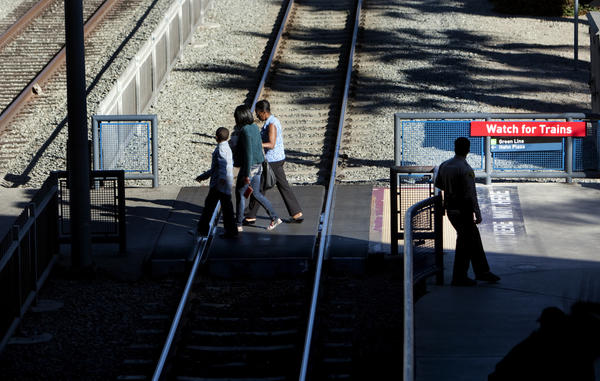 Pedestrians cross the tracks at a Metro Blue Line station. A man was struck and killed Friday evening by a Blue Line train in South L.A., disrupting service during rush hour and causing delays.

A man was struck and killed Friday evening by a Metro Blue Line train in South L.A., disrupting service during rush hour and causing delays.

The incident took place about 6:20 p.m. at the Vernon Avenue station, according to Metro spokesman Paul Gonzales.

The pedestrian, in his 30s or 40s, stepped onto the southbound tracks about 20 yards shy of the station just as a train was arriving, Gonzales said.

Witnesses told investigators the man appeared to be checking for a train coming from the opposite direction and may have been distracted, according to Metro. Gonzales said the crossing arm was down, and audible signals and flashing lights functioned properly.

The Los Angeles Police Department's Southeast Division was investigating the death, Gonzales said.
Trains in both directions were running on the northbound tracks, with a delay of about 12 to 15 minutes by 8 p.m., according to the Metro spokesman. He said normal service could resume as early as 9 p.m.
Newer Post Older Post Home