After a deadly L.A. train crash in 2008, Congress mandated that the technology be in place by the end of 2015. Metrolink is one of the only railroads on track. 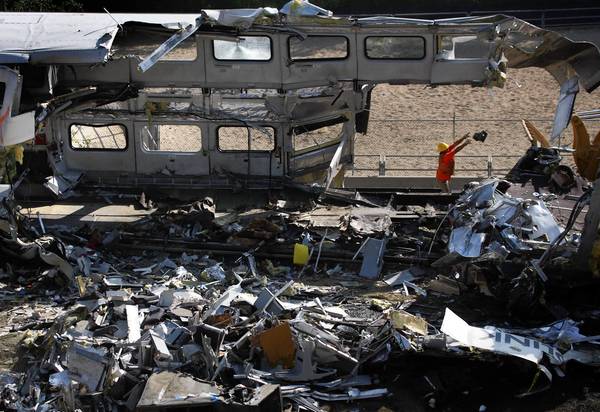 The deadly 2008 Metrolink crash in Chatsworth prompted Congress to pass legislation requiring the nation's railroads to install a collision-avoidance system by Dec. 31, 2015.

WASHINGTON — Spurred by a deadly train crash in Los Angeles, Congress in 2008 passed with great fanfare legislation requiring the nation's railroads to install a sophisticated collision-avoidance system by the end of 2015.


Five years later, an industry move to extend the deadline to 2020 is picking up steam on Capitol Hill.
Southern California's Metrolink is on schedule to complete the high-tech project by next spring along 512 miles of track.

But many railroad industry officials cite the complexity of the effort and the cost of at least $10 billion to implement "positive train control," known in industry circles as PTC, on about 60,000 miles of track nationwide.

California Sens. Barbara Boxer and Dianne Feinstein are fighting to preserve the deadline, contending that if Metrolink can meet it, other railroads can too. Metrolink operated the commuter train that slammed head-on into a freight train in Chatsworth on Sept.12, 2008, killing 25 people and injuring 135.

The senators, who originally pushed for an even earlier deadline, are up against an industry that spent more than $45 million on lobbying in the capital last year, according to the Center for Responsive Politics, and has employed high-powered lobbyists, including former lawmakers, to help make the case for more time to put the train control system in place.

The National Transportation Safety Board has long made implementation of positive train control a top safety recommendation. Although the NTSB has taken no position on legislation to extend the deadline, board member Robert L. Sumwalt said, "For every day that PTC is delayed, we have the continued risk of rail collisions."

"What are the railroads afraid of? They are just looking into their pocketbooks and don't care about human lives," said Barbara Kloster of Thousand Oaks, whose son Mike was almost killed in the crash.

"When these things occur, everyone says, 'What a tragedy,'" said Jim Paulson, 63, of Camarillo, a former train conductor who suffered head injuries and a broken shoulder in the collision. "Then nothing happens."

The requirement for positive train control was included in a rail safety bill signed by President George W. Bush about a month after the Chatsworth crash. Then-Sen. Barack Obama (D-Ill.) was among those who voted for the legislation.

The collision with a Union Pacific freight train — one of the deadliest rail crashes in California history — occurred when a text-messaging Metrolink engineer failed to stop at a red signal, federal investigators concluded.

Officials for Metrolink say they are on schedule to meet the deadline set in 2008. (The Southeastern Pennsylvania Transportation Authority says it is also on schedule.)

"We are absolutely on track regardless of what happens in Washington," said Jeff Lustgarten, a spokesman for Metrolink.

The commuter railroad averages about 42,000 boardings a day and serves six Southern California counties. It has made steady progress developing the sophisticated safety technology that relies on an array of electronic gear that monitors and, if necessary, takes control of trains to prevent accidents.
The agency plans to spend about $210 million on the project, and is working with Union Pacific and the Burlington Northern Santa Fe Railway Co.

The Government Accountability Office, Congress' investigative arm, recently reported that most railroads expect to miss the Dec. 31, 2015, deadline and recommended that lawmakers consider granting the Federal Railroad Administration authority to extend the deadline on a case-by-case basis.
GAO officials note that industry representatives have described the system as the "biggest change in the railroad industry since it transitioned from steam to diesel locomotives in the mid-20th century."

The head of the Assn. of American Railroads calls the system an "unprecedented" technical challenge, citing the task of installing about 20,000 antennas along tracks to transmit signals for trains to automatically slow down or stop if engineers miss signals, exceed speed limits or are on a collision course.

The Senate bill to extend the deadline to Dec. 31, 2020, and empower the secretary of Transportation to grant additional one-year delays was introduced by Sen. John Thune of South Dakota, the top Republican on the Senate Commerce, Science and Transportation Committee, and has picked up two Democrats and five other Republicans as cosponsors.