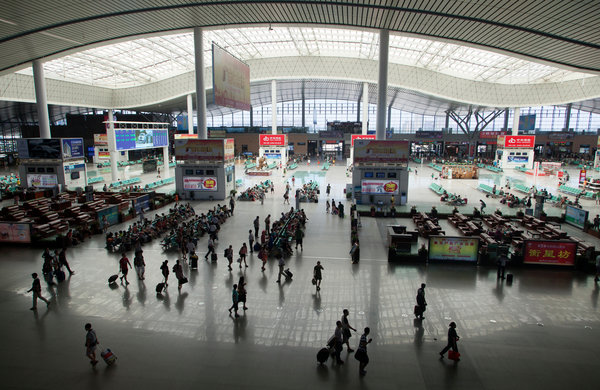 The high-speed rail station in Changsha, China, opened less than four years ago.

CHANGSHA, China — The cavernous rail station here for China’s new high-speed trains was nearly deserted when it opened less than four years ago.

Not anymore. Practically every train is sold out, although they leave for cities all over the country every several minutes. Long lines snake back from ticket windows under the 50-foot ceiling of white, gently undulating steel that floats cloudlike over the departure hall. An ambitious construction program will soon nearly double the size of the 16-platform station.

Just five years after China’s high-speed rail system opened, it is carrying nearly twice as many passengers each month as the country’s domestic airline industry. With traffic growing 28 percent a year for the last several years, China’s high-speed rail network will handle more passengers by early next year than the 54 million people a month who board domestic flights in the United States.

Li Xiaohung, a shoe factory worker, rides the 430-mile route from Guangzhou home to Changsha once a month to visit her daughter. Ms. Li used to see her daughter just once a year because the trip took a full day. Now she comes back in 2 hours 19 minutes.

Business executives like Zhen Qinan, a founder of the stock market in coastal Shenzhen, ride bullet trains to meetings all over China to avoid airport delays. The trains hurtle along at 186 miles an hour and are smooth, well-lighted, comfortable and almost invariably punctual, if not early. “I did not think it would change so quickly. High-speed trains seemed like a strange thing, but now it’s just part of our lives,” Mr. Zhen said.

China’s high-speed rail system has emerged as an unexpected success story. Economists and transportation experts cite it as one reason for China’s continued economic growth when other emerging economies are faltering. But it has not been without costs — high debt, many people relocated and a deadly accident. The corruption trials this summer of two former senior rail ministry officials have cast an unfavorable light on the bidding process for the rail lines.

The high-speed rail lines have, without a doubt, transformed China, often in unexpected ways.
For example, Chinese workers are now more productive. A paper for the World Bank by three consultants this year found that Chinese cities connected to the high-speed rail network, as more than 100 are already, are likely to experience broad growth in worker productivity. The productivity gains occur when companies find themselves within a couple of hours’ train ride of tens of millions of potential customers, employees and rivals.

“What we see very clearly is a change in the way a lot of companies are doing business,” said Gerald Ollivier, a World Bank senior transport specialist in Beijing.

Productivity gains to the economy appear to be of the same order as the combined economic gains from the usual arguments given for high-speed trains, including time savings for travelers, reduced noise, less air pollution and fuel savings, the World Bank consultants calculated.

Companies are opening research and development centers in more glamorous cities like Beijing and Shenzhen with abundant supplies of young, highly educated workers, and having them take frequent day trips to factories in cities with lower wages and land costs, like Tianjin and Changsha. Businesses are also customizing their products more through frequent meetings with clients in other cities, part of a broader move up the ladder toward higher value-added products.

Li Qingfu, the sales manager at the Changsha Don Lea Ramie Textile Technology Company, an exporter of women’s dresses and blouses, said he used to travel twice a year to Guangzhou, the commercial hub of southeastern China. The journey, similar in distance to traveling from Boston to Washington, required nearly a full day in each direction of winding up and down mountains by train or by car.

He now goes almost every month on the punctual bullet trains, which slice straight through the forested mountains and narrow valleys of southern Hunan province and northern Guangdong province in a little over two hours, traversing long tunnels and elevated concrete viaducts in rapid succession.

“More frequent access to my client base has allowed me to more quickly pick up on fashion changes in color and style. My orders have increased by 50 percent,” he said.

China relocated large numbers of families whose homes lay in the path of the tracks and quickly built new residential and commercial districts around high-speed train stations.

The new districts, typically located in inner suburbs, not downtown areas, have rapidly attracted large numbers of residents, partly because of China’s rapid urbanization. Enough farm families become city dwellers each year to fill New York City, part of a trend visible during a series of visits to the Changsha high-speed train station over the last four years.

When the station opened at the end of 2009 in an inner suburb full of faded state-owned factories, the neighborhood was initially silent. But by 2011, nearly 200 tower cranes could be counted building high-rises during the half-hour drive from downtown Changsha to the high-speed rail station. On a morning last month, only several dozen tower cranes were visible along nearly the same route. But a vibrant new area of apartment towers, commercial office buildings and hotels had opened near the train station.

China’s success may not be easily reproduced in the West, and not just because few places can match China’s pace of urbanization. China has four times the population of the United States, and the great bulk of its people live in the eastern third of the country, an area similar in size to the United States east of the Mississippi.

“Except for Boston to Washington, D.C., we don’t have the corridors” of high population density that China has, said C. William Ibbs, a professor of civil engineering at the University of California, Berkeley.

China’s high-speed rail program has been married to the world’s most ambitious subway construction program, as more than half the world’s large tunneling machines chisel away underneath big Chinese cities. That has meant easy access to high-speed rail stations for huge numbers of people — although the subway line to Changsha’s high-speed train station has been delayed after a deadly tunnel accident, a possible side effect of China’s haste.

New subway lines, rail lines and urban districts are part of China’s heavy dependence on investment-led growth. Despite repeated calls by Chinese leaders for a shift to more consumer-led growth, it shows little sign of changing. China’s new prime minister, Li Keqiang, publicly endorsed further expansion of the 5,900-mile high-speed rail network this summer. He said the country would invest $100 billion a year in its train system for years to come, mainly on high-speed rail.

The Chinese government is already struggling with nearly $500 billion in overall rail debt. Most of it was incurred for the high-speed rail system and financed with bank loans that must be rolled over as often as once a year. Using short-term loans made the financing look less risky on the balance sheets of the state-controlled banking system and held down borrowing costs. But the reliance on short-term credit has left the system vulnerable to any increase in interest rates.

“Even well-performing railways capable of covering their cash running costs and interest on their debt will almost certainly be unable to repay the principal without some long-term financing arrangements,” said a World Bank report last year.

Another impact: air travel. Train ridership has soared partly because China has set fares on high-speed rail lines at a little less than half of comparable airfares and then refrained from raising them. On routes that are four or five years old, prices have stayed the same as blue-collar wages have more than doubled. That has resulted in many workers, as well as business executives, switching to high-speed trains.

The double-digit annual wage increases give the Chinese enough disposable income that domestic airline traffic has still been growing 10 percent a year. That is the second-fastest growth among the world’s 10 largest domestic aviation markets, after India, which now faces a slowdown as the fall of the rupee has made aviation fuel exorbitantly expensive for air carriers there.

High-speed trains are not only allowing business managers from deep inside China to reach bigger markets. They are also prompting foreign executives to look deeper in China for suppliers as wages surge along the coast.

“We always used to have go down south to Guangzhou to meet with European clients, but now they come up to Changsha more often,” said Hwang Yin, a sales executive at the Changsha Qilu Import and Export Company.

The only drawback: “The high-speed trains are getting very crowded these days.”
Newer Post Older Post Home