Thanks to Jan SooHoo

Sediment cleanup efforts resume as officials plan for a much larger effort at Hahamonga. 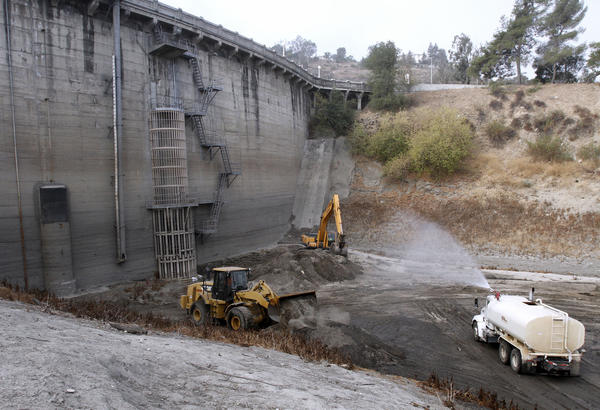 Los Angeles County Department of Public Works crews are removing about 4,000 cubic yards of dirt from the base of Devil's Gate Dam at Hahamongna Watershed Park in Pasadena on Wednesday, Sept. 18, 2013. It will take about one and a half weeks to complete the project.

Los Angeles County work crews returned to Hahamongna Watershed Park this week to remove mud and debris from the face of Devil's Gate Dam in preparation for the coming storm season.

The effort, expected to take about four weeks, is the third minor cleanout behind the dam since massive amounts of sediment washed into it from denuded areas of the Angeles National Forest during storms that followed the August 2009 Station fire.

But the job represents only a fraction of the work that may be needed to keep the 93-year-old flood control structure in the upper part of Pasadena's Arroyo Seco watershed functioning smoothly, according to county engineers.

In October the Los Angeles County Department of Public Works is expected to release a study that contemplates hauling as much as 4 million cubic yards of dirt out of the basin behind the dam, said spokesman Kerjon Lee.

That's enough to fill the Rose Bowl, located about two miles downstream from the dam, roughly 10 times, according to documents.

By contrast, this season's cleanout involves only about 5,000 cubic yards.

The maximum potential work area could involve removing some 50 acres of woodland that has grown over sediment deposits that were building up for years before the Station fire unleashed another 1.3 million cubic yards into the area.

“This is a massive cleanout of the basin that is going to dramatically impact the habitat, stream characteristics and even the recreational uses of the Hahamongna basin,” said Tim Brick, managing director of the Arroyo Seco Foundation, an environmental preservation group.

Though apprehensive about the project, Brick also acknowledges that at least some of the dirt behind the dam must go.

But he's hoping for a plan that will allow some sediment to pass through Devil's Gate and replenish waterways below.

About a half-mile of concrete channels in the Arroyo may be converted to natural streambeds as part of an effort by the U.S. Army Corps of Engineers to naturalize parts of the Los Angeles River and its tributaries.

County workers initially removed 15,000 cubic yards of sediment from behind Devil's Gate in 2011 and installed debris barriers on the dam as a temporary measure to prevent clogging.

Sediment removed by workers has been and will continue to be stored at a former groundwater spreading basin in Hahamongna northeast of the dam, Lee said.

Also in keeping with previous years, green waste will be trucked out to the Scholl Canyon Landfill along Windsor Avenue in Altadena and the Foothill (210) Freeway.

Truck traffic will be restricted during this year's cleanout to no more than 10 trucks per day to limit impacts to park neighbors, Lee said.

County officials have previously said removal of up to 4 million cubic yards of sediment could involve hundreds of truck trips in or out of the park each day over a span of several months.
Newer Post Older Post Home