The Tattler Weekend News: Information You Need, When You Need It 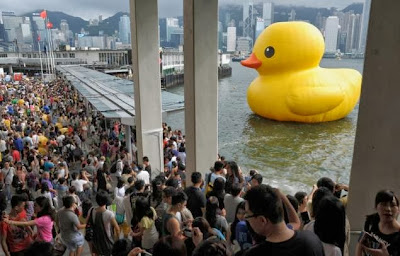 Hundreds learning to face their fears


(Mod: Have you ever wondered what a former scourge of the British punk rock movement would look like if he was doing a butter ad? Your dreams will come true if you click here. Have you ever wondered what a very large rubber duck would look like if it was towed down Pittsburgh's historic Allegheny River? I never have, but if you want you can click here. And what if you really needed to know how many books you'd have to read in order to get a free cheeseburger? Then you would click here. We are all about getting you the answers you want here at the Sierra Madre Tattler. And this is exactly why we are honored to bring you the Weekend News. So that you too can share in our dream.)

Chinese doctor builds new nose on man's forehead (KansasCity.com link): A surgeon in China says he has constructed an extra nose out of a man's rib cartilage and implanted it under the skin of his forehead to prepare for a transplant in probably the first operation of its kind.

In this Tuesday Sept. 24, 2013 photo, a 22-year-old patient, with a surgical made extra nose out of his rib cartilage and implanted under the skin of his forehead, rests at Fujian Medical University Union Hospital, in Fuzhou city, in southeast China's Fujian province. A surgeon in China said he has constructed the extra nose to prepare for a transplant in probably the first operation of its kind. Surgeon Guo Zhihui at the hospital spent nine months cultivating the graft for the man whose nose was damaged.

The striking images of the implant — with the nostril section facing diagonally upward on the left side of the man's forehead — drew widespread publicity after they began to circulate in Chinese media this week. Guo plans to cut the nose from the forehead while leaving a section of skin still connected, and then rotate and graft it into position in a later operation.

"We were just interested in helping the man and did not expect it would stir up this much attention," Guo said in an interview Friday with The Associated Press.

(Mod: You can only hope that this won't develop into a fashion statement. Or that multiple forehead noses won't evolve into some sort of a prestige issue.)

What California Comeback? (Real Clear Politics link): Since November’s election and, with it, a referendum in the Golden State on higher taxes—Gov. Jerry Brown’s Proposition 30—reporters have a new pet story: the so-called “California Comeback” and the tale of a state that’s rediscovered its economic footing.

However, judging by the results of the Hoover Institution’s latest Golden State Poll, which surveyed Californians on their economic confidence, the resurgence is fragile, with skepticism easily trumping optimism.

Following the passage of Prop 30, the state became flush with tax revenue, helping to “balance” the budget (that balancing act being a game of numerical smoke and mirrors). However, Californians aren’t convinced Sacramento won’t come a-knocking’ again. Seventy four percent of Californians in our Hoover survey believe state taxes will increase either a little or a lot over the next three years—this despite the fact that Prop 30’s tax increases won’t expire until the 2019 fiscal year. Just 15 percent of Californians think their taxes will remain the same, while 2 percent believe taxes will decrease.

The Golden State Poll showed that higher taxes are a concern that crosses incomes levels. Seventy five percent and 73% of those making between $40,000 and 100,000 and under $40,000, respectively, believe state taxes will increase a little or a lot. Interesting, liberals and Democrats (59 percent and 67 percent, respectively) predicted taxes would go up—reaffirming that the State Legislature, with a supermajority of liberal lawmakers in both chambers, has a default position of raising taxes and fees.

(Mod: It is time we all moved to Jefferson. I know a couple of Sierra Madre people who are in the process of doing just that. They are very happy and have no regrets.)

The FPPC’s New Role: The Internet Cop (Fox & Hounds link): Last week, as a parting gift to its chairwoman, Ann Ravel (who is slated to be confirmed to the Federal Election Commission), the California Fair Political Practices Commission enacted a sweeping proposal to regulate online political communication. The move makes California the first state  to attempt to require the disclosure of online communication by someone paid by a campaign to engage in social media.

The reason for this pioneering regulation, insist FPPC officials, is that voters deserve to know if someone expressing their free speech rights is getting a paycheck to do so. On the face of it, that makes some sense. But here’s the reality: self-policing by the online community, as well as current reporting requirements, has made paid non-reported blogging almost nonexistent in our state. Most blogs typically require that authors disclose their affiliation with any campaign.

But pressed, the FPPC repeatedly fails to provide more than a handful of examples of when those engaged in social media didn’t already report their activity — or tried to conceal it.

Nonetheless, the FPPC has enacted a regulation in search of a problem, one that will be unworkable and unenforceable and will result in an avalanche of unnecessary paperwork. The net will result will be less online activity, and reduced voter engagement.

(Mod: You know why this doesn't mean anything to The Tattler, right? We don't take any money. Here we can say any old thing we want and we don't have to divulge the source. Which more often than not is the lack of sleep and a bad reaction to my own cooking.)

New Poll Finds Americans View Death Of Close Relative More Favorably Than Congress (The Onion link): According to a poll released Friday by the Pew Research Center, the favorability rating of the U.S. Congress has sunk so low that the legislative body is now looked upon more negatively than the death of a close relative.

“When asked whether they would prefer to select a casket for their child or endure the forthcoming congressional showdown over the debt ceiling, 89 percent of Americans said they would rather bury their own offspring,” said Pew spokesperson Diana Shostak, adding that the figure went up to 96 percent when it was specified that the political brinksmanship could go on for weeks without a single piece of legislation ever making it to the floor for a goddamn up-or-down vote.

“Watching one’s grandmother weep uncontrollably at the impending death of her husband of 60 years, having the agonizing conversation about whether to pull the plug on his life support unit, and looking on as he gasps for his final breaths—these situations all enjoyed higher approval ratings than any individual member of the House or Senate.”

The poll also found that the prospect of suffering one’s own death by slow asphyxiation was viewed four times more favorably than anything having to do with filibusters.

(Mod: Has anybody ever done a poll of this sort in regards to government here in Sierra Madre?)

Hill prediction: Headed for shutdown (Politico link): House and Senate leadership aides in both parties are increasingly convinced the federal government will close for the first time in more than 17 years on Tuesday morning.

There is still time to avoid such a climactic stalemate, the aides acknowledged. But unless there is a dramatic change in momentum, the likelihood that a partisan showdown over government funding and the future of Obamacare could lead to a shutdown has increased dramatically.

With a special closed-door meeting meeting of House Republicans set for noon Saturday, Speaker John Boehner (R-Ohio) and his top lieutenants have not yet formulated their next play in their quest to keep the government open. It’s not even clear that the House will vote on Saturday.

There have been repeated contacts between GOP and Democratic leaders and senior aides in recent days but no negotiations of any sort – or sign those are about to start – to resolve the standoff. Both sides feel they have made their position known to the other side, and are unwilling to make any concessions at this moment.

(Mod: You know what? They should just do it. Shut the damn thing down. What the hell. The time is coming when nobody is going to want to lend us money anymore, so why wait? Federal government collapse is inevitable, so let's at least do it on our own terms. The only can we should be kicking down the road now is the one attached to whatever politician happens to be in front of us at the time.)

L.A. County workers demand higher pay, plan rally on Tuesday (Los Angeles Times link): On the verge of having their contract with Los Angeles County expire, labor organizers on Thursday urged their members to participate in a march and rally next week.

“Our purpose right now is to make sure we send a message to the media, educate the public and we tell the county what they are proposing is unacceptable,” said Norma Herrera, a worksite organizer with SEIU Local 721, which represents 55,000 county workers.

Speaking to more than 50 workers gathered at lunchtime outside the Hall of Administration in downtown Los Angeles, she said, “The most powerful part of any contract is the threat of the workforce.”

The current contract expires at midnight on Monday, and there is no chance that a new one could be ratified before the rally next Tuesday.

The county Board of Supervisors’ cancelled their weekly meeting that day, an action Herrera called “cowardly” and attributed to the labor dispute. County officials say the meeting was cancelled on Sept. 10 when supervisors realized they would not have a quorum.

The proposal on the table is similar to one accepted by several other bargaining units. It calls for workers to receive a 6% raise over 30 months. Other proposals are being debated, including raising the amount employees pay for their medical coverage.

In fliers sprinkled around the Hall of Administration urging participation in a “Day of Action,” SEIU argues that for low-wage workers, the cost of health care is greater than the raise, resulting in a pay cut.

(Mod: It was good to see these folks getting out of their offices and taking in a little sunshine for a change. Some of them obviously needed it.)

23 Pieces Of Evidence That Punk Is Dead (BuzzFeed link)

(Mod: I was going to send this to our friend Tony Brandenburg, but then I figured I'd just put it here and see if he noticed. That Justin Bieber/Black Flag t-shirt is particularly compelling. Of course, punk has been dying since just after it started. Tragedy is a part of its enduring appeal.)

You're right, I need to stop now.