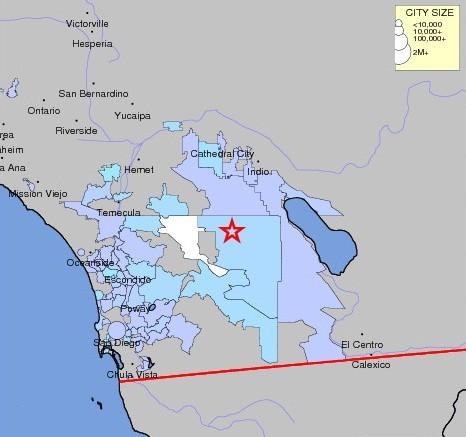 For the second day in a row, Southern Californians were rattled by earthquakes Friday morning.

After the United States Geological Survey reported a 3.9-magnitude quake in Borrego Springs after 11 p.m. Thursday, a 2.6-magnitude temblor was registered in La Verne about 2 a.m. Friday.

The quakes come after La Verne experienced a series of temblors – including two above 3.5-magnitude – just a day earlier.

More than 360 people reported feeling the Borrego Springs quake, with one person 150 miles away in Thousand Oaks feeling the shaking, according to the USGS website.

"I felt it, like a shot, quick and clean, through the house," tweeted Leann Files.
The quake was centered about 22 miles southwest of La Quinta.

More than 50 people reported feeling the La Verne quake on Friday morning, the farthest report coming from 70 miles away in Aguanga in Riverside County, according the USGS.
Borrego Springs residents also felt a 3.3-magnitude quake earlier this month.

It began with a 3.7-magnitude temblor that was soon followed by the even larger aftershock, the USGS reported.

The first quake occurred about 4:43 a.m., more than a half-mile below  Bonelli Park Trail in La Verne, according to the USGS.

“Never have I ever gotten out of bed so quickly at like 5 am, well I'm going to be on time for school!” tweeted Ashley Sibrian.

“It was pretty crazy. We felt the first one, it wasn’t too bad,” said Elizabeth Price, a shift leader at a Pomona Starbucks just down the street from the epicenter. “The aftershock was worse. It shook us pretty good, but nothing fell.”

According to the USGS website, more than 200 people reported feeling the initial 3.7-magnitude quake, with responses coming from as far away as North Hollywood.