Two Pasadena parking spaces to become 'parklets' for a day 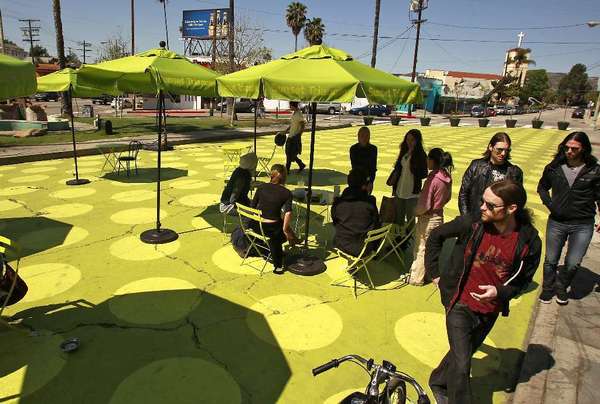 
In an attempt to cultivate a more pedestrian-friendly city, one Pasadena organization will turn two parking spaces into tiny, temporary parks Friday.

The Pasadena Playhouse District Assn., a nonprofit organization that promotes the 32-block district, will transform two 7-by-20-feet parking spaces into pocket parks from noon to 4 p.m.

The parklets will be on the north and south sides of Colorado Boulevard between El Molino and Oak Knoll, according to the organization.

The pocket parks will be installed on PARK(ing) Day, an international event in which communities turn metered parking spaces into temporary public places.

The event was started in 2005 in San Francisco, when an art and design studio laid sod and placed a bench and potted tree on a parking spot for two hours and rolled it up when the meter expired, according to the PARK(ing) Day website.

The Pasadena Playhouse District Assn. will work with Pasadena’s La Loma Landscaping and Cal Poly Pomona landscape architecture students to create the parklets. Romo said the parks will take about two hours to set up.

The parklets are being seen by the association as a “trial run” to setting up permanent parklets on Colorado Boulevard, Romo said.

The association has been talking with city officials about establishing about six pocket parks on the boulevard between Los Robles and Hudson avenues, she said.

The association plans to present ideas to the City Council, which would later vote on the parklets. They would be the first permanent parklets in Pasadena, though they would be removed each year for the Rose Parade, she said.

“Building a park is a way to enhance the pedestrian environment,” Romo said. “It’s getting a little bit of rest aspace. It’s an all-around improvement for the person who comes to shop and dine in the district.”