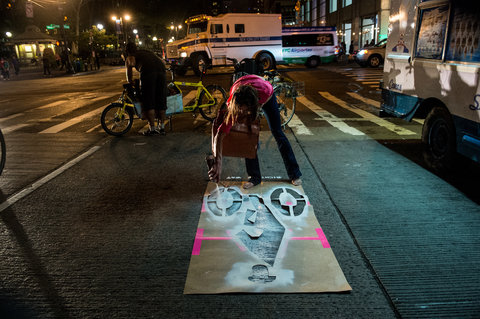 Bicycling activists including Liz Patek painted unsanctioned bike lanes along a stretch of Avenue of the Americas on Saturday evening.

As night fell on Saturday, about a half-dozen bicyclists emerged from a huddle outside the New York Public Library and began pedaling north. They rode through crowded Midtown blocks where tour buses passed slowly and tourists walked along sidewalks, carrying cameras or copies of Playbill from Broadway theaters.

The bicyclists dismounted at West 49th Street and Avenue of the Americas, where a taxicab struck a tourist from England last month, severing the young woman’s leg.

One of the cyclists used a brush to sweep grit off the roadway. Another placed stencils on the macadam. Spray paint followed, and after several minutes a line had been created marking a separate, though unsanctioned, bike lane near the curb, replete with logos of the sort used by the city and another depicting a bicyclist with wings.


“We’re doing something for the public good,” said Keegan Stephan, one of the founders of the group, called Right of Way. “So I think it’s O.K., even if it’s illegal.”

The group’s goal was to extend the bike lane on Avenue of the Americas, past its boundary at 42nd Street, to Central Park. The project was partly inspired by a lane-painting campaign that began in Colombia called Bikes4Life, said one of the participants, Liz Patek, a dancer from the Upper West Side.

The other, more immediate motivation was the accident that claimed the leg of the tourist, Sian Green. She was injured after a taxi driver, Faysal Himon, got into a dispute with a bicyclist and then accelerated onto a sidewalk, where his cab struck Ms. Green.

If a bike lane had been in place, Ms. Patek said, perhaps the collision would not have happened. 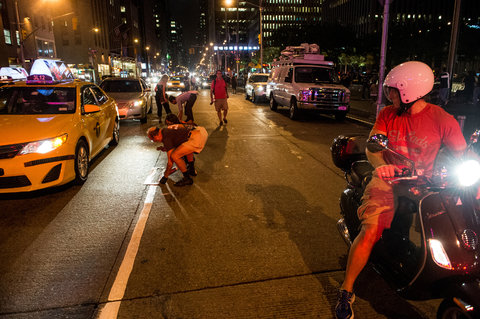 A dispute between a bicyclist and a cabby,  preceding an accident in which the driver’s cab struck a British tourist, inspired the lanes’ creation.
The city’s Transportation Department has created hundreds of miles of bike lanes in the past several years. City officials have said the lanes create a safer environment for pedestrians and motorists as well as cyclists. Seth Solomonow, a spokesman for the department, said on Sunday that the agency could not comment on whether a bike lane could have prevented the accident in August but added that the agency would consider any proposal for additional lanes supported by the local community board.

The lanes have sometimes touched off controversy. Some Brooklyn residents have unsuccessfully sought the removal of lanes along Prospect Park and Kent Avenue, in Williamsburg. And bicyclists have complained for years that many motorists drive or park in bike lanes with seeming impunity.

As the group painted the streets, several people operating pedicabs waved in thanks and began riding in the newly created lane. They were followed by a car, which smeared one of the new logos.

Over the next hour or so, the group used the stencils to create ersatz bike lanes on most of the blocks between 50th and 42nd Streets, skipping an area near 48th Street where a police vehicle was posted outside the News Corporation building.

One participant, Charles Komanoff, a transportation economist and longtime cycling advocate, described the process of painting on an active avenue as “kind of nerve-racking.”

Passers-by stopped to gaze. A security guard emerged from a bank building, lighted a cigarette and said he admired the gumption of the lane painters. Near 44th Street a visitor from Switzerland, Andreas Bertschi, said bike lanes were plentiful in his country. 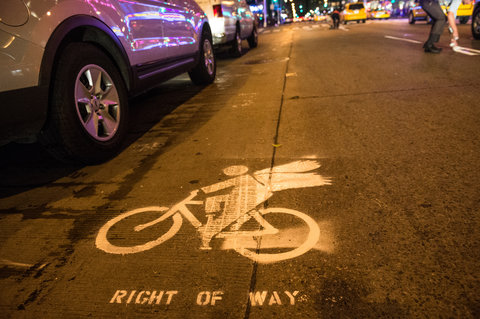 The activists’ logo was smeared by an automobile tire.
“We don’t have the problems they have,” he said as he watched Mr. Komanoff, Mr. Stephan and others bending over the stencils, spray cans in hand, as cars whizzed past.

Not everyone applauded the efforts. Near 46th Street, a driver leaned from his window and admonished the painters, intoning: “You know what you’re doing is wrong.”

Soon afterward, revolving red lights signaled the approach of a police car. The bicyclists scattered, stashing some paint cans behind a newsstand. But the police proceeded north and the bicyclists soon resumed.

The arrival of a fine mist brought an end to the project around 10 p.m. The bicyclists painted a lane opposite Radio City Music Hall, then discussed returning the next day to finish the project.

By midday Sunday, there was no sign of the group. Most motor vehicles appeared to avoid driving in the newly created lanes, but others passed over the logos. A stream of bicyclists rode in the lanes, including Kalyn Fink, a consultant from Chelsea, who was riding a Citi Bike.

Ms. Fink said that she had noticed the markings but questioned their impact, adding that she had been forced to veer around several cars that had been idling in the unofficial lanes.

“This is my first time riding in the city,” she said. “I’m just trying to stay alive.”
Newer Post Older Post Home