Your Metrolink “System-Wide” Weekend Pass May Not work on Metro. Here Is What to Do. 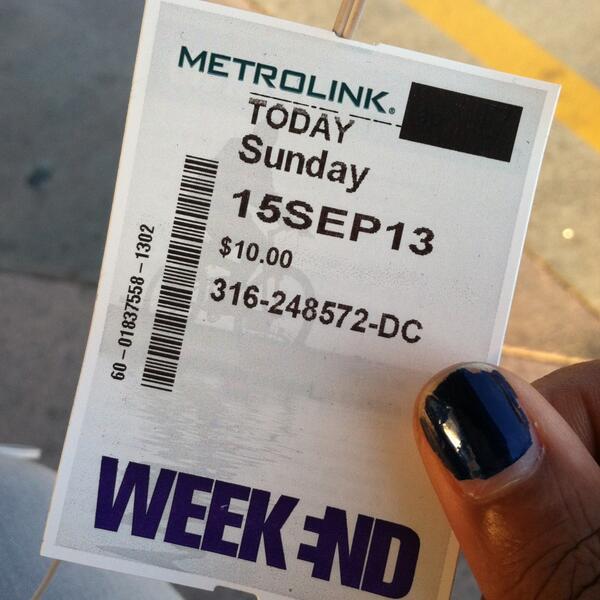 One of the best transportation bargains on offer in Southern California is the Metrolink’s Weekend Day Pass. The agency, offers a ticket on Saturdays and Sundays that allows the holder to ride anywhere on Metrolink’s service, albeit reduced from weekday offerings, for just $10.

It’s so popular that beginning two weeks ago, Metrolink began to run out of the special stock it is issues tickets on, stranding customers connecting to the Red and Purple Lines at Union Station at turnstiles that do not open. Metro does not have any staff present down in the Subway’s fare mezzanine to assist. Click on the image to see if full sized.

Like all Metrolink tickets and passes, this one also includes a free transfer to “most connecting transit.” In the past year, as what I refer to as “Metro’s Turnstile Fetish” finally came to a climax. Dates were set for gate latching. Rather than ripping out and returning the turnstiles which had sat in free-spin mode for close to four years, a solution was found to allow Metrolink passengers to retain their long-held right to freely transfer, and be able to open the “latched” turnstiles now found at all the Subway (Red/Purple Line) stations.

This came in the form of a Radio-Frequency Identification (RFID) chip, compatible with Metro’s TAP fare system, which was imbedded in each Metrolink ticket that had as its destination Los Angeles County.

But, with recent changes to their fare structure, Metrolink has begun to run out of ticket stock with the embedded chip and persons buying Weekend Passes. This has led to Ticket Vending Machines (TVMs) dispensing tickets that do not have the ability to open the turnstiles at any of the Subway stations, even though those TVMs do not ask which county the purchaser intends to travel to when the Weekend Day Pass is purchased.

Because there is no guidance on either Metrolink’s or Metro’s websites on this matter, and my e-mails to Metrolink’s Director of Public Affairs were not returned, if you get one of these tickets, as shown above, you will need to speak to Metrolink Customer Service Personnel at Union Station who will assist you with obtaining fare media that can open the turnstiles.

This may take a bit of time, for in my experience, these individuals roam the platforms and the station tunnels and are not necessarily in one spot at all times. And the Metrolink Customer Service Windows located at both ends of the station have not been open on weekends.


Also, these usually teal-shirted Customer Service are not to be confused with either the on-train staff or the numerous private security guards Metrolink has employed in a Quixotic quest to reduce their already extremely low fare evasion rate of 4%. You can also try your luck at the newly-installed hands-free intercoms, but my sources say that the agents staffing these were still unaware of the issue last weekend, and were unwilling to assist.

So allow sometime to make your transfer to the Subway if you end up with one of the un-chipped Weekend Day Passes.

And do note from the photos above that both the “TAP” and the “EZ-Pass” logos appear to be overprinted on the ticket itself; do not be surprised if an overzealous bus operator or inspector on the Light-Rail lines initially refuses to honor them.

How this all came to be is a story in itself for another blog post, but I wanted to give Streetsblog readers the heads up on this situation before the weekend.
Newer Post Older Post Home