A Democrat who's pushing to outlaw transit strikes 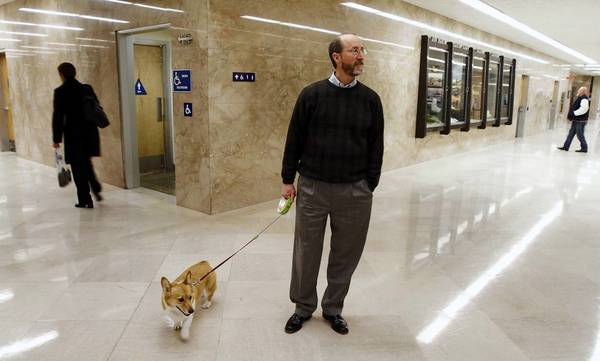 Steve Glazer walks Gov. Jerry Brown's Corgi, Sutter, through the halls of the Capitol in 2011, when Glazer was working as a strategist for Brown.


Steve Glazer may represent the California Legislature's wave of the future. Then again, he may just crash on the rocks.

Glazer is a moderate Democrat running for the Assembly while bucking powerful organized labor.

That just is not done in California for the most part, at least successfully.

A "Jerry Brown Democrat," he calls himself with some credibility. Not only was Glazer the governor's chief strategist during his lopsided election victory in 2010, he also espouses fiscal restraint like Brown.

Lately, Glazer, 56, a veteran political consultant and Orinda City Council member, has been calling out unions by advocating that the Legislature ban transit strikes.

That's a salient issue in his suburban East San Francisco Bay district, where rail commuters have just been tormented for the second time since July with a four-day strike by Bay Area Rapid Transit workers. Roughly 400,000 people ride BART daily.

The strike ended Monday night, but another is being threatened by bus drivers for Alameda-Contra Costa Transit District.

"Another strike in the Bay Area is the last thing we need," Brown said as he sought a 60-day cooling-off period Wednesday.

Brown, gearing up to run for reelection next year and counting on heavy labor support, isn't going as far as Glazer in calling directly for a ban on transit strikes. But when the Legislature was in session, he did take a stab behind the scenes at pursuing binding arbitration in the BART dispute, and thus avoiding a strike.

But Glazer has been outspoken, visiting BART stations — five are in his district alone — and asking commuters to sign his online petition urging the Legislature to ban transit strikes.

"Transit is an essential public service, just like police and fire," he says, noting that cops and firefighters are forbidden to strike in California.

"Business requires a workforce. Regional economies are dependent on allowing people to get to where they need…. When BART stops, it drives everyone onto the highways, putting more smog into the air. It takes people hours to go from the East Bay into the city" of San Francisco.

Los Angeles commuters also have been harassed by transit strikes lasting more than a month in 2000 and 2003.

Glazer notes that New York City, Chicago and Washington, D.C., have banned transit strikes. In fact, so has San Francisco. "These are public services owned by the public," he says.

He's the only Bay Area Democrat, Glazer says, who's advocating a ban on transit strikes.
But another one indicated Wednesday that he's getting close.

Sen. Mark DeSaulnier (D-Concord) — a candidate to replace the termed-out Darrell Steinberg (D-Sacramento) as Senate leader — asserted in a prepared statement that the BART strike "was devastating for commuters throughout the Bay Area. The current system failed…. This must not happen again."

The senator announced that the transportation committee he chairs will study "how other metropolitan areas around the nation avoid this kind of situation" and "will pursue every possible remedy to ensure this never happens again."

"It's hard to find Democrats [in Sacramento] who will go against labor," Glazer told me. "Democrats are in labor's pocket."

It's a huge barrier to major regulatory, public pension and education reforms.

Glazer first earned labor's wrath when he worked for the state Chamber of Commerce last year helping to elect pro-business legislators. He advised two victorious Democratic moderates — Assemblymen Richard Bloom of Santa Monica and Marc Levine of San Rafael — on how to knock off two labor- and party-backed incumbents. The losers essentially were depicted as union stooges.

The labor federation retaliated in July by blackballing Glazer, slapping him on its "do not hire" list.
"He certainly doesn't help his position any" by preaching a ban on transit strikes, Smith says.

Glazer's chief opponent for the Assembly seems to be Democrat Tim Sbranti, a Dublin city councilman and political leader of the California Teachers Assn. He's endorsed by local Democratic politicians. The Republican candidate so far is attorney Catharine Baker, a social moderate who supports abortion rights and same-sex marriage. The district leans Democratic.

This will be an important test of two new election reforms: the open primary, which advances the top two vote getters to the general election, regardless of party, and neutrally drawn districts. Reform backers contended the new system would lead to the election of more moderate, pragmatic lawmakers willing to compromise.

"The question is whether a legislative center can grow and take hold — diminishing the power of the tea party on the right and labor on the left," Glazer says.

Meanwhile, he's on the right track trying to ban transit strikes, even if labor is trying to derail him.
Newer Post Older Post Home