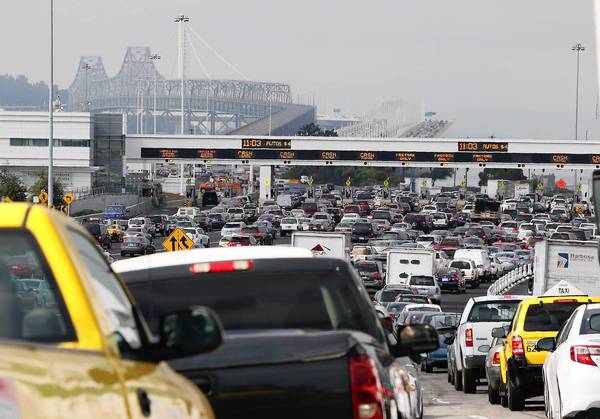 Traffic backs up on Interstate 80 in Oakland at the San Francisco-Oakland Bay Bridge as the Bay Area Rapid Transit strike snarls the Monday morning commute.


SAN FRANCISCO — BART management and union leaders emerged from negotiations late Monday to announce an end to the four-day regional rail strike that sent hundreds of thousands of commuters scrambling to find alternatives to the 104-mile system.

The strike by Bay Area Rapid Transit's two largest unions stung its weekday ridership of 400,000 more sharply Monday than it had Friday, as residents who had taken a long weekend or worked from home scrambled for buses, ferries and carpools — or sat for hours in gridlocked traffic.

The settlement, announced about 10 p.m., would get some trains running by 6 a.m. and would ramp the system up to full strength for the afternoon commute, said BART General Manager Grace Crunican.

"This offer is more than we wanted to pay, but it's also a new path in terms of relations with our unions," said Crunican, who declined to reveal details before union leaders shared them with membership. "We compromised to get to this place, as did our union members."

Union members must still vote to ratify it and the BART board must approve it. Leadership praised it as a win for workers' rights.

Oakland Mayor Jean Quan had joined the bargaining teams in the Metropolitan Transportation Commission offices in her city to urge a prompt end to the strike. Lt. Gov. Gavin Newsom was there too.

"If there's any lesson learned, it's that this can never happen again," Newsom said.

Monday night's unexpected resolution came hours after federal investigators disclosed that an out-of-service train that killed two BART workers on the tracks Saturday was being driven by an "operator trainee."

Christopher Sheppard, 58, of Hayward and Laurence Daniels, 66, of Fair Oaks were struck and killed by a BART train as they inspected a dip in the tracks between Walnut Creek and Pleasant Hill.
The tragedy seemed to add a new layer of urgency onto the stalled negotiations.

James Southworth, lead investigator for the National Transportation Safety Board, confirmed in a Monday briefing that one of two "operator trainees" aboard the train was at the controls. BART had been training some managers as operators so they could run skeletal commuter service in the event of a prolonged strike — a practice unions had opposed, calling it unsafe.

Southworth said six people were aboard the train, which was on a maintenance and training run. The operator was informed by radio that the men were on the tracks and he sounded the train's air horn, Southworth said, but he was unable to stop in time. The train was traveling between 60 and 70 miles per hour.

Investigators will conduct a reenactment to study the train's braking system, he added.
"He was aware of people on the tracks," Southworth said of the driver, who was among four employees interviewed for as long as 10 hours Monday.

NTSB investigators were shipping the train's video recordings to Washington, D.C., and planned to continue with interviews Tuesday, he said.

The BART strike is the second to hamper travel and commerce in the region since July, when a 4 1/2-day walkout was brought to a close by the intervention of Gov. Jerry Brown, who later called for a 60-day cooling-off period.

The cooling-off period ended Oct. 10 and was followed by a nail-biting series of strike deadlines that came and went last week. Federal mediators flew in from Washington to press for resolution and by all accounts brought the sides much closer together. But negotiations nevertheless crumbled Thursday, and the strike was called.

The two sides agreed on pension and healthcare contributions and came close on salary. But other issues, which included the length of the workday and the amount of input workers have over changes in procedure, thwarted a deal. Safety concerns over tunnel lighting, track clearing and track signage were also among unresolved issues.

Federal mediator Greg Lim remained in the Bay Area after his colleagues returned home, however, and by Monday afternoon management and union representatives confirmed that negotiations had resumed with his involvement. Both sides said that they were "hopeful" and that the gap between the parties was narrowing.

Commuters found new ways to get to work, with varying degrees of frustration and good-natured adventurism.

Free BART round-trip shuttles running from seven of nine East Bay stations were filled by 7:35 a.m. Packed buses from the Alameda-Contra Costa Transit District — which is having its own labor discord — picked up some of the slack, loading thousands of additional passengers for standing-room-only express trips to San Francisco.

San Francisco Bay Ferry reported three times the passenger volume of a regular Monday. People seeking to board at Oakland's Jack London Square were greeted with long lines that moved remarkably fast, thanks to extra vessels placed into service by Golden Gate Ferry.

Kim Walker, 56, a nurse at a school-based health center in San Francisco's Potrero Hill neighborhood, was among tens of thousands of workers unable to telecommute. On Monday, the Oakland resident rose early, hopped on her bike and was in the ferry line by 8 a.m. reading a book.

"It's really a nice wonderful way to commute, on the bike and on the water," Walker said. "It just takes a long time."

Although the ferry crossing is more expensive than using BART, the boats make for a luxurious ride to San Francisco's iconic Ferry Building — with coffee, beer, wine and a full snack bar on board.
"There's no bar on BART," Matthew Meidinger, 33, of Berkeley said with a mix of cheer and sarcasm. The restaurant manager had walked right onto the ferry and grabbed a seat only 15 minutes or so after arriving at the Jack London Square terminal — a big improvement over the delays during BART's strike in July, he said.

Still, "the whole thing's a pain," he said, noting that Monday was his son's first birthday and instead of being able to pop into the city for a few brief meetings, transit issues would cost him the day.
San Francisco owes a hefty piece of its economic heart to its tourists. Jon Ballesteros, vice president of public policy for the San Francisco Travel Assn., said the industry — including hotels, restaurants, retail outlets and attractions — supports 74,000 jobs in town. For a number of those people, "it's been difficult to get in."

A Chipotle restaurant in the financial district that normally has a lunch crowd spilling out the door was at light capacity at midday, and manager Cory Shiflett said a number of workers had arrived "two hours late."

Ballesteros said San Francisco International Airport had taken strong measures to ensure that travelers knew how to get to their destinations. However, there were glitches.

Phoenix residents Gracie Snyder, 36, and her husband, Brian, 37, found a shuttle to take them to Union Square when they arrived Saturday, but they described the hunt as "difficult" and the price as steep. On Monday they found themselves sitting in a long line for a bus in San Francisco for an excursion to Pixar Animation Studios in Emeryville.