CH2M Hill and the LAX Runway

Peggy Drouet: While the City of Los Angeles sues CH2M Hill for construction defects over shoddy work on a Los Angeles International Airport runway, the Los Angeles County METRO has been expressing complete confidence in the Environmental Impact Report being conducted by CH2M Hill for the so-called 710 Gap, including their study of two proposed 710 tunnels, each 4 1/2 miles long, that will transverse four earthquake faults and two aquifers and also run under many very old houses with basements that were built before any earthquake building codes were in effect, potentially being damaged by the tremors caused by the tunneling machine. Should we have confidence in the technical studies being conducted by CH2M Hill? I think all the conclusions that they arrive at concerning the tunnel, traffic studies, air pollution, etc., need to be carefully restudied by experts in every field that they had touched in their EIR to prevent a potential disaster in the future.

The city has filed suit against companies responsible for building the 6-year-old runway, saying the concrete is cracked and steel bars are exposed. 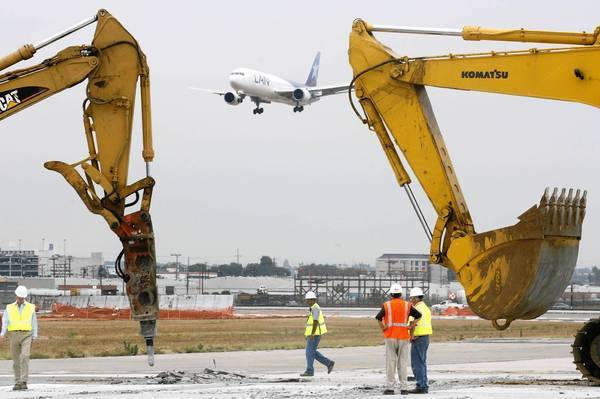 A plane comes in for a landing as AX's southernmost runway is demolished during a relocation project in 2006.A lawsuit has been filed over the quality of the work on the runway.

A $250-million runway at Los Angeles International Airport, rebuilt six years ago, is riddled with construction defects, including cracks, exposed steel reinforcing bars and deteriorating concrete, according to city officials.

The mounting problems, including the runway's failure to meet Federal Aviation Administration construction standards, could disrupt future flight operations at the nation's third-busiest airport, according to a city lawsuit filed against companies responsible for the work.

The city says it will be forced to prematurely reconstruct the 21/2 miles of pavement, a potentially complex and disruptive undertaking that would require rerouting air traffic to other runways. Typically, a commercial runway has a life span of 20 to 25 years.

Located on the south side of the airport complex near El Segundo, the runway continues to be used for takeoffs and landings. LAX officials said Thursday it poses no immediate danger.

"Maintenance, engineering and airport operations staffs will continue to monitor the condition of the runway to ensure it remains safe for aircraft operations," said Nancy Castles, an airport spokeswoman. FAA officials said they also were monitoring the condition of the runway, known as 25 Left, which handles up to 500 arrivals and departures a day.

In the lawsuit filed last week in state court, the city attorney's office alleged the runway "is unfit for its intended purpose and the city will incur ongoing consequential property damage and economic losses as a result of the deficiencies."

Some pieces of concrete have flaked or broken off, according to the lawsuit. One LAX source familiar with flight operations, who requested anonymity because he was not authorized to discuss the matter, said he has noticed unusual amounts of debris being stirred up on the runway by landing aircraft.

Jon Russell, a safety expert with the nation's Air Line Pilots Assn., expressed concern that material from the runway, should it continue to deteriorate, might break loose and be sucked into a plane's jet engine, causing serious damage.

Public works contracting executive Ron Tutor, who headed the Tutor-Saliba construction firm that performed part of the runway work, now leads the firm Tutor-Perini, which was recently hired to construct the first Central Valley section of track for the California high-speed rail project. Brosamer, a highway builder, is now part of Walsh Construction.

Officials with the Tutor and Walsh firms could not be reached for comment. HNTB, which provided consulting and engineering services, and CH2M Hill, the project's construction manager, said they do not discuss pending litigation.

Officials for Los Angeles World Airports also declined to elaborate on the allegations in the lawsuit. However, airport Commissioner Jackie Goldberg, a former state assemblywoman and onetime Los Angeles City Council member, said she hoped the lawsuit could be settled relatively quickly. The city is seeking unspecified damages, attorneys' fees and costs of litigation.

The runway opened in April 2007, part of a $338-million package of safety enhancements that included a new south area taxiway to help reduce runway incursions by planes moving about on the ground. From 2000 to 2003, LAX reported the highest number of incursions in the nation.

To make room for the taxiway, the south runway was demolished and rebuilt 55 feet closer to El Segundo. About $108 million in FAA grants helped pay for the project.

In addition to improving safety, airport officials said the reconfigured layout would allow LAX to better handle the next generation of large aircraft, such as the giant Airbus A380.

The lawsuit alleges that construction and concrete defects also are present in other parts of the south airport complex, including improvements to the runway overpass at the Sepulveda Boulevard Tunnel.
City attorneys contend the concrete mixtures did not meet contract specifications or conform to acceptable methods for placing and finishing concrete. Typically, concrete is inspected, sampled and tested throughout the construction process to ensure that mixtures are correct and dry properly.

The runway lawsuit is not the first time Tutor-Saliba has been embroiled in an airport controversy. In 2003, Los Angeles World Airports threatened to remove the firm from a $34-million FlyAway bus project in Van Nuys, saying that the company failed to fix defects found by city inspectors in a five-story parking garage. FlyAway buses shuttle passengers from various locations to LAX.

The company has handled numerous projects successfully but also has been accused of fraud and shoddy workmanship related to the Los Angeles subway, San Francisco International Airport and public works projects in New York. Those matters have cost the builder tens of millions of dollars in legal judgments, settlements and penalties.
Newer Post Older Post Home