Organizers of Sunday’s CicLAvia festival estimated that more than 100,000 people turned out to bike, walk, run and roller-skate along 7 ½ miles of downtown streets that were closed to cars for the event.

No major incidents or injuries were reported, though because of temperatures reaching the low 90s and because of low humidity, organizers had to remind people to drink plenty of water and stay hydrated.

Sunday’s car-free event, dubbed Heart of LA, was the third this year and the eighth since CicLAvia began in 2010 in downtown Los Angeles. The aim is to get Angelenos to abandon their vehicles for the day and rediscover their city in other ways.

“We came back to where we started it all,” said Robert Gard, a CicLAvia spokesman. “People seemed to really like coming back to these streets downtown that they now know and love."

Organizers are still finalizing plans for 2014, but Gard said they hoped to put on four throughout the year, with the first in April along Wilshire Boulevard.

Although CicLAvia is best known as an attraction for cyclists, Gard said it has become increasingly popular for those on foot.

“More and more people are seeing it as a pedestrian event and taking advantage of that," he said. “We still had tens of thousands of bicycles out there, but we saw people embracing it as both a pedestrian and a cycling event.”


For some, CicLAvia is a family event 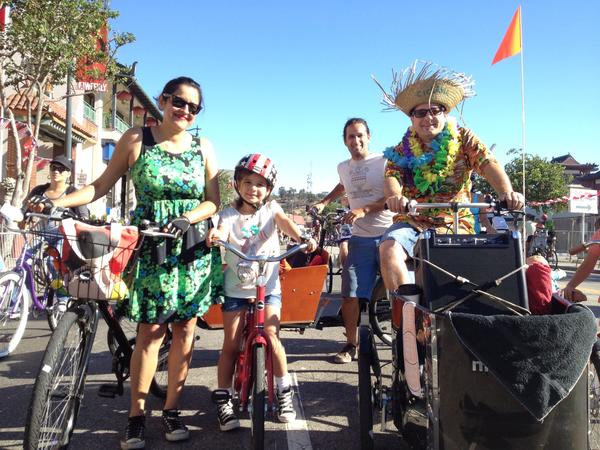 The Lutz family participates in the eighth edition of CicLAvia.

Walter Lutz, 41, bopped his head as he weaved in and out of traffic lanes Sunday in Chinatown. His 7-year-old daughter, Scarlette, giggled as she biked behind her father. Bright-colored leis dangled from Lutz's neck, complementing his luminous Hawaiian shirt with sunset and palm trees.
The word "CicLAvia" was painted across Lutz's straw hat.

"Each year, I try to do something different," Lutz said of participating in the bike festival. "I've walked and skateboarded" before.

His cargo bike toted a large music speaker that would be replaced with Scarlette's bike once she tired of riding. For now, the music of reggae artist Jimmy Cliff's "Blessed Love" could be heard by all.
Lutz's wife, Cris, said she tries to ride when she can. On the other hand, Walter commutes to work by bike. He said he's been biking all his life and CicLAvia gives him a chance to cruise with thousands of others.

"It's a fun party," Lutz said about the event. "Just being out on bikes and car free."

Organizers said more than 100,000 people were expected to participate in the eighth edition of CicLAvia, which is intended to get Angelenos to abandon their cars and rediscover their city on bicycles, skateboards, inline skates or on foot.

The event runs until 4 p.m. and covers roughly 7.5 miles of city streets in and around downtown.
Los Angeles held its first CicLAvia in October 2010 and has become increasingly popular. The idea of booting cars off the roads for pedestrians and cyclists was borrowed from Colombia, which began its weekly Ciclovía more than 30 years ago.

The event is intended to promote health and community, while raising awareness about pollution and alternate modes of transportation.
Newer Post Older Post Home