Months before the L.A. streetcar project's additional expenses became public, City Hall staff members quietly warned the cost estimate was not detailed and could rise, a Times review has found.

Posted on NO 710 Freeway Tunnel Facebok page:
Interesting parallels between this story and the saga of the F-7 alternative. The initial estimates were done based on cost of a similar project in Oregon. For the F-7x tunnels, the cost estimates are based on Seattle's Alaskan Way Viaduct Replacement Tunnel. For the Los Angeles streetcar, the company that underestimated the cost of moving utilities by a factor of 20(!!!) -- HDR -- recently purchased and absorbed InfraConsult LLC, the company that is responsible for all the financial analysis for Metro's PPP program and responsible for the projections of toll revenues and profitability of the F-7x tunnels. Pay close attention to this quote: Henry Koffman, a construction management professor at USC, said public works projects often feel pressure to keep early cost estimates low. "If you aim high at the start, it's more likely the project will be torpedoed," he said, adding there is a better chance that requests for more money will be granted once a project is underway. 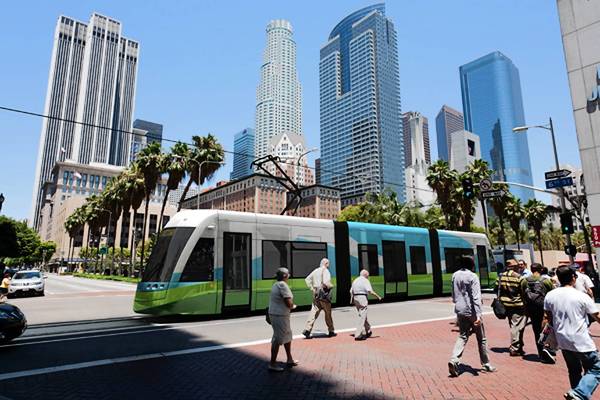 Officials recently announced that cost estimates to bring back the L.A. streetcar have more than doubled, to as much as $327.8 million. Earlier budgets had not accurately accounted for inflation or the potentially high cost of relocating utilities. Above, an artist's rendering of the streetcar. (July 20, 2012)

When downtown voters agreed last winter to bring back the Los Angeles streetcar, the campaign pitch sounded simple: a $125-million trolley through the heart of the central city, with funding split between federal grants and a new property tax.

Inside City Hall, however, staff members had been quietly warning that the project's price tag was not a detailed estimate and could rise, a Times review of city memos, emails and meeting notes has found.

Records also show that aides to City Councilman Jose Huizar were reluctant to incorporate higher estimates into public discussions, partly because of concerns they could slow the streetcar's progress.

The red flags proved accurate. Officials recently announced that cost estimates have more than doubled, to as much as $327.8 million. Earlier budgets had not accurately accounted for inflation or the potentially high cost of relocating utilities. The route probably will be shortened, no longer passing by two high-profile venues, the Walt Disney Concert Hall and the Dorothy Chandler Pavilion.

With no clear way to close what could be a $200-million funding gap, the fear now at City Hall is that the streetcar's shot at a crucial federal grant is in jeopardy, potentially delaying construction by several years.

The bumpy saga of L.A.'s modern-day streetcar may yet end with a sleek new transit loop. But records and interviews shed a fresh light on the technical and financial problems that have dogged the project, largely out of public view, in the months before news of the additional costs was shared with taxpayers.

"We thought it was too early to go with any kind of number," Huizar's chief of staff, Paul Habib, said of the reluctance to make public the higher potential cost. Not enough engineering work had been done, he said, to move beyond a "guesstimate."

The push for a trolley began in 2006 when L.A.'s then-Community Redevelopment Agency published a study supporting a partial resurrection of the streetcar network that once spanned Southern California.

Armed with $10 million in seed money from the CRA, a group of downtown business leaders in 2009 formed a nonprofit, Los Angeles Streetcar Inc., to spearhead the project. Many hoped it would accelerate the area's nascent renaissance.

A price tag — $100 million to $125 million — appeared. But it was a "back-of-the-envelope" figure, Huizar aide Jessica Wethington McLean recently acknowledged, based on the cost-per-mile of the Portland, Ore., streetcar, with no allowance for inflation. The 7.2-mile Portland streetcar opened over five phases from 2001 to 2012 and cost a reported $251.45 million.

"It's really that simple," Eric Metz, the nonprofit's project director, explained to city staff in one email. "We didn't hire an engineer or anything that fancy."

New cost estimates were produced in early 2012 by HDR Inc., a global engineering consultant. The four-mile route ultimately selected was to start at 1st Street, run 11 blocks south along Broadway before veering west to the LA Live entertainment zone and north through the Financial District. Including $19 million to cover any unexpected costs, the new construction cost estimate came to roughly $125 million, city staff said.

Then, during a round of deep budget cuts, Gov. Jerry Brown dissolved California's redevelopment agencies, killing what nonprofit officials said had been one of their biggest political champions at City Hall.

During the "gray period" after the CRA dissolved, the city's Transportation Department began preparing to take the lead on the project, spokesman Jonathan Hui said. Soon, transportation staff members were voicing concerns about the $125-million estimate, noting it did not account for inflation or utility relocation — often two of the biggest costs of Southern California construction projects.

"Do not know what is under the street," James Lefton, the department's executive officer of transit services, noted on a legal pad during a July 2012 meeting. "Could add significantly to cost overruns."

The missing costs were not publicized as downtown residents prepared to vote on whether to create a property tax district to raise about $62.5 million. In December of that year, the tax measure won with 72.9% of the vote.

The department did not publicly discuss its concerns, Hui said, because it did not become the lead agency on the project until after the election. Pointing out issues would have been difficult, staff members said, without a better estimate to use as a point of comparison.

Henry Koffman, a construction management professor at USC, said public works projects often feel pressure to keep early cost estimates low. "If you aim high at the start, it's more likely the project will be torpedoed," he said, adding there is a better chance that requests for more money will be granted once a project is underway.

HDR's new estimate came in at the beginning of this summer. Earlier budgets had allotted about $10 million for utility costs. The new figure would need 20 times that.

"Did I add this correctly?" one legislative analyst wrote in an email.

Beneath Broadway lies a tightly packed tangle of power lines and century-old pipes. Moving or replacing them would be very expensive. Similar issues have plagued other cities, including Cincinnati, where a streetcar project's cost overruns have become a key issue in the mayor's race.
Staff members who spoke on the condition of anonymity said examining the project budget and revealing the shortfall had been politically awkward. Huizar's staff wanted to enter the federal funding process quickly, without disclosing the shortfall, emails indicate.

Huizar's staff said they did not have enough confidence in the new estimate to discuss it publicly. The estimates are a worst-case scenario, Wethington McLean said, and she expects them to come down as engineers find ways to cut costs, such as moving segments of track to dodge certain utility lines.
A spokesman for City Atty. Mike Feuer said he could not speculate whether the cost increase would pose problems for the downtown tax district that voters approved at a lower estimated cost.

The next cost estimate is expected in January. If the price veers above $250 million, officials say, the streetcar project will be bumped to a different funding category, pitting the first large-scale project shepherded by L.A.'s city transportation department — rather than the county's transit agency — against much more expensive and sophisticated proposals across the country.

Without a federal grant, the budget shortfall could rise to nearly $275 million. The money from downtown property taxes cannot be collected until federal funding is awarded.

In the meantime, Huizar staff members said they would pursue other grants, or possibly a private partner, to cover the costs. However, transit systems don't usually make a profit, experts say, which makes them less appealing to the private sector.

The project has missed the Sept. 30 deadline for consideration in next year's federal budget. Some in City Hall believe the streetcar will not be done until mid-2019, five years later than originally promised.