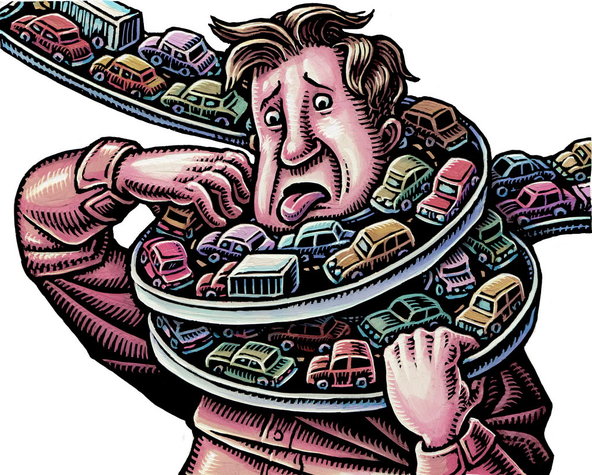 My twin grandsons, now 13, walk nearly a mile to and from school and play basketball in the schoolyard for an hour or more most afternoons, when weather and music lessons permit.

The boys, like their father, are lean, strong and healthy. Their parents chose to live in New York, where their legs and public transit enable them to go from place to place efficiently, at low cost and with little stress (usually). They own a car but use it almost exclusively for vacations.

“Green” commuting is a priority in my family. I use a bicycle for most shopping and errands in the neighborhood, and I just bought my grandsons new bicycles for their trips to and from soccer games, accompanied by their cycling father.

My son used to work in New Jersey, which entailed a hated commute by car that took 50 to 90 minutes each way. He quit that job when his sons were born and, working part-time from home, cared for the boys. He now commutes to work in the city by foot and by subway, giving him time to read for pleasure.

As you’ll soon see, the change has probably been good for his health, too.

According to the Census Bureau, more than three-fourths of all commuters drove to work in single-occupancy vehicles in 2009. Only 5 percent used public transportation, and 2.9 percent walked to work. A mere 0.6 percent rode bicycles, although cycling has finally begun to rise in popularity as cities like New York create bike lanes and bike share programs.

But workers are not the only ones driving for hours a day. The mid-20th century suburban idyll of children going out to play with friends in backyards and on safe streets has yielded to a new reality: play dates, lessons and organized activities to which they must be driven and watched over by adults.
In “My Car Knows the Way to Gymnastics,” an aptly titled chapter in Leigh Gallagher’s prophetic new book, “The End of the Suburbs,” she describes a stay-at-home mom in Massachusetts who drives more than her commuting husband — 40 to 50 miles each weekday, “just to get herself and her children around each day.”

Millions of Americans like her pay dearly for their dependence on automobiles, losing hours a day that would be better spent exercising, socializing with family and friends, preparing home-cooked meals or simply getting enough sleep. The resulting costs to both physical and mental health are hardly trivial.

Suburban sprawl “has taken a huge toll on our health,” wrote Ms. Gallagher, an editor at Fortune magazine. “Research has been piling up that establishes a link between the spread of sprawl and the rise of obesity in our country. Researchers have also found that people get less exercise as the distances among where we live, work, shop and socialize increase.

“In places where people walk more, obesity rates are much lower,” she noted. “New Yorkers, perhaps the ultimate walkers, weigh six or seven pounds less on average than suburban Americans.”

A recent study of 4,297 Texans compared their health with the distances they commuted to and from work.It showed that as these distances increased, physical activity and cardiovascular fitness dropped, and blood pressure, body weight, waist circumference and metabolic risks rose.

The report, published last year in The American Journal of Preventive Medicine by Christine M. Hoehner and colleagues from the Washington University School of Medicine in St. Louis and the Cooper Institute in Dallas, provided causal evidence for earlier findings that linked the time spent driving to an increased risk of cardiovascular death. The study examined the effects of a lengthy commute on health over the course of seven years. It revealed that driving more than 10 miles one way, to and from work, five days a week was associated with an increased risk of developing high blood sugar and high cholesterol. The researchers also linked long driving commutes to a greater risk of depression, anxiety and social isolation, all of which can impair the quality and length of life.

A Swedish study has confirmed the international reach of these effects. Erika Sandow, a social geographer at Umea University, found that people who commuted more than 30 miles a day were more likely to have high blood pressure, stress and heart disease. In a second study, Dr. Sandow found that women who lived more than 31 miles from work tended to die sooner than those who lived closer to their jobs. Regardless of how one gets to work, having a job far from home can undermine health. Another Swedish study, directed by Erik Hansson of Lund University, surveyed more than 21,000 people ages 18 to 65 and found that the longer they commuted by car, subway or bus, the more health complaints they had. Lengthy commutes were associated with greater degrees of exhaustion, stress, lack of sleep and days missed from work.

Back in the United States, a study of those who commute to work via the Long Island Rail Road linked long commutes with fewer hours of sleep and greater daytime sleepiness.

In her book, Ms. Gallagher happily recounts some important countervailing trends: more young families are electing to live in cities; fewer 17-year-olds are getting driver’s licenses; people are driving fewer miles; and bike sharing is on the rise. More homes and communities are being planned or reconfigured to shorten commutes, reduce car dependence and facilitate positive interactions with other people.

While there is still a long way to go before the majority of Americans live in communities that foster good health, more urban planners are now doing health-impact assessments and working closely with architects, with the aim of designing healthier communities less dependent on motorized vehicles for transportation.
Newer Post Older Post Home