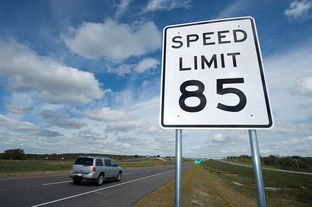 Speed limit on the new portion of SH130 will be 85MPH as the opening ceremonies for the final southern portion of SH130 toll road from Georgetown, TX north of Austin to Seguin near San Antonio.

A year ago this week, a toll road opened in Central Texas that represented two milestones for the state. While its posted 85 mph speed limit — the highest in the country — drew international headlines, many state and local leaders were more interested in the road’s unique financing: A private consortium designed and built the road and agreed to operate and maintain it for 50 years in exchange for a cut of the toll revenue.

“This stretch of road holds a special place in our history,” Gov. Rick Perry said at the ribbon-cutting for the 41-mile southern portion of State Highway 130. “This is the first road built via a public-private partnership.”

But SH 130 has not been the immediate success story its backers had hoped. Last week, lower-than-expected traffic revenue prompted credit ratings firm Moody's Investors Service to severely downgrade the SH 130 Concession Company’s debt and warned that a default may not be far off. The project’s stumbles are likely to draw increased scrutiny of how Texas plans to fund future infrastructure projects, though local and state officials are working to distinguish SH 130 from other toll projects in the works.

Moody’s downgraded $1.1 billion of debt tied to the project by five notches, from B1 to Caa3, considered junk status. It’s the second time the firm has downgraded the project’s debt, following an earlier downgrade in April.


The threat of a default could prompt the SH 130 Concession Company, a partnership between Spain-based Cintra and San Antonio-based Zachry American Infrastructure, to refinance its debt next year or inject additional money into the project. TxDOT could view an ongoing cash-flow problem as reason to terminate its toll contract with the company decades ahead of schedule, according to Moody’s.

SH 130 Concession Company spokesman Chris Lippincott said in a statement that the consortium remains committed to the project but did not dispute Moody’s assessment of its finances.
“We are meeting our contractual obligations to operate and maintain a world-class highway,” Lippincott said. “We remain confident that the recently-opened SH 130 Segments 5 and 6 will benefit our investors and the people of Texas."

The consortium spent $1.3 billion to build the southern portion of SH 130, known as Segments 5 and 6. Combined with the publicly funded northern portion (Segments 1-4), SH 130 connects Georgetown to Seguin, providing a 90-mile bypass around San Antonio and Austin. TxDOT officials have expressed hope that the road would someday serve as a popular alternative to congested Interstate 35 for those driving through Central Texas. Backers, noting the 50-year contract with TxDOT, also predict that future development in Lockhart and other small towns along the toll road’s route would lead to increased traffic in the future.

But the road’s location — about 30 miles east of the most congested portions of Central Texas — was viewed as a challenge from the start. Most other toll projects around the state are similar to the MoPac Express in Austin, which is adding toll lanes to the median of a congested highway. At last week’s ceremony to celebrate the start of construction, Capital Area Metropolitan Planning Organization chairman Will Conley said the project’s location distinguishes it from SH 130.
“I think this project is fundamentally different,” Conley said. “[SH] 130, of course, is a greenfield project and, I think, more of a longer-term-type project. Whereas, the day this opens, this is going to impact an immediate need on MoPac.”

At a Texas Tribune symposium on transportation last week in Dallas, Texas Transportation Commissioner Ted Houghton stressed that the construction of Segments 5 and 6 of SH 130 was a bet made entirely by private investors, going so far as to dispute the notion that the project should be considered a "public-private partnership," despite other state officials having used the label.
"I consider it a private, not a public-private," Houghton said. "There is no public money in that road, on [Segments] 5 and 6."


TxDOT purposely “transferred the risk” for the project, Houghton said, rather than invest the $700 million that would have been needed to build the toll road with public funding. He compared the private portion of SH 130 to the Grand Parkway, a publicly financed 180-mile tolled loop around the Houston area aimed at easing traffic in that region. Earlier this year, the state launched a $2.9 billion bond sale to fund the project.

“That’s ours. [SH] 130 is somebody else’s,” Houghton said. “We think the Grand Parkway is a wonderful asset to hold on to. We knew that 130 was tough, and somebody else said, ‘We’ll take that risk.’”

Despite the private funding behind SH 130, TxDOT has invested public resources in promoting the toll road. The agency recently helped pay to put nearly 400 signs along the I-35 corridor promoting SH 130 as an alternative route. TxDOT has also subsidized trucks to use the road at a discounted rate. Lippincott expressed hope that the truck discount could be extended past its current March expiration.

“It’s a good choice for truckers, and anything that gets trucks off I-35 is a benefit to everyone,” Lippincott said.

Houghton suggested that making it easier for drivers to access SH 130 may be what’s needed to draw more traffic to it.

“It’s unfortunate that it’s not performing,” Houghton said. “Hopefully, in the future, it will perform better with maybe some connectors back to Interstate 35 closer to San Antonio.”
Newer Post Older Post Home