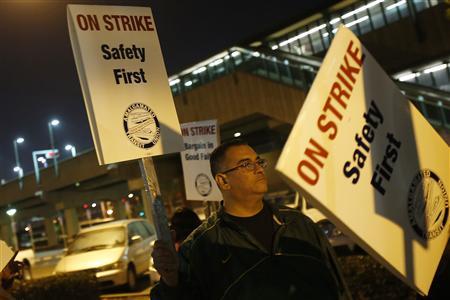 (Reuters) - Commuter rail workers in the San Francisco Bay Area walked off their jobs on Friday after talks on a new contract broke down over workplace rules, throwing the morning commute into chaos in the traffic-clogged Northern California region.

The walkout by Bay Area Rapid Transit (BART) workers shut down a rail system that carries about 400,000 passengers a day, transporting commuters back and forth between Oakland, San Francisco and outlying suburbs.

"I am mad as hell. It's a big hassle thanks to BART," said Jurgen Ware, who lives in the Bay Area suburb of Dublin and had to carpool to his job in San Francisco. He also blamed rail workers, saying they "have a stranglehold on the city."

The walkout was the second this year. BART workers went on strike for four and a half days in July, forcing some people to miss work and others to endure commutes of three hours or more.

For months BART management and employee unions have been at loggerheads over pay and benefits for more than 2,000 train drivers and other union workers who are demanding large pay raises, in part to offset being asked to contribute to their pensions and pay more for healthcare.

Under the terms of the last contract offer made public, BART said it offered a 12 percent pay raise over four years to workers, who management says earn on average $79,000 a year plus benefits. The unions put the average worker's salary at $64,000.

Union leaders have justified their demands for higher pay in part by pointing out that San Francisco and nearby Oakland are among the 10 most expensive U.S. cities in which to live.

After negotiating late every day this week, the union said the sides had finally reached an overall understanding on pay and benefits, but were at odds over workplace rules that the unions said BART had proposed at the last minute.

Unions announced the strike and a federal mediator, who had been involved in the negotiations, said he was ending efforts at conciliation because there was no more he could do.

BART commuter train service helps alleviate car traffic in San Francisco, which ranks as the third most congested metropolitan area in the United States after Los Angeles and Honolulu, according to the roadway traffic software company INRIX Inc.

Authorities promised free charter buses and expanded ferry services, but said those services were capable of transporting a limited number of people, making it likely many would have to drive into the city.

"We are doing the best we can to serve those commuters who have absolutely no other way to get into San Francisco," said BART spokeswoman Luna Salaver. "We regret that this work stoppage affects not only our customers but the rest of the region as well."

"This is a big inconvenience," said Warren Mamuntag, 48, an Oakland resident, as he lined up for a bus instead of the train he normally takes to work.

BART released a statement urging the union to put management's proposals to a vote or continue negotiating.

"It is unfortunate our union leaders have chosen to further disrupt the lives of Bay Area commuters while hurting the economy with a shortsighted strike when there are other options on the table," said BART spokesman Rick Rice.

Peter Castelli, executive director of SEIU Local 1021, said the strike would end if BART management agrees to arbitration on the work rules still in dispute.

"All of a sudden these issues that weren't discussed at the table were deal breakers," Castelli said. "We want to sign a contract, workers want to go to work, we want everyone to be able to get on with their lives."

BART train mechanic David Kwan, 59, marched alongside other workers outside of the Lake Merritt station in downtown Oakland, carrying a sign that read, "Unfair labor practice, on strike."

Kwan said he was prepared to picket every day for the duration of the strike, but many of his coworkers have families to support. "They have young children, so it will affect them more than me," he said.