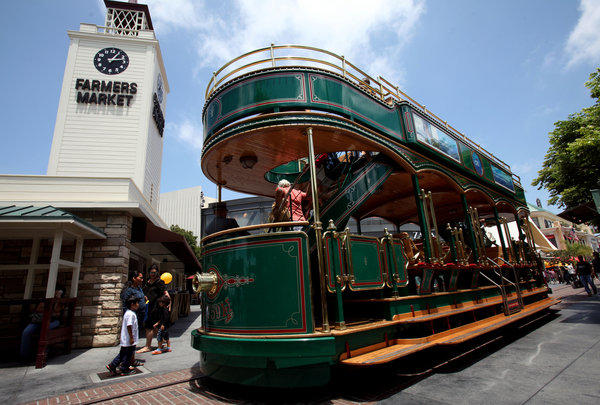 Los Angeles developer Rick Caruso has grand visions of his trolley at The Grove connecting museums and shopping complexes in the Mid-Wilshire area. He envisions the old-fashioned trolley going down Fairfax to the museums and along Third to the Beverly Center.

Months after floating the idea of a trolley that would connect the landmarks of the Fairfax neighborhood, billionaire developer Rick Caruso has teamed with the Los Angeles County Museum of Art to study whether such a transit option could really work in the trendy part of town.

A spokeswoman for Caruso’s real estate development company said Wednesday that the study would examine “a few potential routes, including several options via Fairfax Boulevard.” In a news release, Caruso Affiliated specifically proposed a connection between the anticipated Metro Purple Line subway station near LACMA and The Grove.

The feasibility study will begin this week, the statement said, and will “evaluate the opportunities and challenges of extending The Grove’s existing trolley to Fairfax and Wilshire including traffic, environment, design, engineering, and cost analysis.” The study is expected to take six to eight weeks.

“This neighborhood has become the cultural center of Los Angeles, and the trolley is an innovative way to bring people together and provide a memorable, unique experience in our city,” Caruso said in the statement. “Other cities have great streetcar lines that function very effectively. We are optimistic about finding out a way to get this done in our backyard.”

In June, Caruso began talking up the idea of extending the old-fashioned trolley that now runs through his Grove shopping center to other locations in the neighborhood, including the Beverly Center and LACMA. He told The Times then that he would throw "a significant amount" of his money toward the idea.

He also envisioned that the trolley would make a loop around the numerous attractions nearby, including the planned Academy Museum of Motion Pictures on Wilshire Boulevard, the Park La Brea apartment complex and the hip West 3rd Street shopping district.

The Caruso Affiliated spokeswoman said the company and the museum do not have a single “preferred” route in mind and will await the results of the study before laying out a more detailed plan.

Some residents in the area have expressed concern about how a trolley could run down the district's already clogged streets. They staunchly oppose laying new track, saying the trolley would jam traffic even more and present many safety issues.

Transportation experts have also questioned exactly what kind of public-private partnership Caruso is envisioning to pay for the system.