How can America pay for its roads? 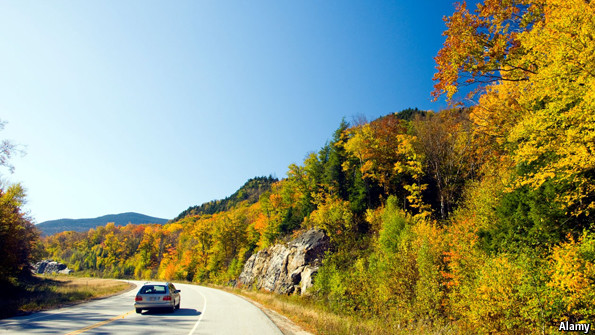 THE fuel efficiency of American vehicles has shot up in recent years, thanks to a blend of government mandates, environmental concerns and consumer fashion. By 2025 new vehicles must, by law, run at an average efficiency of 54.5 miles per gallon. That is good news for the environment and motorists (less petrol burned and bought for a given journey). But it is deeply worrying for governments. Roads and highways are funded by the state and federal taxes that drivers pay at the pump. Fewer petrol purchases means a drop in tax revenue. Since 2008 the federal Highway Trust Fund, which takes in gas-tax revenues, has had to borrow $41 billion from the Treasury to stay afloat. Officials warn it could go bust in 2015. State governments are facing similar shortfalls. How can they continue to pay for roads?

The most obvious answer is simply to bump up the petrol (gas) tax. There are strong arguments for this. The federal gas tax was last raised, to 18.4 cents per gallon, 20 years ago, around the time MS-DOS 6.2 was released. It is not indexed to inflation; since the last hike it has lost around 40% of its value. Most states also do not index their gas taxes. The Institute on Taxation and Economic Policy, a think-tank, reckons this loss of purchasing power accounts for 78% of the shortfall in federal gas-tax revenues. Moreover, the gas tax is easy and cheap to collect, and it incentivises people to drive less, which means fewer emissions.

Politicians, though, are terrified of touching the gas tax; many are quicker to call for its temporary suspension. But the change in driving habits points to a deeper difficulty. Petrol consumption used to serve as a reasonable proxy for road use, satisfying the "user pays" principle for road funding. But the rise of fuel-efficient vehicles (and electric cars, which of course pay no petrol taxes at all) has weakened the link. To get around this, officials in Oregon (which introduced America's first gas tax, in 1919), want to replace the gas tax with a vehicle-miles travelled (VMT) fee: charging motorists for the miles they drive rather than the petrol they consume. Smartphones or other GPS gizmos track journeys (so motorists are not charged for out-of-state driving), the data is processed (by a third party, if the driver prefers) and bills are sent periodically.

Oregon's legislature has been thinking about this since 2001, and has run two pilot schemes. The policy has been fine-tuned to satisfy privacy and environmental advocates. Yet a bill that would have applied a VMT fee to all new fuel-efficient cars flopped in this year's legislative session; instead, from July 2015 5,000 volunteers will take part in a scheme officials hope can in time be scaled up to a full-scale replacement for the gas tax (they will pay 1.5 cents per mile). What this long slog suggests is that the big challenge for VMT advocates will be political rather than technical. Many drivers will be extremely sceptical of government officials asking them to hand over their journey data. And legislators will take a lot of convincing to introduce a new tax; in many states, that requires a supermajority. Barack Obama's administration has dismissed the idea of a national VMT fee. Creative thinking will be needed.
Newer Post Older Post Home