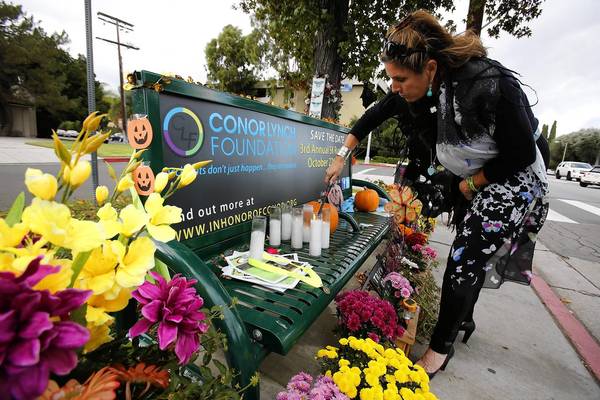 Jeri Dye Lynch lights a candle at a bus stop bench at Woodman and Addison avenues. Three years ago, her son Conor Lynch was struck and killed in a hit-and-run accident near the intersection.

They consider running a family thing. Jeri Dye Lynch and her three sons ran every chance they got — right up until the day her oldest boy, Conor, was struck and killed by a car as he crossed the street outside his high school on his way to cross country practice.

It's only fitting that since he died in 2010, Lynch has used running as a way to memorialize her child. On Sunday, the Conor Lynch Foundation held its third annual 5K race to raise money for efforts to promote safety for pedestrians, runners, cyclists and young drivers.

Almost 2,000 people turned out; most of them teenagers from San Fernando Valley schools. There were wristbands, T-shirts and a giant bus sponsored by Text Kills, with a simulator that puts kids behind the wheel while they try to read a cellphone text. They quickly inevitably wreck.


Conor Lynch was 16 when he died, a junior at Notre Dame High in Sherman Oaks. The car that hit him was driven by an 18-year-old who didn't have a license. She didn't stop, but drove on for several blocks, until she spotted a police officer, pulled over and said, "I think I hit somebody."

Some witnesses said it looked like driver Moran Biton sped up to make it through an intersection just before she hit Conor, who was dashing across busy Woodman Avenue, trying to catch up with his cross country teammates.

Biton pleaded guilty to driving without a license and hit-and-run, both misdemeanors. She was placed on probation and ordered to perform community service.

Jeri Dye Lynch was sentenced to grief, then anger, then resolve. She wanted practical measures: Digital signs that broadcast how fast a driver is traveling. The return of drivers' education classes for every high school student.

But she knows that isn't enough. She wants to change the conversation, so that dead pedestrians aren't just tragic victims, but proof of something gone wrong.

The banners on display at the memorial run Sunday brought that home: "Accidents don't just happen. They are caused."
::
A pedestrian is struck and killed, on average, almost every few days in Los Angeles.

More than one-third of motor vehicle deaths in this city involve pedestrians. That's one of the highest rates in the country, and it just keeps growing.

Many of those are hit-and-run cases — difficult for police to solve and impossible for grief-stricken families to comprehend.

"You wonder what kind of person could run somebody down and not even pull over to render aid," said Eve Bonanomi, whose son Michael was killed in August by a hit-and-run driver.

Michael Bonanomi, 35, lived in Santa Monica but was house-sitting for his parents in Studio City. He was crossing Ventura Boulevard, coming back from dinner, when a late-model white Mercedes flew by, knocking him onto its hood, then flinging him onto the street.

Police have been trying to find the car, but it didn't have a license plate. Michael's friends have been papering the neighborhood with fliers in case someone knows something. The city is offering a $50,000 reward for information on the driver.
His parents still know nothing.

They came to Conor's memorial on Sunday because the families share a bond. They didn't run, just walked around the crowded park — with pictures pinned to their chests of their smiling, handsome son.
::
Last month, the City Council moved to tighten tracking of hit-and-run deaths and enact tougher penalties for drivers who flee the scene of collisions.

That came four days after a 16-year-old boy was struck and killed outside his church in South L.A., as he left a youth group meeting. The white Nissan Maxima sped away.

Just this past weekend, two pedestrians died: A young man was killed while he tried to cross the Glendale Freeway on Sunday. Two cars hit him; only one of them stopped. On Friday night, a mother of three was run down in La Habra in a Whittier Boulevard crosswalk. Police chased and captured the driver; she's 20 years old.

You don't even have to be walking to become a statistic.

Two years ago, an infant in a stroller on the sidewalk was killed during L.A.'s downtown Art Walk by a car that jumped the curb. Two months ago, a man was killed waiting for his car at the valet stand outside a restaurant on Ventura Boulevard.

And just last week a woman was struck and killed in Inglewood. She had just buckled a baby into a safety seat and was standing next to her car. A pickup truck slammed into her, throwing her 30 feet into the air, before driving off.

The next day, the driver called police and turned himself in. He was booked for felony hit-and-run and jailed on $50,000 bail. Police credited news coverage of the case with persuading him to surrender.

It will take more than tougher laws to save pedestrians' lives. Lynch sees her job as reminding drivers, new and old, about the responsibility that being behind the wheel requires.

On a sidewalk near where Conor died is a bus bench that bears witness to the teen's passing. "Three years later and there are still always flowers there," Connelly said. "I don't know who does it."
There on Monday afternoon, lighting candles, reading cards and freshening the flowers, was Conor's resolute mother.
Newer Post Older Post Home