L.A. as a bike-friendly place? Forget it. It's too dangerous. 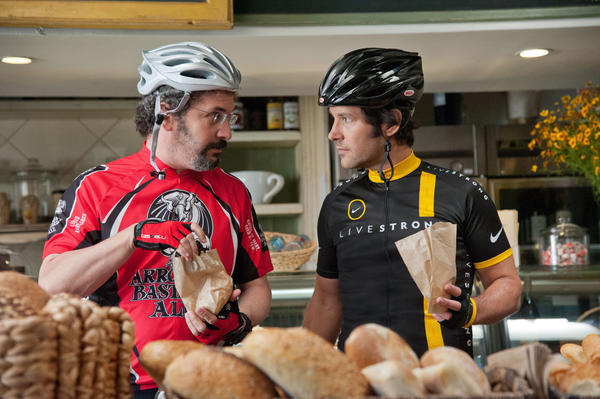 Two guys who enjoy the open roads of L.A.'s Westside from the seats of their bikes: Barry (Robert Smigel), left, and Pete (Paul Rudd), in the movie "This Is 40."

There’s Hollywood, and there’s real life. But when it comes to cycling, sometimes they’re not so different.

Take the recent Judd Apatow film “This Is 40.” Missed it? Allow me to spoil part of it for you:

Paul Rudd’s character is a sometime cyclist. Late in the movie, seeking a respite from the stress of his life, he goes zooming around L.A.’s Westside (on suspiciously car-lite streets, I might add) — until he crashes head first into the suddenly opened door of a Range Rover. Broken window. Cuts and bruises. Pain. And for good measure, the Range Rover’s driver offers not sympathy but expletives and threats, along the lines of “Look what you did” and “I’m going to need the name of your insurance company.” The whole thing ends with the two getting into a fistfight, which Rudd’s character gets the worst of, and then the driver speeding off.

My wife and I were walking around the Rose Bowl in Pasadena when a nice Mercedes passed us. Suddenly, from behind, we heard a thud. We turned to see that the Mercedes driver had done a U-turn, only to pull directly into the path of a cyclist. The bike and rider were now crumpled on the pavement. And what did the driver do? That’s right: Jumping out of his car, he shrieked at the fallen biker: “Look what you’ve done to my car!” (Sure enough, the Mercedes had a big dent in the fender.)

Of course, that’s where movie and real life parted ways. The driver, realizing that the cyclist was possibly injured — and probably seeing tickets and a lawsuit in his future -- became more conciliatory. “Are you all right?” was his next utterance. Though I never did hear an “I’m really sorry” before we walked away, with the cyclist now on his feet and probably happy to be alive.

The moral of these stories? Well, it may be just my (paranoid) view, but here goes: Whether in the movies or on the actual mean streets of L.A., for cyclists, it ain’t safe out there.

At all. Ever. If you’re on a bike, you’re invisible to the guy in the two-ton automobile.

And as a postcript, if a collision happens, you might even get the blame.

Now, I’m not anti-bike. I’ve ridden in several CicLAvias. I like to ride on the bike paths at the local beaches. I don’t begrudge those brave souls I see cycling to work or wherever.

But I would never commute by bike; I don’t even like riding on city streets. And my sense is I am far from alone.

Los Angeles has made huge strides when it comes to cyclists. Bike paths in parks and along river channels? Great ideas. But trying to make L.A. a bikeable city, one that is commuter-friendly to cyclists? Nope. Try something else. It’s just plain unsafe.
My rule? Bikes on bike paths, not in traffic.

Because like “This Is 40,” and like my stroll at the Rose Bowl — and like plenty of other far more serious and even deadly incidents — have shown, it’s the cyclists who pay the price in this Quixotic quest.

ALSO:
Wilshire Boulevard is no place for cyclists
L.A.'s potholed streets must be made safe for cyclists — or else
Should cyclists yield at stop signs? Riders and motorists weigh in.
Follow Paul Whitefield on Twitter @PaulWhitefield1 and Google +
This post is part of an ongoing conversation to explore how the city’s cyclists, drivers and pedestrians share and compete for road space, and to consider policy choices that keep people safe and traffic flowing. For more: latimes.com/roadshare and #roadshareLA.
Newer Post Older Post Home