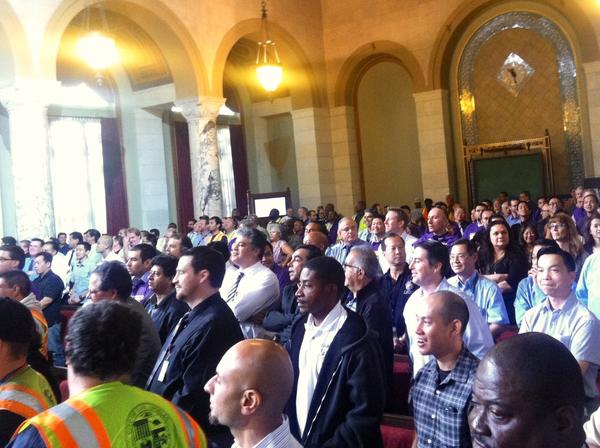 
More than 250 Los Angeles city transportation employees packed the City Council chambers Wednesday to complain about management practices they said have left the department's morale at "an all-time low."

Since general manager Jaime de la Vega was hired in 2011, high-ranking supervisors said, he has reshuffled senior staff, left key positions vacant and ignored the concerns of employees, adding to the department's workload and stress levels.

"The rank and file have lost confidence in our general manager," said Michael Hunt, a transportation engineer and a union steward. "He doesn't listen to us. He ridicules us at every chance he gets."
Wednesday's criticisms marked the first time since Mayor Eric Garetti's inauguration that the unions have publicly tried to influence whether a manager will be rehired.

When Garcetti took office, he asked the city's top managers to reapply for their jobs. At least seven department heads have been told they can stay. But the top executive at the Port of Los Angeles will retire at the end of the year and the Los Angeles Fire Department's chief will be replaced. De la Vega doesn't know if he will stay, he said.

Senior transportation engineer Brian Gallagher said the three district offices he supervises do not have enough employees to answer the phones every day. Since 2010, he said, the response time for local requests like speed bumps and stop signs has more than tripled, from 1.5 months to 4.8 months.
"I'm here today to let you know that the emperor has no clothes," Gallagher said. Audience members, some in construction vests, others in suits, applauded.

The biggest staff reductions happened before he started as general manager, De la Vega said in a telephone interview later. He said he has doubled the staff in district offices since 2011, but the number of workers still isn't back to previous levels.

Promotions and hirings are in the works, De la Vega said. He said he will also be making other appointments, including interim positions.

"Mayor Garcetti, I hope you're listening," Hunt said to the council. "We want to support you... Work with us. Come talk with us. We want to help you."
Newer Post Older Post Home