Boy, the Los Angeles region is really coming out on top lately--the highest poverty rate in California, the worst roads in the US: "The roads in Greater Los Angeles are the most deteriorated in the United States, costing drivers more than $800 a year, according to a national transportation analysis released Thursday," says the LA Times. About 64 percent of LA-Santa Ana-Long Beach roads are fuuuuucked (in poor condition), according to 2011 data; that's costing drivers about $832 a year each "including repairs, tires and faster depreciation." That's the worst out of all US cities of more than half a million people (Oakland/San Francisco comes in second, San Jose comes in third). LA has 8,700 miles of roads graded C-minus overall (see a neighborhood breakdown here), with a 60-year backlog on repairs, and the city has been trying to pass a bond to pay for quicker fixing--a first effort tanked earlier this year after neighborhood councils threw a fit (LA property owners don't like having to pay for things very much, even things they use frequently and that affect their property values, apparently. Meanwhile, they're generally in a much better position to be shelling out $832 a year on car repairs than non-homeowners--letting roads stay shitty is sort of de facto regressive taxation, but without anything to show for it.). A couple of councilmembers are hoping to get a new bond measure on the fall 2014 ballot, which will require a two-thirds majority to pass (siiiiiiigh), and meanwhile the costs keeps shooting up--they've doubled since 2005. 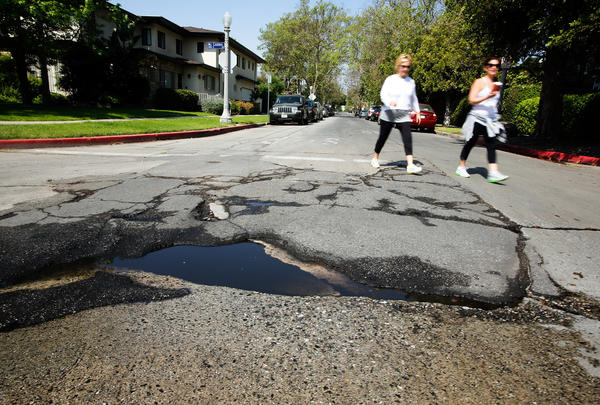 Pedestrians walk near a pothole at McCadden Place and 4th Street in Hancock Park.

The roads in Greater Los Angeles are the most deteriorated in the United States, costing drivers more than $800 a year, according to a national transportation analysis released Thursday.

Los Angeles-Santa Ana-Long Beach ranks first among cities with more than 500,000 residents for the percentage of roads in poor condition and the annual cost to drivers, according to TRIP, a Washington, D.C.-based nonprofit that studies transportation data and issues.

About 64% of roads in Greater Los Angeles are in poor condition, and potholes and rough pavement cost Southern California drivers about $832 a year, TRIP estimates, including repairs, tires and faster depreciation.

The analysis was based on 2011 data from the Federal Highway Administration. The federal government catalogs, on a scale of 1 to 100, the condition of major state and locally maintained roads and highways in urban and rural areas. The index includes potholes, utility cuts and various types of cracks.

L.A.'s sprawling 8,700 miles of roads are graded a C-minus, and a quarter received an F, according to recent Los Angeles City Council information. City staff members are studying the possibilities of a $3-billion borrowing program to fix what officials say is a 60-year backlog of repairs. The cost has doubled since 2005, and is expected to double again in the next decade.

Council members Joe Buscaino and Mitchell Englander hope to include a proposal to issue city bonds for the work on the fall 2014 ballot. A two-thirds majority of voters would have to approve issuing the debt.

Nationally, more than a quarter of major urban highways and streets are in poor condition. The same roadways handle about 78% of the 2 trillion miles driven annually in urban America, TRIP said.

The second- and third-worst urban road networks are also in California. About 60% of roads in Oakland and San Francisco are in poor condition, as are 56% of roads in San Jose.