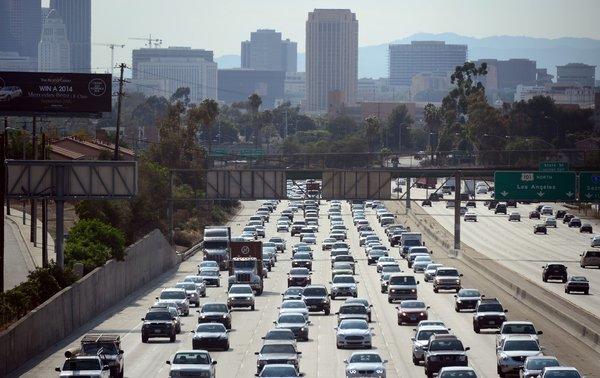 A University of New Mexico study found that nearly one-fifth of the U.S. population lives near a high-volume road, where air pollution is typically higher.

Nearly one-fifth of the U.S. population lives near a high-volume road where pollution levels are typically elevated from vehicle exhaust, a new study says.

The analysis found 60 million people living within about one-third of a mile from a busy road. In California, 40% of the population lives that close to traffic, the highest of any state.

“It’s a surprisingly large proportion of the population,” said Gregory Rowangould, a professor of engineering at the University of New Mexico who used U.S. Census and Department of Transportation traffic data to conduct the nationwide tally.

The study found similar results across all regions of the country, suggesting traffic pollution is not only an urban issue but “potentially a much larger and more widespread public health concern.”
Researchers have known for years that air pollution levels are higher along major roads, putting people who live nearby at greater risk of respiratory illness, including asthma and lung cancer.

The study also found that non-white and low-income residents are more likely to live near busy roadways and that most counties do not have monitors to measure air pollution levels close to traffic.

“If there's no monitor, a potential violation is not going to be detected, and there's not going to be the additional regulations that can help clean up air pollution in that area,” Rowangould said.
That is set to change in some places starting Jan. 1, when air quality officials in more than 100 metropolitan areas across the country must begin to install air pollution monitors near busy roadways under new rules from the U.S. Environmental Protection Agency.

The study, published in the journal Transportation Research Part D: Transport and Environment, counted people near roads where more than 25,000 vehicles travel each day, a traffic density that Rowangould said represents “the lower limit of roadways with health impacts.”

The study tallied the population within 500 meters of traffic. That's about 1,640 feet, a wider swath than the 300 to 500 feet environmental regulators have used to measure the population near roadways.

While past research has shown air pollution levels drop off significantly a few hundred feet from traffic, recent studies have found pollutants from cars and trucks can drift more than a mile downwind.
Newer Post Older Post Home