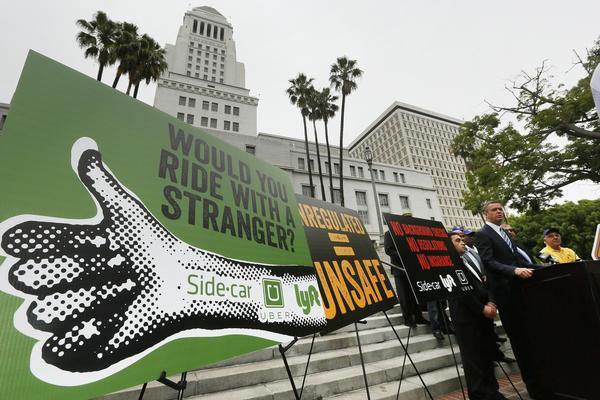 The state Public Utilities Commission issued rules last month to govern how Uber, Lyft and other Web-based transportation services operate in California. But the PUC's action didn't satisfy the taxi industry and its allies, including Los Angeles City Councilman Paul Koretz, who don't want the state to take the regulatory wheel.

So Koretz is trotting out an argument familiar to anyone who's sought to block a competitor from entering the market: He contends that the PUC violated the California Environmental Quality Act.

That's not Koretz's sole argument against the PUC's new regulations, mind you. In an interview Tuesday, he said that the rules were inadequate in many ways to protect the public against fraudulent and unsafe ride-sharing services. And even if the rules were adequate, he argues that the PUC doesn't have the resources to enforce them. He's also worried that the new services won't serve the disabled or low-income areas in the city, which taxi companies are required to do. "It just seems like almost all negative for the consumer," he said.

In the motion that's pending before the City Council, Koretz also argues that the new services compete unfairly with cab companies because they "operate outside the rules and regulations established for passenger carriers such as taxis." And he contends that the PUC's decision violates the state law that gives cities the right to "regulate the supply of vehicles in the taxicab market."

The problem with these arguments, though, is that Uber, Lyft and other Web-based services aren't taxicab companies. They're technically "charter party carriers" because they offer rides only by pre-arrangement -- in their case, by using a smartphone app to summon a driver. And state law grants the PUC exclusive jurisdiction over charter party carriers.

The CEQA argument, on the other hand, challenges the legitimacy of the PUC's rule-making. Koretz's motion contends that the commission didn't "consider the wider environmental, economic and road safety impacts through the addition of thousands of for-hire vehicles that could increase congestion and pollution." It adds: "These environmental impacts were not analyzed and no opportunity for public input was provided, which violates the California Environmental Quality Act."

According to Tom Adams, a board member at the California League of Conservation Voters and an expert on CEQA, the act comes into play whenever an agency takes an action based on its discretion, as long as a "fair argument" can be made that the action "may have a significant effect on the environment." In that event, the agency has to prepare an environmental impact report or issue a finding that the environment won't be hurt by the action.

The PUC did neither. Instead, it determined that there was no need for an environmental review at this point, according to Andrew Kotch, an information officer at the commission. That's because "the number of miles driven around will likely not increase because [the new services' cars] only go to a customer upon request, unlike some cabs that roam the streets," Kotch wrote in an email.

In other words, even if Uber, Lyft and company somehow draw "thousands of for-hire vehicles" into the city, the PUC sees them as substitutes for cabs, not additional cars. That makes sense intuitively; it's unlikely that Angelenos will abandon trains, buses and sidewalks in droves for a much more expensive alternative, even if that alternative is more efficient than a cab. And by driving fewer miles than the taxis they displace, the new services may actually reduce congestion.

In its order, the PUC teed up a CEQA review when it revisits the new services and regulations through a series of workshops next year. “Workshop topics will include, but not necessarily be limited to, a consideration of safety, competition, innovation, accessibility, congestion, the California Environmental Quality Act, and other pollution related issues," the order states.

A party trying to force an agency to follow CEQA doesn't have to prove that the environment will be significantly affected, but it can't simply speculate that the agency's action would have such an effect. "There must be some 'substantial' evidence," Adams wrote in an email. "Typically that takes the form of an opinion from an expert, but it could come from a study that has been published somewhere."
Newer Post Older Post Home