Seattle Mayoral Candidates: Who Pays if Tunnel Goes Over Budget? 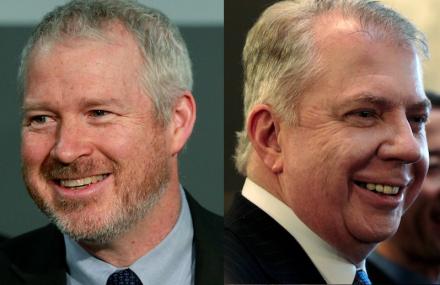 What if Seattle gets stuck with cost overruns on the Alaskan Way Viaduct replacement project?
That question sparked a lively exchange on KING-TV between the two candidates for mayor of Seattle during their first televised debate.

During the hour long debate sponsored by KING-TV, KIRO-FM and The Seattle Times, Mayor Mike McGinn and Sen. Ed Murray traded jabs on everything from leadership style to police reform.
But their discussion of the tunnel project raised one of the most interesting questions.

Will we have to pay more in taxes if Bertha runs into additional delays? Bertha, of course, is the machine digging the massive tunnel that will replace the viaduct.

The discussion began when Murray charged, as he did throughout the debate, that McGinn has been a divisive leader. Case in point, he said, was McGinn’s assertion during the last election that he supported a tunnel replacement for the viaduct, then opposed it once he got into office.

McGinn replied that he wasn’t opposed to the viaduct, just to the city being saddled with any cost overruns. Now that the project is underway and there have been slow downs with Bertha, McGinn says it remains a valid concern.

“I raised an important question, a question that remains unanswered as to who will pay cost overruns and Senator Murray’s position is that it’s all right for everyone to be angry at me for asking a question like that. Let’s say there was a 10 percent cost overrun on that. That’s $200 million. That’s a lot of money in our city budget to come up with,” McGinn said.
And, McGinn reminded the audience, Murray voted for the
transportation bill in the Legislature that included the requirement that Seattle pay the cost overruns. Murray said although he didn’t like the provision at the time, he thought it important to vote for the overall transportation package.

“There are no perfect bills,” he said.

Murray was then asked what he would do if he became mayor and there were cost overruns.

“I believe I have the relationship with Olympia, as mayor, to go down there and remind Olympia this is a state highway and they have a responsibility. The taxpayers of Seattle should not pay for it and I would not support a tax in Seattle to pay for it,” Murray said, to which McGinn quipped, “I’d like Senator Murray to stay in Olympia and use his influence to make that happen.”