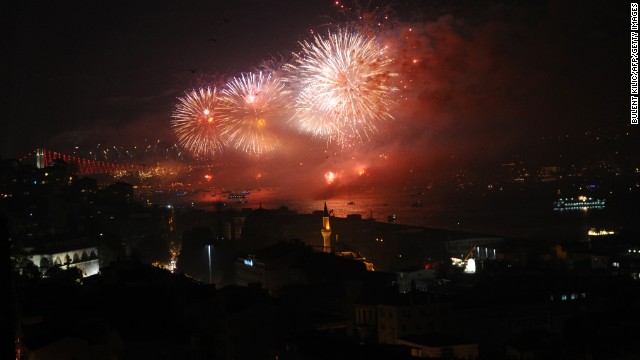 Fireworks explode above the Bosphorus Strait in Istanbul, Turkey, on Wednesday, October 29, during the anniversary of the declaration of the Turkish Republic. Turkey formally opened the world's first sea tunnel connecting two continents. The 8.5-mile long tunnel linking Istanbul's European and Asian sides includes an immersed tube tunnel which officials say is the world's deepest, at nearly 200 feet below the sea level.

Istanbul's new transcontinental train tunnel under the Bosphorus Strait had a bumpy first day of operation, a day after Turkey's Prime Minister called it a "project for whole humanity" at an inaugural ceremony.


On Wednesday, Turkey's state railway confirmed reports there had been a power outage in the tunnel system
.
"Emergency situation procedures" were also carried out multiple times, the agency said in a statement posted online, because passengers hit emergency buttons aboard the trains.

Turkish journalists complained of being barred from entry into the railway system after the breakdowns took place.

Amateur video posted on YouTube showed scores of passengers leaving a stopped train and walking down the long tube that has been constructed underneath the rushing waters of the Bosphorus Strait, effectively linking the European and Asian halves of Turkey's largest city.

Because of an unexpectedly large volume of curious first-time passengers, the railway agency also said it had decided to skip one of the stops on the train's transcontinental route.

The Marmaray Tunnel is part of a $4.5 billion, 76-kilometer (47-mile) megaproject launched by the Turkish government in 2004.

The rail system, built by a Turkish-Japanese consortium, is expected to have a capacity of 1.5 million people a day, connecting the two continents in about four minutes. The 13.6-kilometer (8.5-mile) tunnel -- the deepest of its kind -- passes under the Bosphorus Strait, one of the busiest shipping arteries in the world.

The financial capital of Istanbul, with a population of nearly 15 million people, is often snarled with traffic, with about 2 million residents making the crossing between continents on a daily basis.
Beyond the size of such an undertaking, digging for the Marmaray uncovered about 40,000 artifacts and helped archaeologists trace Istanbul's history back 8,500 years, 2,500 more than ever believed before.

However, the discoveries delayed the project for four years, which frustrated the Prime Minister who, analysts and businessmen say, wants to put a permanent imprint on Turkey's financial capital.

The project also had to account for Turkey's long history of violent earthquakes and the tunnel's position parallel to a major fault line. Transport minister Binali Yildirim has outlined the precautions, saying the tunnel allows movement and is designed to handle a quake of 9.0 magnitude.

The Turkish government has also begun construction of a third suspension bridge across the Bosphorus Strait. It also plans to build a third airport for Istanbul and dredge a canal to run parallel to the Bosphorus.

The massive government-backed development projects have become a politically polarizing issue in Turkey.

Anti-government protests erupted last summer after the government announced plans to bulldoze a park in central Istanbul and replace it with a shopping mall.

As government officials and crowds of supporters applauded the Marmaray tunnel's inauguration Tuesday, in other parts of Istanbul, riot police clashed with demonstrators protesting the Turkish government. 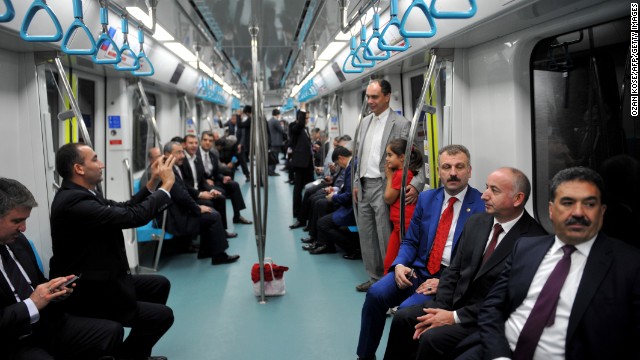 People travel from the Uskudar to the Yenikapi station on the day of the inauguration of the tunnel.