A Stroll Around the World

ON THE GULF OF AQABA, Jordan — I AM walking across the world. In January I set out on foot from Herto Bouri, an early site of Homo sapiens fossils in the Rift Valley of Ethiopia, to retrace the pathways of the first anatomically modern humans who colonized the planet at least 60,000 years ago. My finish line is in Tierra del Fuego, at the chilly tip of South America, the last nook of the continents settled by our ancestors. This long ramble will last seven continuous years. It will span 21,000 miles. (I have logged about 1,700 miles to date.) 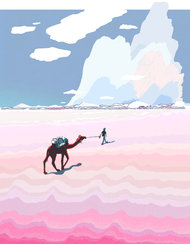 I’m writing dispatches along the way for National Geographic on subjects as varied as human evolution and conflict, nomadism and climate change. The “Out of Eden Walk,” as I’m calling it, uses deep history as a mirror for current events. But even as I adhere strictly to my brand of bipedal journalism, trying as it were to put myself in a Pleistocene state of mind, cars keep roaring into my awareness. They are inescapable. They are without a doubt the defining artifacts of our civilization. They have reshaped our minds in ways that we long ago ceased thinking about.

As I inch from the poorer subtropical latitudes into the richer temperate zones of the planet, for example, there has been a dramatic shift in human consciousness.

At the walk’s start in the Horn of Africa, one of the last habitable places on earth where automobiles remain scarce — according to the World Bank, Ethiopia musters perhaps two or three motor vehicles per 1,000 people — walking was a near-universal activity. The Rift Valley desert and people’s relationship to it are still shaped by the human foot. Trails unspool everywhere. Everyone functions as a competent walking guide — even small children.

But once I crossed the Red Sea on a camel boat to the Middle East, where car ownership explodes to 300 or more vehicles per 1,000 citizens (the figure in the United States balloons to about 800), I’d entered a region subjugated utterly by the vulcanized rubber tire.

In Saudi Arabia, I had trouble simply communicating with motorists who have lost the ability to imagine unconstrained movement to any point on the horizon. Asking directions is often pointless. Like drivers everywhere, their frame of reference is rectilinear and limited to narrow ribbons of space, axle-wide, that rocket blindly across the land.

“Why did you leave the road?” one Saudi friend asked me, puzzled, when I improvised an obvious shortcut across a mountain range. “The highway is always straighter.”

To him, the earth’s surface beyond the pavement was simply a moving tableau — a gauzy, unreal backdrop for his high-speed travel. He was spatially crippled. The writer Rebecca Solnit nails this mind-set perfectly in her book “Wanderlust: A History of Walking”: “In a sense the car has become a prosthetic, and though prosthetics are usually for injured or missing limbs, the auto-prosthetic is for a conceptually impaired body or a body impaired by the creation of a world that is no longer human in scale.”

I just call it Car Brain.

The incidence of Car Brain grows with rising latitudes across the surface of the world. (Then it vanishes at the poles, where Plane Brain replaces it.) In the affluent Global North, this syndrome will be familiar to any hiker who has had to share a walked landscape with motor vehicles.

Cocooned inside a bubble of loud noise and a tonnage of steel, members of the internal combustion tribe tend to adopt ownership of all consumable space. They roar too close. They squint with curiosity out of the privacy of their cars as if they themselves were invisible. In Saudi Arabia, this sometimes meant a total loss of privacy as Bedouins in pickups, soldiers in S.U.V.’s and curiosity seekers in sedans circled my desert camps as if visiting an open-air zoo, gaping at the novelty of a man on foot with two cargo camels. Other motorists steered next to my elbow for hundreds of yards, interrogating me through a rolled-down car window. (Not to pick on Saudi Arabia, which is no worse than any other Car Brain society, but exactly one driver in 700 miles of walking in the kingdom bothered to park and stroll along for a while.)

More striking than a Car Brain’s impaired road etiquette, though, are the slow pleasures it misses in life.

The Car Brain will never know the ceremony of authentic departures and arrivals. Towns and villages that were mere smears of speed along busy superhighways were celebratory events savored by my Saudi walking partners and me. Our step lightened with anticipation as we wandered into the outskirts. We laughed. We felt good: flushed with accomplishment. Similarly, packing our camel bags and walking out of a town was a special moment — an embarkation that signaled a tangible advance through space and time, and not the commuter’s inconvenience of simply “getting there.”

Car Brains have lost all knowledge of human interactions on foot. People stiffen when they see a pedestrian approaching from a distance. But they relax and smile as they hear your voice, see your empty (unarmed) hands. In Africa and in the remnant pastoral communities of Arabia you must stand dozens of yards away from huts and homes, waiting politely to be noticed, before exchanging greetings. A lovely courtliness marks these bipedal encounters.

AND then there is simply the act of traveling through the world at three miles per hour — the speed at which we were biologically designed to move. There is something mesmerizing about this pace that I still can’t adequately describe. While roaming the old pilgrim roads in Saudi Arabia, I came to understand how the journey to Mecca — the hajj — in the pre-airline days was perhaps as important as reaching Islam’s holiest city. Watching the Red Sea slide by my left shoulder as I walked north, seeing the white desert coast dance with ink-blue waters as one bay after another scalloped by, put me in a meditative trance that must be primordial.

These are natural, limbic connections that reach back to the basement of time — ones that Car Brains rarely experience. I must continually remind motorists that what I am doing is not extreme.

Anthropologists have strapped G.P.S. devices to the Hadza people of Tanzania, among the last hunter-gatherers left on earth, and discovered that the men walk on average seven miles a day in pursuit of game. (Women a little less.) This adds up to 2,500 miles annually, or tramping from New York to Los Angeles every year. Given that this ancient economy is one that dominated 95 percent of human history, walking that distance is our norm. Sitting down is what’s radical.

I have nothing personal against motorized travel. Cars build middle classes. They grant us undreamed-of freedom. And I suspect that I’ll be driving away from my walk’s end point in Chile in 2020. But it’s probably inevitable that, as I plod through the Middle East, Asia and the Americas over the next six years, I’ll become increasingly alienated from the growing bulk of humanity afflicted by Car Brain. The internal combustion engine has affected more drastic changes on human culture — flattening it through the annihilation of time and space — than the web revolution. Indeed, the century-old automotive revolution prepared the way for the rise of the Internet, by eroding the capacity for attention, for patience, by fomenting a cult of speed.

It can be lonely out here among the Car Brains. Sometimes, out walking, I feel like a ghost. Already, I have to seek out society’s marginal people to find my way across the planet. Settled nomads. The ambulatory poor. The very ancient, whose mode of transport is still a donkey or maybe a cart, elders who haven’t forgotten about earned distances. They point to referents beyond the aphasia of paved roads. I take my compass bearings off their paupers’ hands.